Got a question on astronomy that you'd wanted to ask? Ask your questions here and see if the old timers can give you some good answers.
Post Reply
108 posts 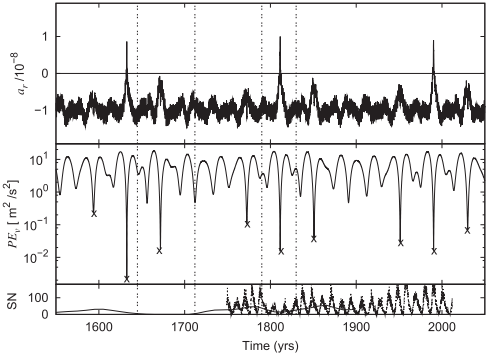 From the barycentric perspective, the trough period of the Grand Solar Minimum occurring during the anticipated solar minimum in February 2030, is the recurrence of a 220-year long-range solar cycle as a result of a long period barycentric alignment of the four gas giants with the mass center of the Sun and the barycenter of the Solar System. As a result of the near superior conjunction of Saturn-Sun-Jupiter during the anticipated solar minimum with Uranus and Neptune positioned at the side of Saturn away from Jupiter and the Sun, the mass center of the Sun would cyclically approach very near to the barycenter of the Solar System in late March 2030, which would coincide with the trough period the solar cycle 26 around its solar minimum.

The full-blown effects of the 220-year long-range solar cycle occurring to Earth after the solar maximum in October 2023, could be expected to begin thereafter till it reaches the deepest trough of the anticipated Grand Solar Minimum in late March 2030 when the mass center of the Sun approaches very near to the barycenter of the Solar System, and its effects would then oscillate to wean off thereon.

From the barycentric perspective, a Grand Solar Minimum is indeed imminent.
Last edited by Vincent_WF on Sat Oct 24, 2020 12:03 pm, edited 10 times in total.
- The entire observable universe is subliminally paradoxical.
- By realizing the paradoxical effect of nature, it enlightens on how natural phenomena could be negated to render their delusions in a typical obfuscated manner.
Top

The mass center of the Sun with the orbital motion of the major Solar System objects would cyclically cause it to be positioned very near to the BOTSS. The Sun when cyclically positioned at its nearest approach to the BOTSS, is therefore spiraling at its lowest angular momentum. Hence, with reduced total solar irradiance from the Sun during the solar minima, and also the long-ranged cyclical alignments of the Solar System objects with their tidal effects that extremely intensify the nested polar vortex on the Earth during the winters caused by the orbital forcing of its axial tilt, these effects therefore could cyclically render the Little Ice Age phenomena on Earth that would be synchronized with the grand solar minima during the troughs of the solar cycle. 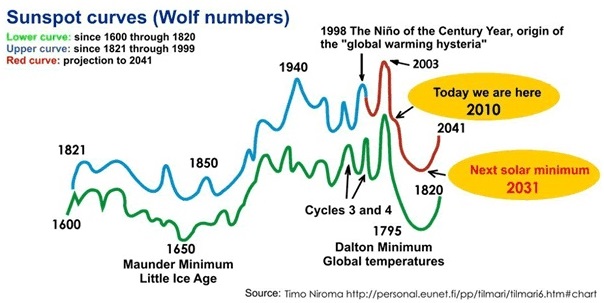 “Local physical laws are determined by the large-scale structure of the universe.” - Mach's principle
Last edited by Vincent_WF on Sat Oct 24, 2020 9:47 pm, edited 1 time in total.
- The entire observable universe is subliminally paradoxical.
- By realizing the paradoxical effect of nature, it enlightens on how natural phenomena could be negated to render their delusions in a typical obfuscated manner.
Top 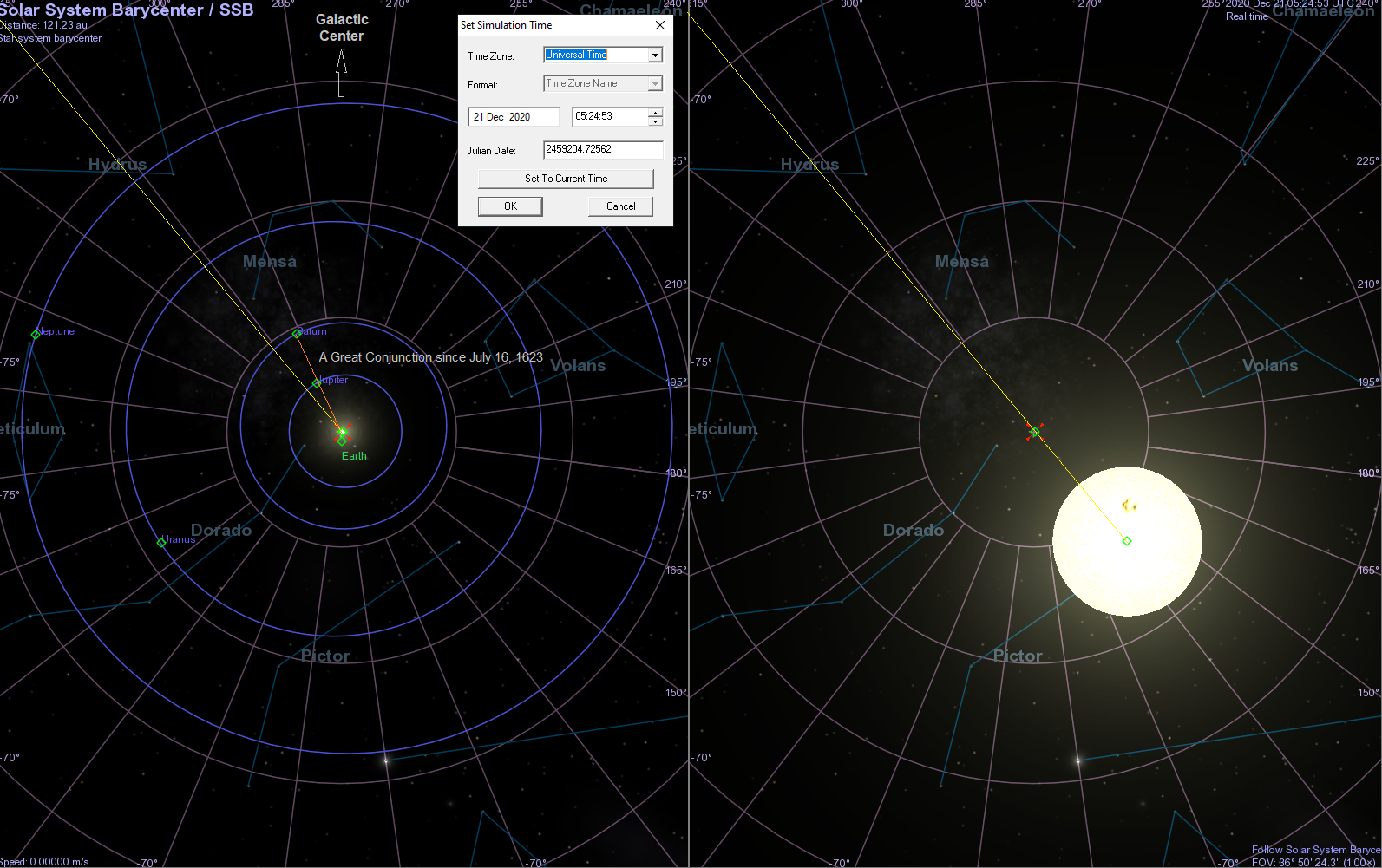 This visual analysis is predicting the solar maximum of the solar cycle 25 would occur in October 2023 with the Sun-SSB-BJS-BUN alignment in phase 3 of the 3-body motion. AAnd with the comparative analysis of the past solar cycles, it predicts at this solar maximum the Sun would switch its magnetic pole to the reversed state when SSB moves in between the alignment of Sun and BJSUN in solar cycle 25. Uranus and Neptune would not be perturbing the periodicity of this solar maximum rendered with this BJS cycle as a result of BUN would also be in the alignment. 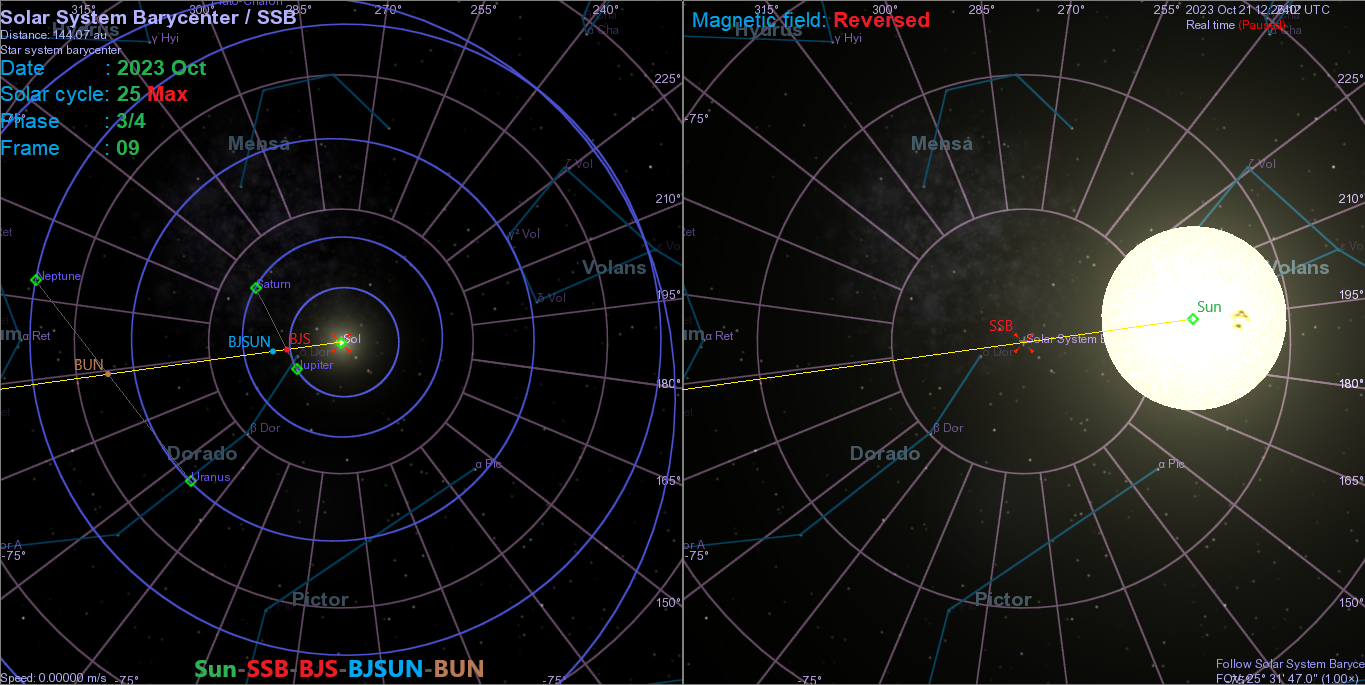 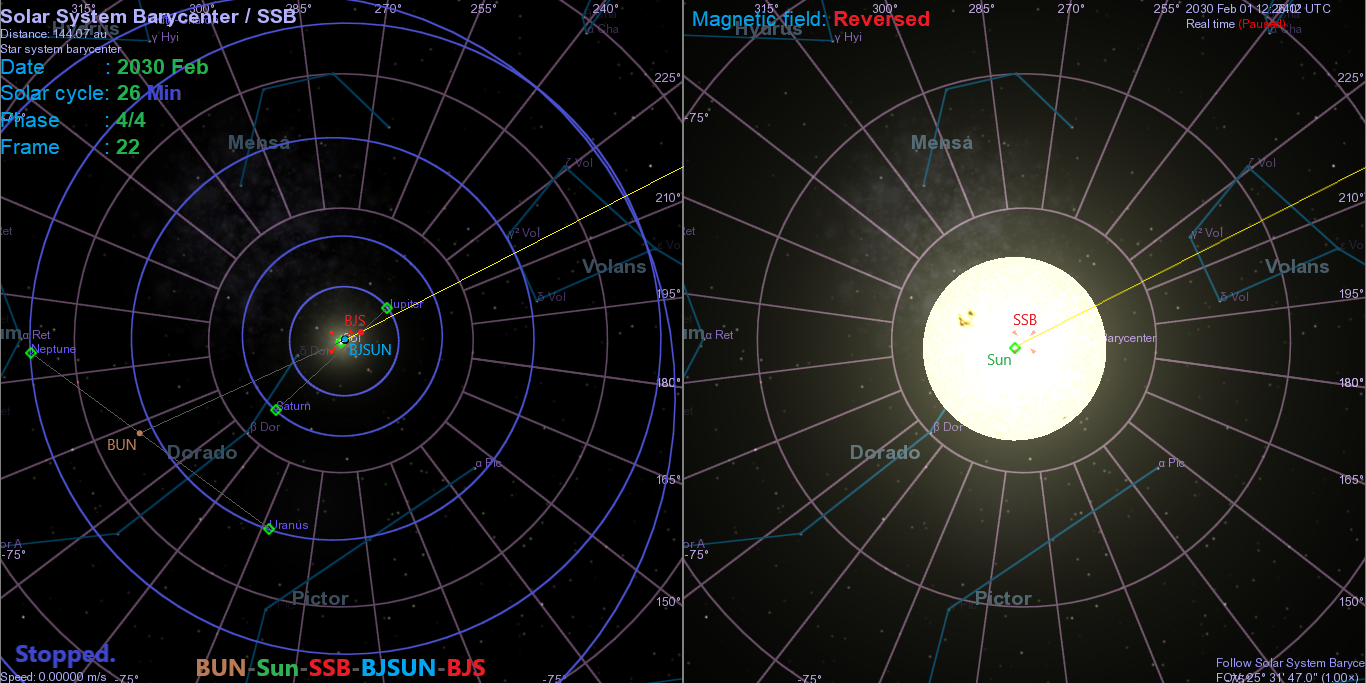 Disclaimer: This barycentric planetarium of Celestia is based on its quasi Solar System Barycenter (SSB), which is not the actual BOTSS. Consequently, the actual dates for the solar minimum of solar cycle 26 could slightly vary for the case study of this solar cycle when the mass center of the Sun is positioned very near to the BOTSS. Also, this animation was mostly sampled at six-month intervals with rough estimations, and there could be E&OE of the manual works.
Last edited by Vincent_WF on Sun Nov 08, 2020 6:24 am, edited 2 times in total.
- The entire observable universe is subliminally paradoxical.
- By realizing the paradoxical effect of nature, it enlightens on how natural phenomena could be negated to render their delusions in a typical obfuscated manner.
Top In the UVS worldview, the postulated cosmic bubbles are nested clusters of vortical hyperspheres.

This new theory suggesting dark matter may have been forged by cosmic bubbles is coherent with the cosmological model of UVS.

From the UVS perspective, dark matters are intrinsically formed minute vortical hyperspheres, which are resonated to quantize in the nested vortical hypersphere of the cosmos. And supervoids are the vortical hyperspheres of the macrososm, in what the theory described it as cosmic bubbles.
- The entire observable universe is subliminally paradoxical.
- By realizing the paradoxical effect of nature, it enlightens on how natural phenomena could be negated to render their delusions in a typical obfuscated manner.
Top

This barycentric analysis as shown with the yellow line sketched in the chart, shows the 11-year solar cycle is largely correlated with the barycentric alignment of Sun-SSB-BJS.

For SC14 Max, it is showing in the sunspot cycle chart with the Sun-SSB-BJS alignment there was only around 100 sunspots counts (traced with the roughly sketched yellow line). With reference to the sunspot cycle chart, the animation is also showing the oscillations of BJSUN in the Sun-SSB-BJSUN alignment had fluctuated the sunspots counts to above 175 in three upward spikes when BJSUN was aligned, and fell below 50 in three downward spikes when BJSUN had moved out of the alignment.

To inspect the elements in the SIDC sunspot chart, visit the UVS webpage on "The barycentric drivers of the solar cycle" by clicking on the boxes in the chart to show the respective barycentric alignments.

This animation at a higher sampling rate is showing the oscillation of BJSUN with the alignment Sun and SSB, is correlated with the minor fluctuations of the 11-year solar cycle. (Remark: Needs a much higher sampling rate and screen resolution to properly see this, which the hardware of my PC at the moment could not handle for producing such high-res animation.)

In the reference frame of SSB that aligns with the barycenter of Jupiter, Saturn, Uranus, and Neptune (BJSUN as a cyan dot), the animation showed BJS (as a red dot) was revolving around the BJSUN with its clockwise differential revolution against the cyclonic motion of the gas giants.

This is the basis for the barycentric predictions for solar cycle 25.

Nonetheless, it would still be necessary to thoroughly investigate the entire solar cycle records with an interactive barycentric planetarium application with the capability to more accurately indicate and show how the barycenters of the gas giants were dynamically revolving around the barycenter of the Solar System.

P.S. A person responded to program the add-on for indicating the barycenters with a barycentric planetarium applet, told me he would only be free after one year later. Hence, has to make do with these manually drawn indicators in the planetarium charts for the time being.
- The entire observable universe is subliminally paradoxical.
- By realizing the paradoxical effect of nature, it enlightens on how natural phenomena could be negated to render their delusions in a typical obfuscated manner.
Top

The fluctuations of the solar cycle

The fluctuations of solar cycle 1 were briefly investigated with a simulated barycentric planetarium that improvised to show the alignment of Sun and SSB.

However, not every fluctuation demonstrated planetary alignment.

Nonetheless, this cursory case study is sufficed to show the solar cycle fluctuations were largely correlated with the erratic planetary alignments of the major Solar System objects and their barycenters.

The finding of this case study warrants a thorough investigation of the entire solar cycle records.

“Although his (UVS) model is lacking quantitative method, yet he is able to predict solar cycle fluctuations.” (17th Feb 2020) - Dr. Victor Christianto & Dr. Florentin Smarandache.
- The entire observable universe is subliminally paradoxical.
- By realizing the paradoxical effect of nature, it enlightens on how natural phenomena could be negated to render their delusions in a typical obfuscated manner.
Top 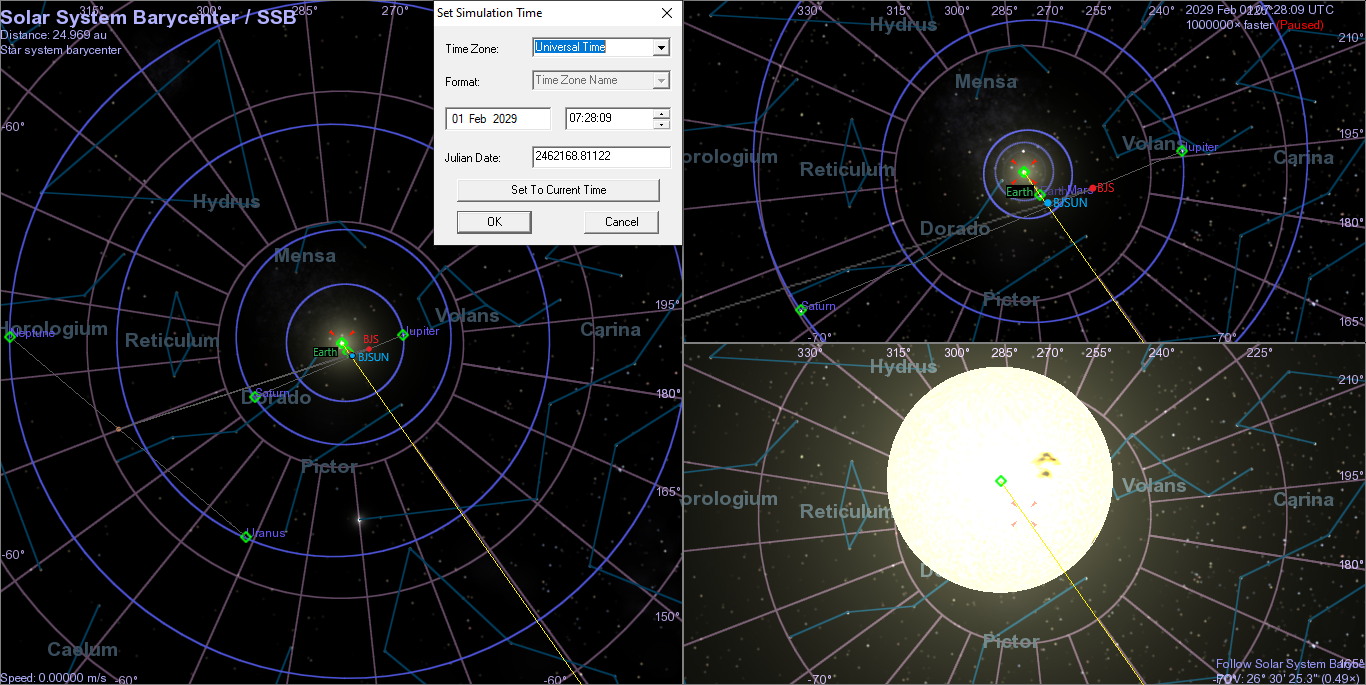 In 2029 the barycenter of Jupiter, Saturn, Uranus, and Neptune (BJSUN) would have entered the inner Solar System.

And this barycenter has the mass effect of the four gas giants summed up.

It's orbital forcing at close proximity to Earth could cause much upheaval with severe geology events happening on Earth till it leaves the inner Solar System in 2032.

A mere brushing over by BJSUN on Earth could completely eclipse the 1908 Tunguska event.

No telescope or any kind of space watching observations could see it coming.