Alright, this is for sharing of your observation experience. Or, if you are arranging gatherings, star-gazing expeditions or just want some company to go observing together, you can shout it out here.
Post Reply
5 posts • Page 1 of 1

This marks my third and final chance of the year to go mersing, after a super wet Feb trip and a pretty good April trip. As I had to really make it count (last chance to eyeball DSOs under dark skies), I went to the Bugis/Waterloo street Kwan Ying temple to pray the week before for clear skies and as well as other personal stuff.

Rough run down of scopes present this time round:

Imaging setups : Too many to list , almost close to 15 imaging telescopes+ EQ mount+ cameras (DSLR or CCD) + Laptops present (must be some kind of
record)

This trip was quite special for me as some colleagues and research staff from my workplace in NUS wanted to come along as they have been aware of my stargazing activities (via FB) for quite awhile. So leading up to the trip there was quite a high level of anticipation...and also abit of stress should the weather turn out to be bad...LOL

Anyway as per reaching the chalet grounds, we prepared to set up the scopes in readiness of the first sign of darkening. I did have abit of a hiccup for my dobsonian , the new finderscope base mounting that i newly installed was blocking the path of the Truss tube connection plate. (ohshit x 10) . I borrowed a screwdriver from Zongyang to unscrew it and shift it one hole to the left. Unfortunately the 8x50 finder i was using was too heavy to be supported off center.....(crap). Luckyily Clinton brought along a spare RDF and he loaned it to me for the entire duration of the trip. Thanks guys and deeply appreciated, without any form of finder instrument I would have lugged a 15kg weight to Mersing for nothing!

First night was off to a pretty good start until the dreaded clouds started to roll in about 11pm or so....so I went to sleep for till about 2am , and it was still pretty bad. Only when 5am came around and suddenly the sky cleared to give us views of some of the DSOs that were present in the early morning like Pleaides , and of course the ever Popular Orion Nebula. Using the mewlon, I managed to find and locate Neptune. However the sky seems to have abit of High clouds by then and so more or less the view of Neptune was not as crisp as how i remembered it in Sept 2016's trip...

2nd day came around and towards the late afternoon , two guys drove up in a SG car . Out stepped Lton and Sam (whom I have not seen in almost 8 years). I knew he was coming with the R200ss that i sold off in 2007 (Sam is the third owner) so it was sort of a mini reunion/homecoming of the scope for me . attached are some photos of the scope OTA! 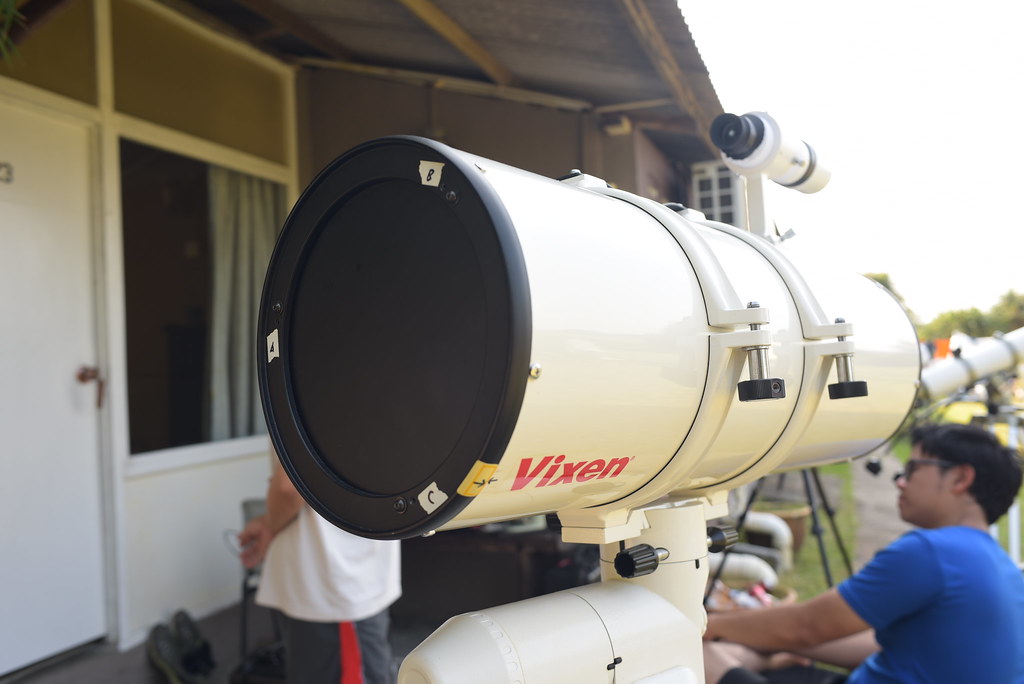 DCN_0120 by Zhung Wei Poon, on Flickr
Even the original collimation screw stickers and 2 arrows were still well preserved, after so many intervening years! 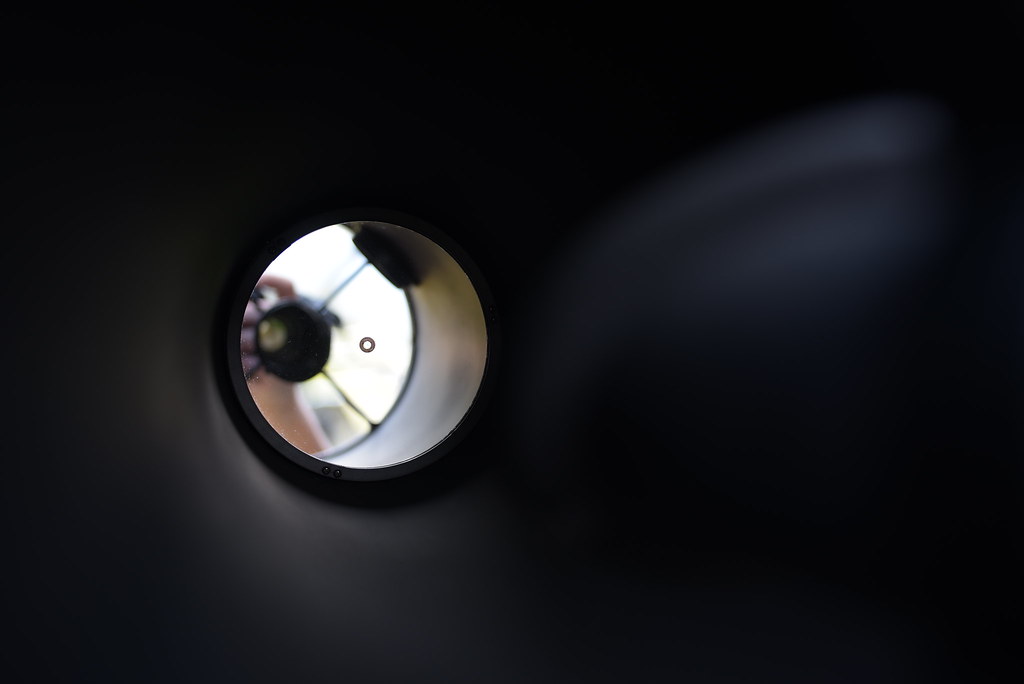 DCN_0125 by Zhung Wei Poon, on Flickr
Had to self install/stick the center doughnut of the 8inch mirror back then , as seen by the uneven black marker colouring of the white ring (zoom in on Flickr to see)

Anyway enough of the gushing of reuniting with an ex-telescope. Remus gave a short and informative talk at the aircon classroom about Practical Astronomy for all the first timers. There was also a heartwarming photo-montage of Mersing trips over the past 20 years!

Just before dinnertime on saturday , we were greeted with a fantastic display of crepuscular rays : 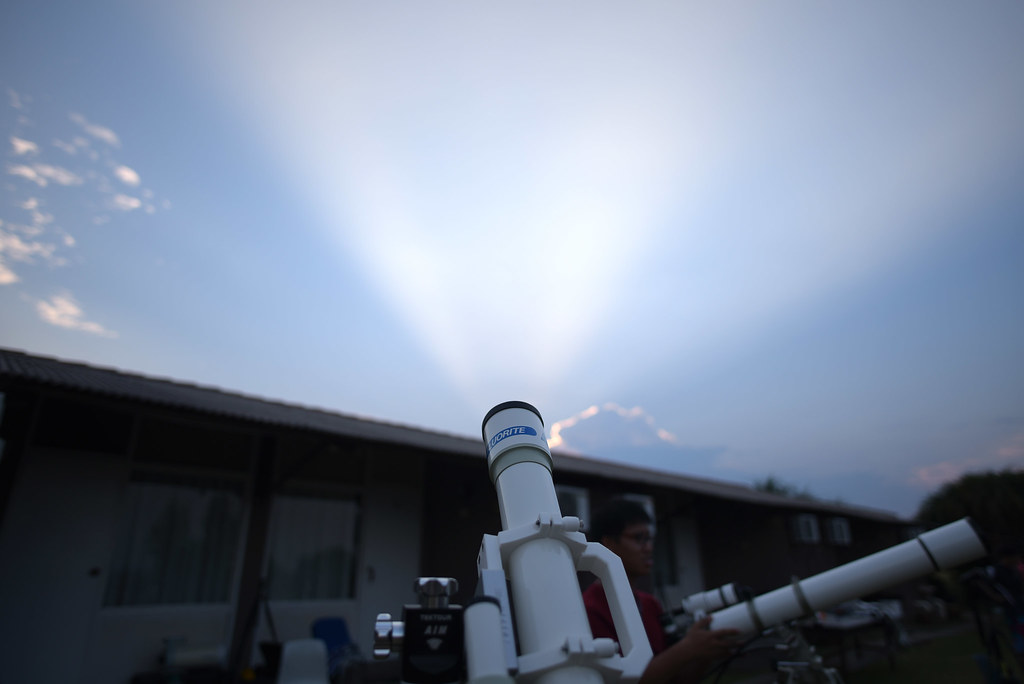 And the best thing about night two is ...it was nearly cloudless from sunset to sunrise! What a rare occurance for mersing trips nowadays!

Some of the notable objects observed (in no particular order)
- Comet V2 Johnson (Lton commented : "Johnson & Johnson comet? must smell nice!"
- Omega Centauri Globular Cluster
- Swan/Omega Nebula (or as i like to call it: The William Optics logo nebula)
- Prawn Nebula
- Saturn at high power mag. of 320x (one of my colleagues said ...wah looks like a photo online...haha)
- Cat's Paw Nebula
- Eagle nebula
- Veil Nebula Supernova Remnants both eastern and western arc. An attempt was made to view Pickering's triangle but I can't be very sure , maybe caught a slight hint of it
- Ring Nebula (Doughnut in space)
- Rose cluster (NGC 7789 , discovered by Caroline Hershel)
- Dumbbell nebula
- Saturn Nebula (small and cute, does look like an off-focused Saturn)
- A lot of star clusters
- Uranus (the high powered view on the second night was better than Neptune on first night , the background was really black and the pale green colouration was pretty obvious...too bad about it having an unfortunate-sounding name, making it the butt of many jokes)
- Helix nebula
- Sculptor galaxies, the one with the uneven brightness and the other one with 2 stars seemingly aligned to the core at an angle
- Andromeda Galaxy with its satellite companions
- Venus

Some missed targets that I tried but could not see :

- Cresent nebula NGC 6888 , so much nebulosity in the region that it was confusing.
- Blinking Planetary neb , saw it in April through Kelvin's mewlon in April , this time failed to find it again.
- Red Spider nebula , NGC 6537, i really tried to catch this but at magnitude 13 , i think i may be overconfident of the 12inch mirror's light gathering power..oh well.

Anyway the entire 2nd night was abuzz with activity, many pple stayed awake especially the imagers! The data collection and number of sub-frames fired off was really alot. Zongyang also remarked that this is the first time ever he experienced such a good sky for the longest duration in all his mersing trips.

Anyway to close it off , here are some Milky way wide field shots, enjoy! DCN_0169 by Zhung Wei Poon, on Flickr
Zodiacal light seen at 0530am Sunday pre dawn , verified by Gavin and Derrick, thanks for your help and expertise!

Anyway I wish to thank Remus once again for organising , and all the people that have made it a fun and rewarding experience, until my next report in 2018...cheers! 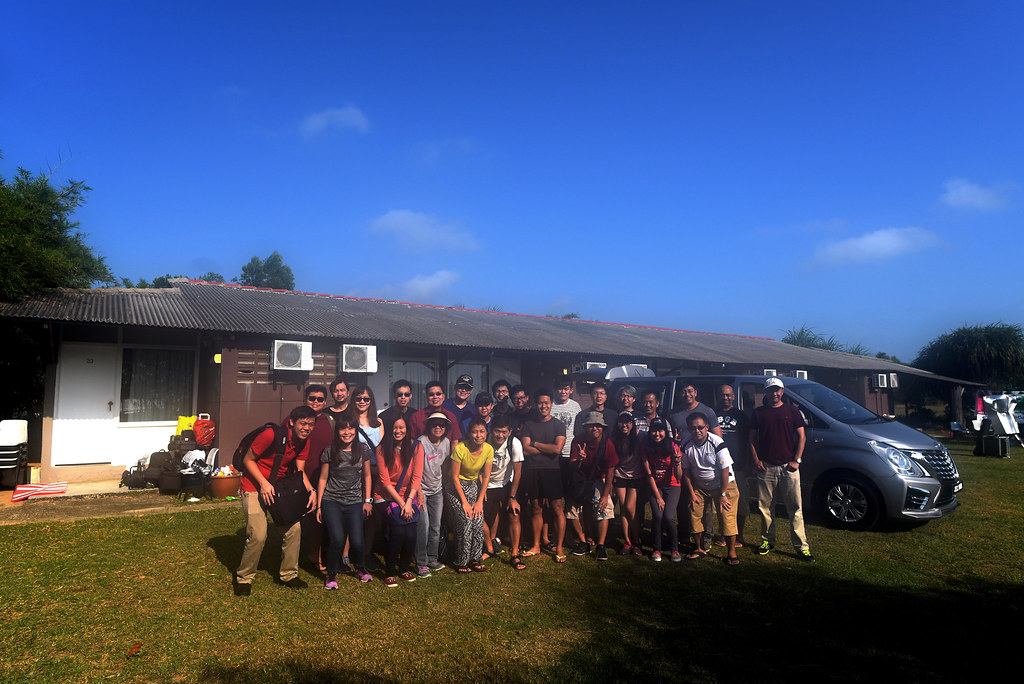 Nice write-up, Junwei! Was quite amazed to see Cat's Paw and Prawn visually for the first time too. A testament to the sky condition on that rare night.
Just a casual stargazer
Top

Nice and long report! Have not had one of these for a very long time.
Thanks for sharing Junwei! You caught a comet too....very productive night from the long list of objects!

Thanks for the long write up JunWei!

Definitely my most productive night at Mersing, and thanks for sharing the fantastic views through your massive 12" Dobsonian. The Swan Nebula is unforgettable through your scope!
Top

thanks for the kind words all!

It's been so long since zodiacal light was seen/shot at mersing , really quite rare , hence must note down.

regards
Junwei
I miss the place where stars shine bright, to gaze upwards in awe of the sight
Top
Post Reply
5 posts • Page 1 of 1