Alright, this is for sharing of your observation experience. Or, if you are arranging gatherings, star-gazing expeditions or just want some company to go observing together, you can shout it out here.
Post Reply
63 posts

3Dec - Red light from Active Region 2790. About 2-3 times the size of Earth. It started with a big bang on 29 Nov but has quietened down. 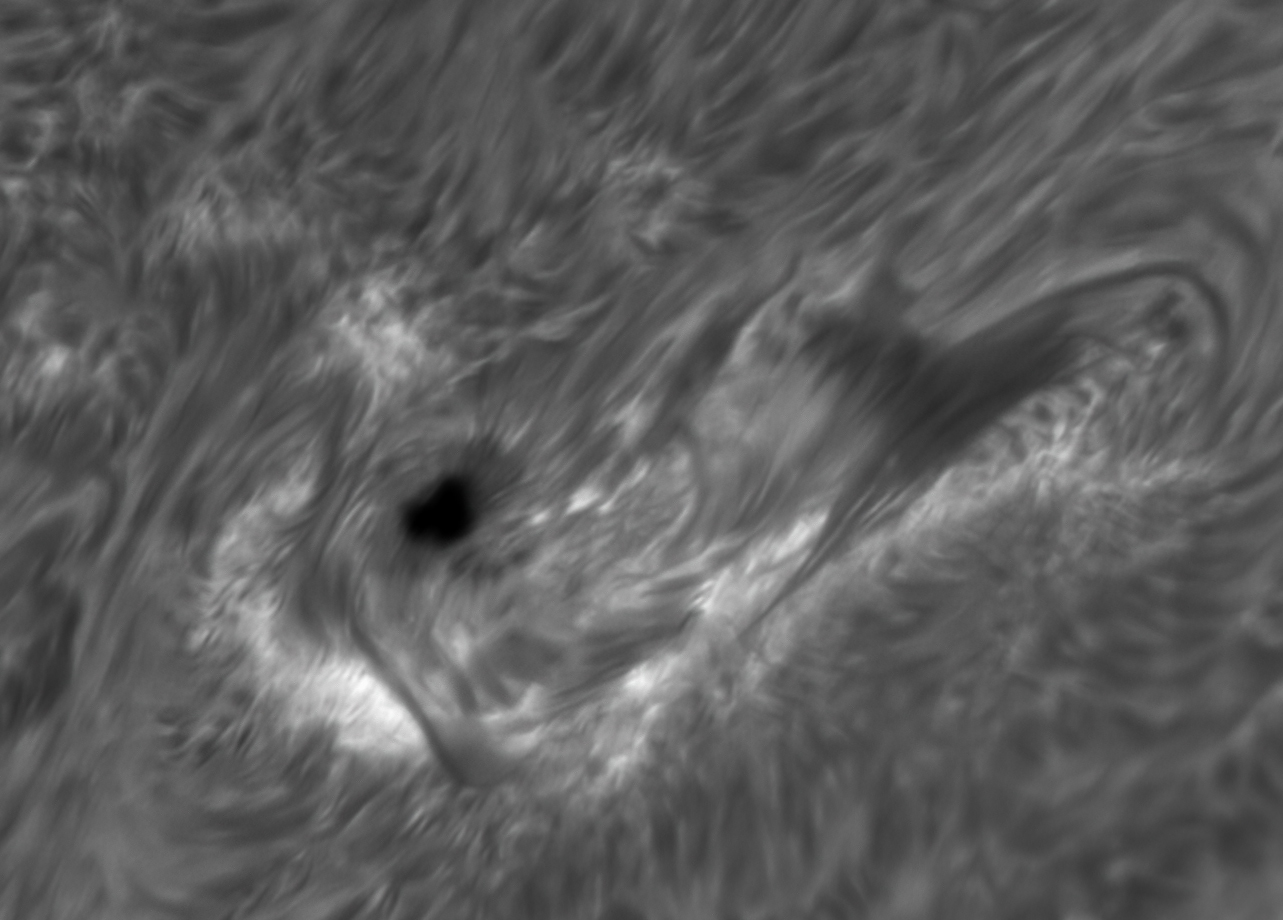 Hi All solar observer
Thanks Alfred for the photo., especially the cak ones., it really has a story to tell.... Today that sunspot core umbra grow a tail then today break up into 3 dark core separated by a seemingly light bridge. That's what 2 days of obs at 540nm yield... Really dynamic and full of activities. Not only that, 2790 actually grow from a single spot on 2 dec to a 2 spotted sunspot., the second spot is small and is following the initially larger spot
...... To be continue....
http://www.chia-astroblog.blogspot.com
Top

In Ha double stack.....
Yesterday, the ususal glow persisted but today at 10am,strong glow were detected in both 2786 and 2790.
Maybe a flare or a sudden burst of activities. Shortly it went back to the normal glow. Thus, im short 4 white glow region..... 3 in the southern belt namely 2786 region, 2790 region and a region between 2786 and 2790.
...... One region in the northern belt nera the middle of the belt.
Note that 2786 is approaching the edge of the sun now and some small prominences show up. Also on the 2790 side, a larger prominence show up at the edge and in cak, it clearly indicates that a NEW ACTIVE REGION WILL BE ROTATED INTO VIEW SOON. Really active southern belt.
In Cak...... The 4 region mentioned above also give a corresponding glow in cak with the sunspot showing up also.
http://www.chia-astroblog.blogspot.com
Top

Another addition from 3 Dec imaging session this morning, a close-up photo of active region 2786 in hydrogen-alpha wavelength: 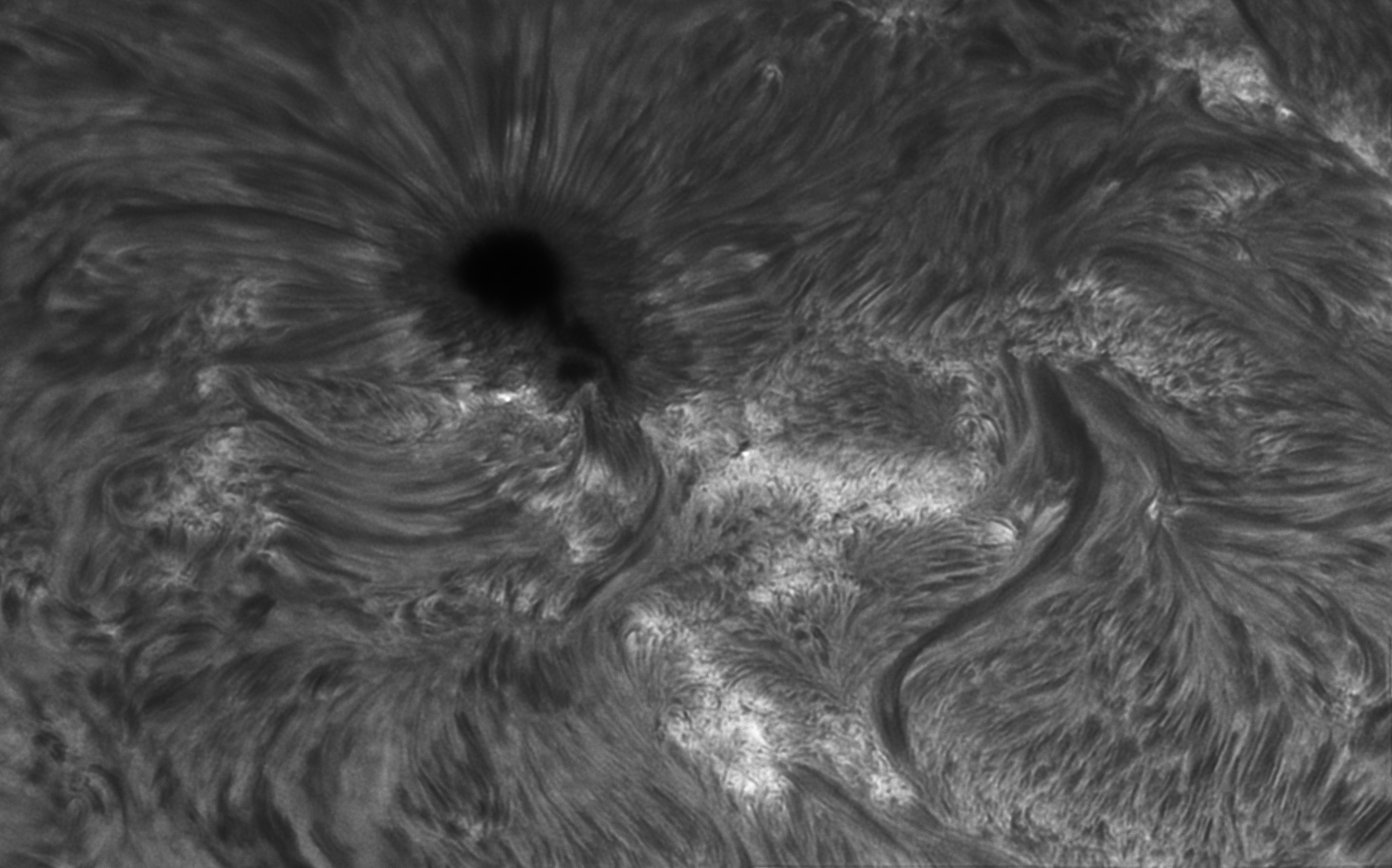 I received the following comments from Rigel at Cloudynights:

Beautiful! I could be totally off base but I believe the depth feeling comes from the fact that you are seeing some of the photosphere showing through below the chromosphere. I know everyone feels a double stack gives better contrast but I have always loved the feel of SS images on surface features that allows you to actually see the chromosphere floating above the photosphere. So you really are looking at different levels of the suns atmosphere and that is where some of that depth comes from. Also, this type of resolution bringing these features so close shows the subtle differences in height between the filaments, spicules, and other features of the chromosphere.

Today get a short gap at around 4pm so, get a ha double stack view of the sun., however no pic taken.
ACTIVITIES on the southern belt weakened., all brightening of active regions decrease in intensity and no tall prominence at all.
Northern region active region not visible on my double stack.
http://www.chia-astroblog.blogspot.com
Top

Today,
In Cak..... Approx 3 bright regions visible with one spotted. Also only 1 region in the northern belt, area if which is diminishing.
In Ha...... All 3 regions accompanied by long filaments.
Astonished why so many filaments show up but no prominence at the edge of the sun.
http://www.chia-astroblog.blogspot.com
Top

Today,
In 540nm..... Only 2790 show up as a small dot umbra-penumbra round sunspot.
In Cak...... 2 bright region on the southern belt with 2790 spoted and brightened. A small bright region in the northern belt.
In double stacked Ha...... Similar view as cak without the northern active region. Small prominence at both ends of the belt.
According to spaceweather, the sunspot 2790 flared yesterday.
Not surprising as I observed that suddenly the southern belt gives lots of filaments indicating that the sun suddenly starts to '' boil'' yesterday . Interesting match.
http://www.chia-astroblog.blogspot.com
Top

Today
In cak..... 2 regions left on southern belt as one region going to the other side of the sun. The northern active region had disappeared leaving only 1 or 2 brighter dots.
However 2790 still show up as a bright region with a spot.
In Ha..... Same as cak with 2 bright regions in the southern belt and NO bright region in the north. However quite some filaments can be seen AROUND those 2 active regions and one short fat filament in the north. Looks like the sun boils again. Question is.... Will it flare again like previously..... Interesting to watch and see.
http://www.chia-astroblog.blogspot.com
Top

In short, today
In 540nm.....small umbra-penumbra sunspot coming to adge to be rotated to the other side of the sun.
In Cak...... 2790 region plus one nearby region visible., rotating out of view soon., the northern bright region had disappeared.
In Ha...... 2790 region and the nearby region that shine bright accompanied by filaments. Active region in northern belt had disappeared.
In summary, activities decreasing.
http://www.chia-astroblog.blogspot.com
Top 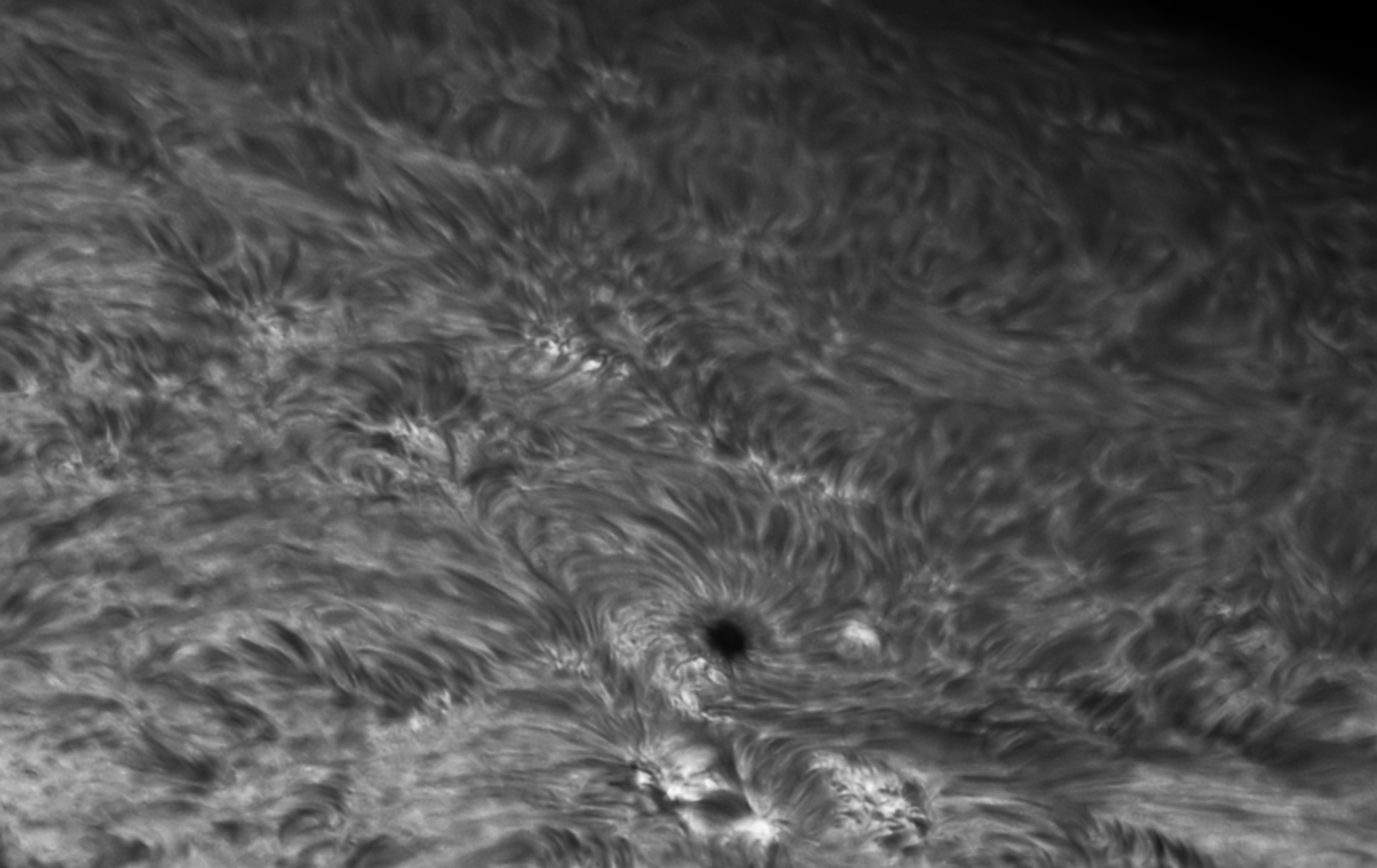 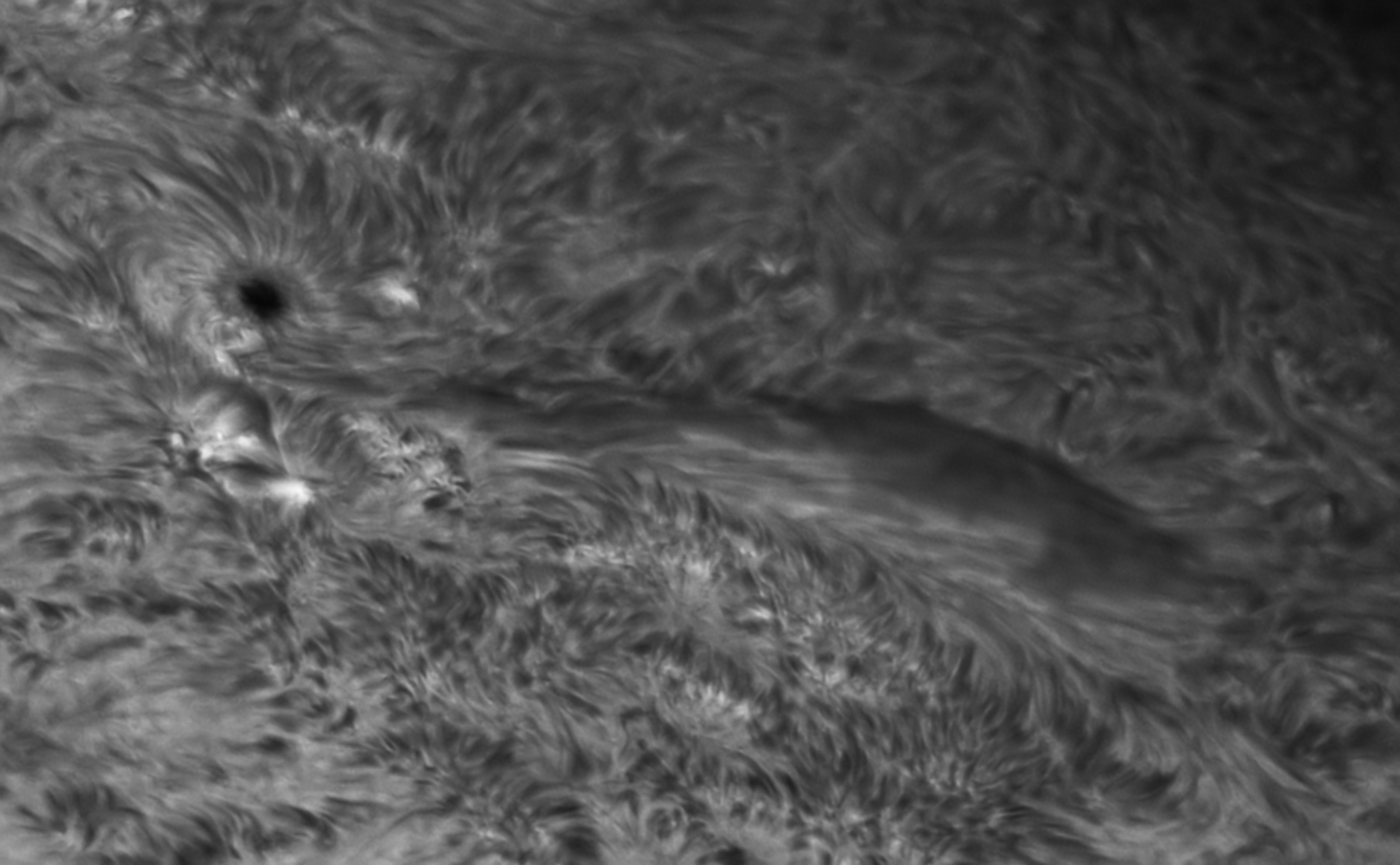 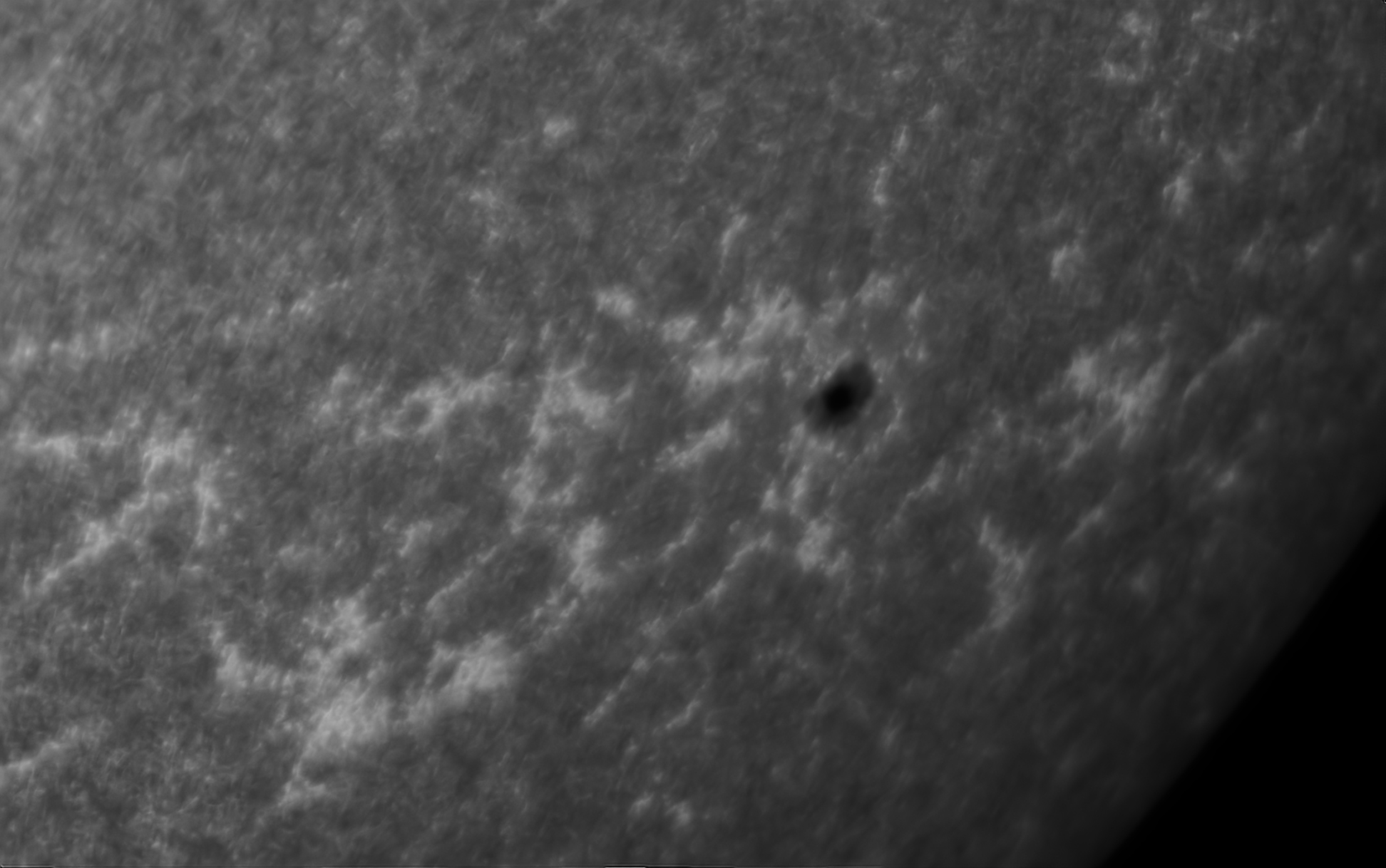 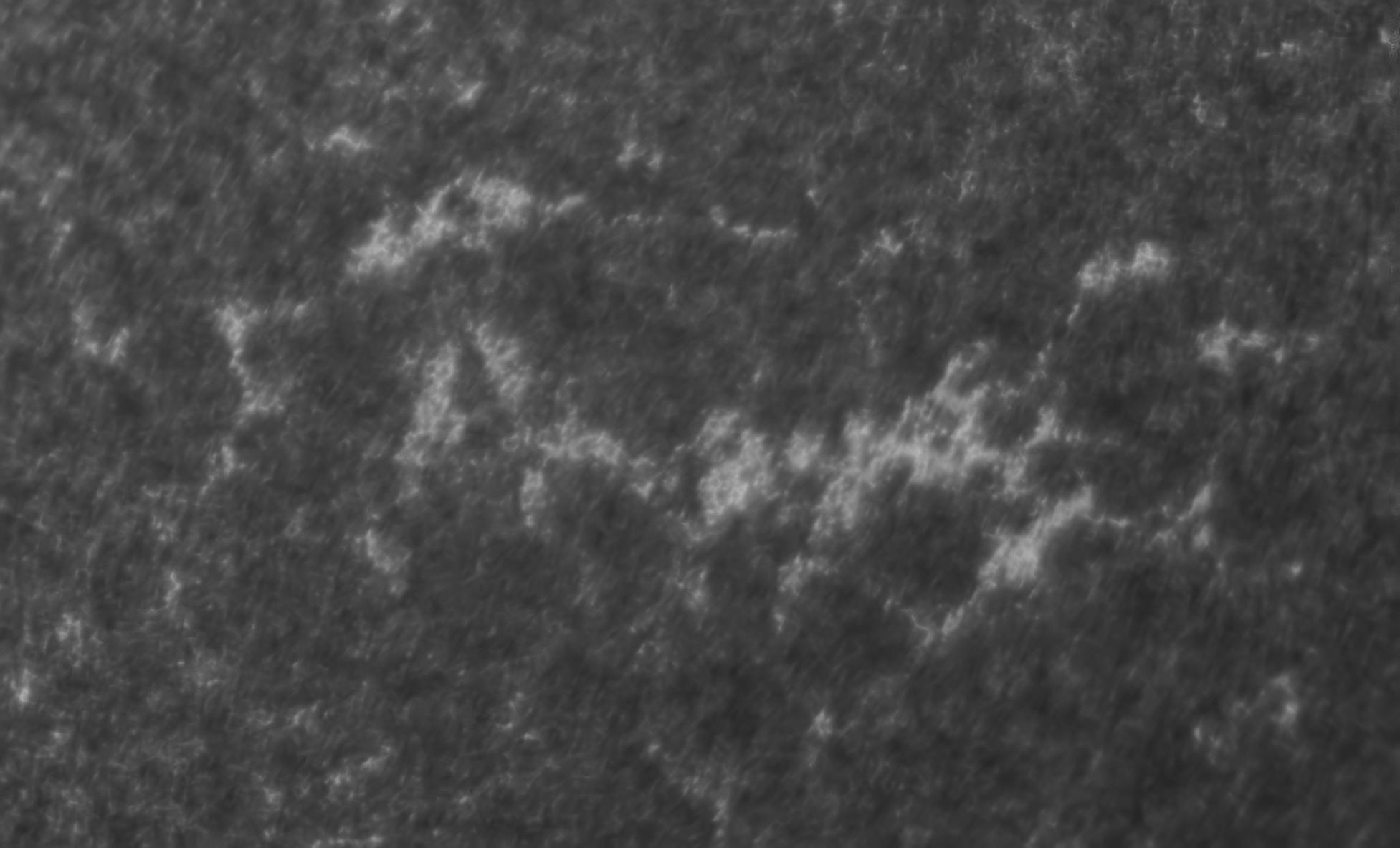 Looking forward to seeing the new active regions making its debut on 13 Dec 20.