CCD vs Film? Lots of time vs no patience? Alright, this is your place to discuss all the astrophotography what's and what's not. You can discuss about techniques, accessories, cameras, whatever....just make sure you also post some nice photos here too!
Post Reply
46 posts

hi Bros
I recently went to Death Valley National Park and took a photo of the MW. Unfortunately it was taken during the full moon and the MW didn't come out well. I tried editing it in PS but couldn't bring out the MW as much as I like to... It could be due to the pollution from the full moon or my less than adequate PS skills (likely)... Like to ask if anyone can help? I do like to know if it's the latter or former!

I will send the raw photo to u (via email) to try.

Hi
I went for a holiday and took some pictures while traveling in Bryce Canyon National Park and Glacier National Parks.

The Glacier National Park was a time-lapse taken at 3am but astronomical twilight started to brighten up the sky as early as 4am and I had to stop. The view there was simply breathtaking with calm and still waters in the night that bring out the reflection from the mountains. 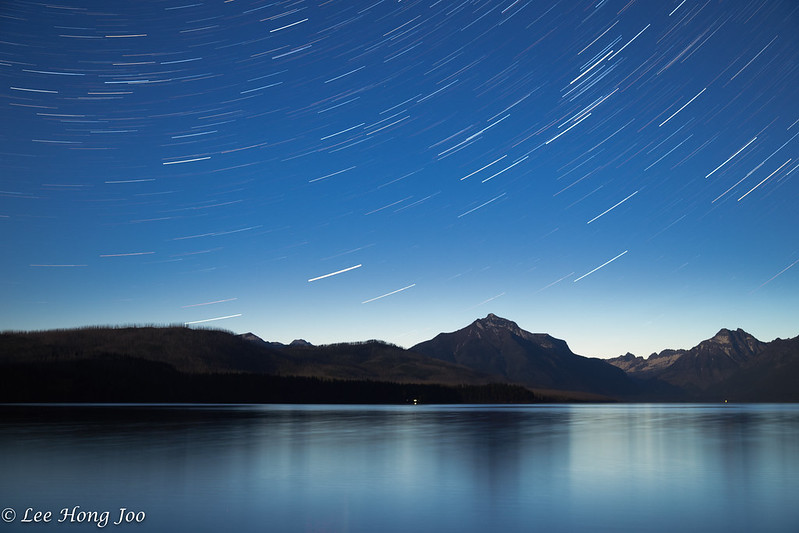 Here's another MW shot taken at Bryce Canyon National Park with the hoodoos as foreground. I'm learning to stitch several rows of panorama photo and will work on it in the next few days. 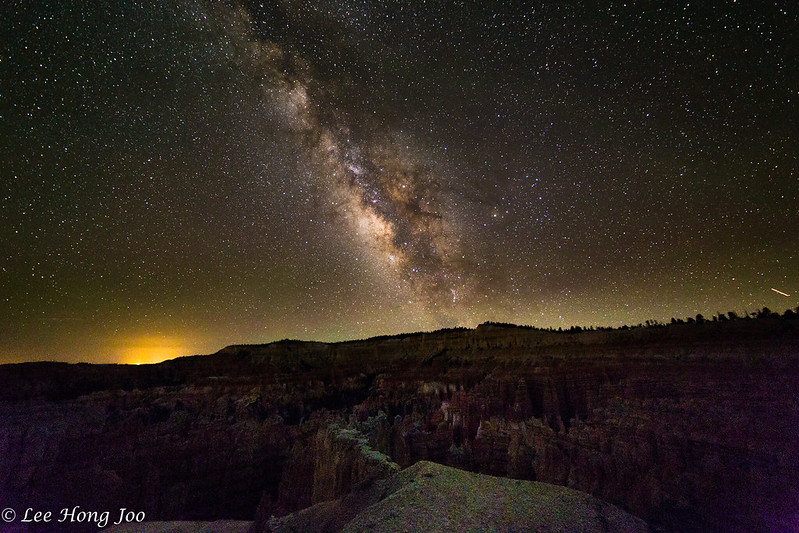 A panoramic photo of the Milkyway at Bryce Canyon. It was 1am and the area was really dark!

Five photos each were taken for the sky and canyon area. Shots taken at ISO3200, F4 with 3 mins exposure. There is some greenish look due to the airglow.
Still working on my stitching and photoshop skills... still have room for improvement 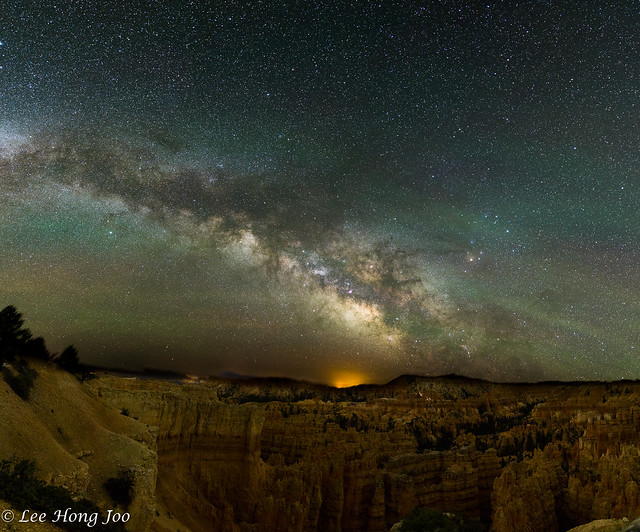 Went to Grand Canyon last week and took this photo immediately after astronomical sunset. The Milkyway core had already set at this point. I made a silly mistake of setting the aperture at f7.1 instead of the max permissible my lens could allow i.e. f4.0. Photo was taken with ISO 3200 at 24mm, 120 sec setting.
In hindsight, it turned out a good choice since the moon was still out and at f4.0, it would have masked out the milky way if it had been this setting...

A total of 12 photos with 3 rows were stitched to form this panoramic photo. Halfway through the process, a shooting star shot across and u could see that in the middle of the photo. Hope u guys enjoy it! 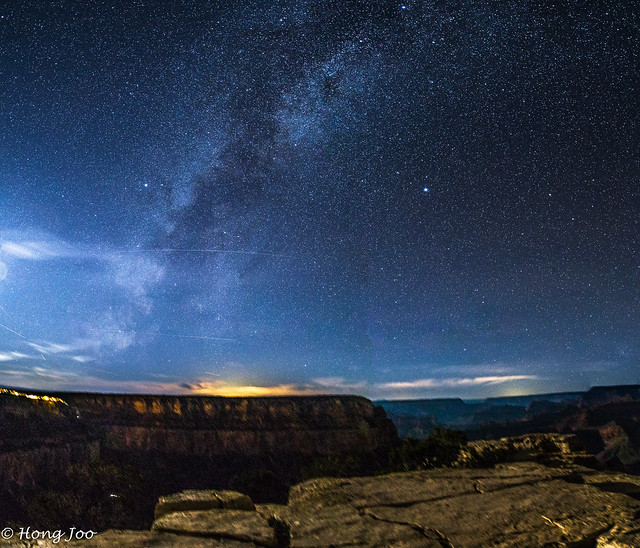 Here's another similar shot but taken with my Samyang 14mm lens.

Two shots were taken for this composure at 14mm f2.8. The sky was taken with ISO3200set at 50 secs. My StarAdventurer was running and I had to watch the timing as any exposure longer than that would have been ruined by the 'pollution' from the moon.
The foreground was set at ISO4000 and 120 sec as I wanted the Canyons to be visible; the StarAdventure was turned off for this shot. 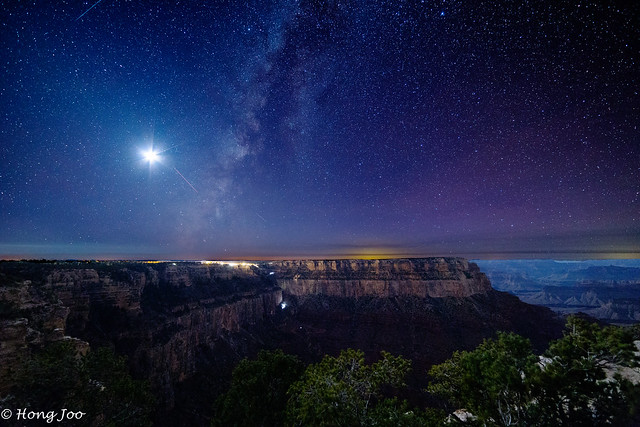 Setting Milkyway at Grand Canyon by heyjojos, on Flickr
Top

This is one of my first few tries using a torchlight to paint the foreground. I used my daughters as 'model'. Photo was taken in Sedona, Arizona. Shots taken at 14mm, f2.8, ISO3200, 70 sec. 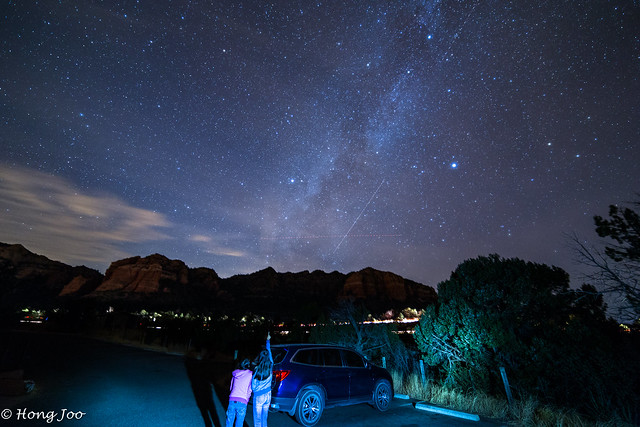 Girls at Milkyway Party by heyjojos, on Flickr
Top

A lone tree under the stars... 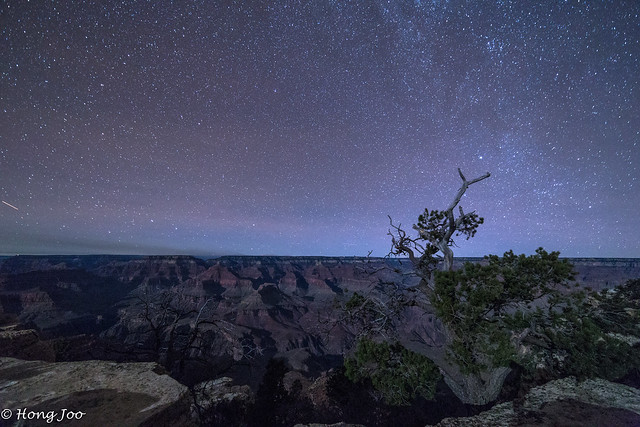 Lone Tree Under the Stars by heyjojos, on Flickr
Top

Hello
This was taken using a new lens that I bought - Samyang 24mm f1.4. Foreground and sky photo was combined using Photoshop. It was really a cloudy night and had been raining for the 2 days we were there. The sky finally cleared for a while and this was the few shots I could take that was decent to say the least. My plans to take the core of Milkyway just didn't turn out as desired. Guess that's the bad with this hobby - you are at the mercy of mother nature. The sky was dark though and I could even take then Andromeda Galaxy with my 14mm lens! 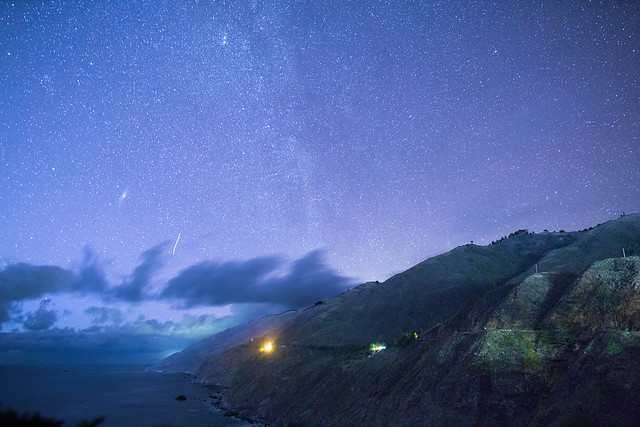 Here's a Milkyway taken at Mesa Verde National Park, Colorado. The National Park is well know for the Puebloans who live beneath the overhanging cliffs back in 1100s (that's 900 year ago!)

I just can't help but to imagine what they see when they look up the skies with no light pollution.
Single row of 4 shots taken. ISO 3200 and 30s. 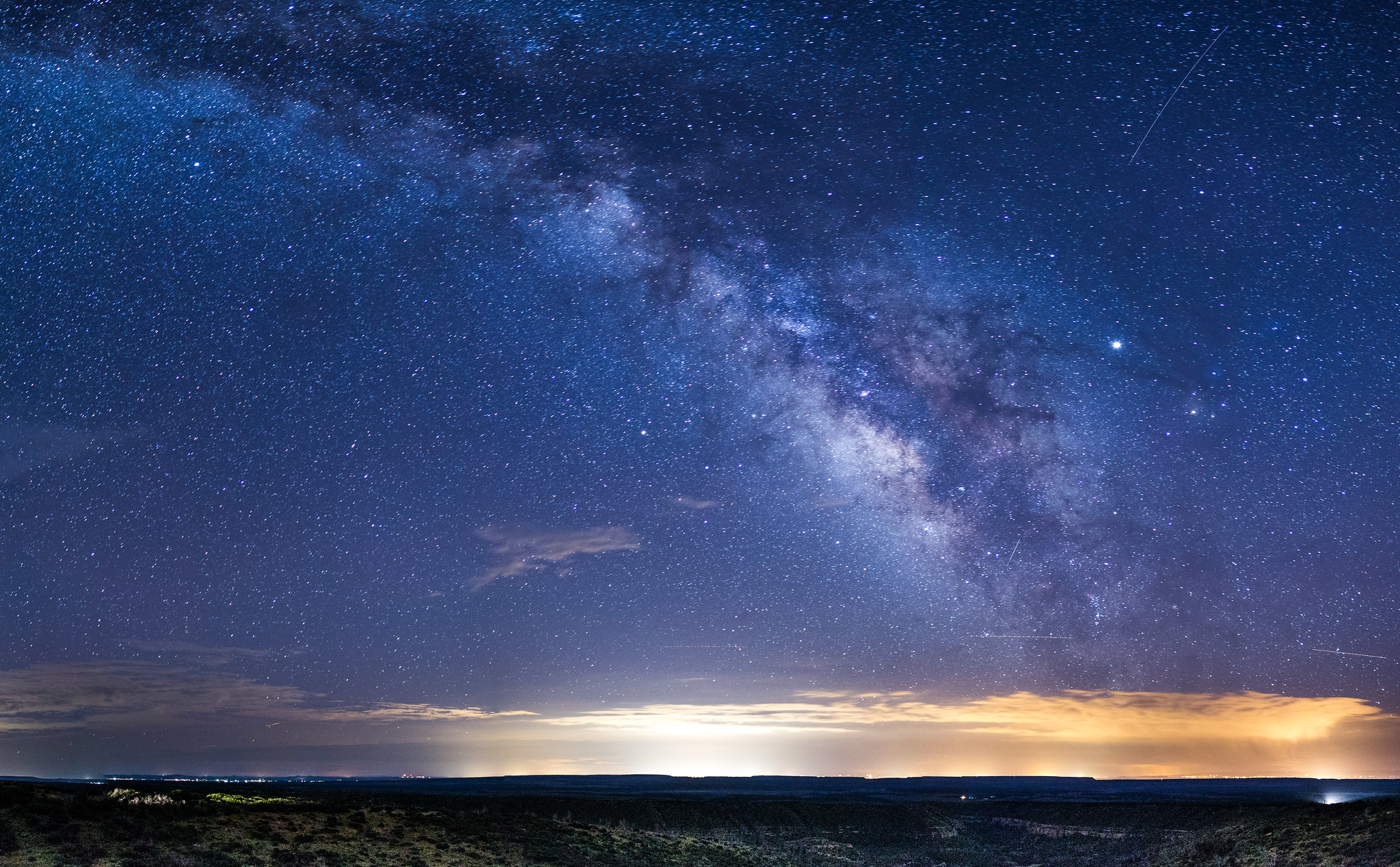