CCD vs Film? Lots of time vs no patience? Alright, this is your place to discuss all the astrophotography what's and what's not. You can discuss about techniques, accessories, cameras, whatever....just make sure you also post some nice photos here too!
Post Reply
380 posts

A lovely evening spent under the stars at Kranji. It is slightly less light-polluted, and I can easily make out those not-so-dim constellations. It was quite a joy visually, but a challenge in photographing -- at least in the first two hours after sunset -- the persistent pass-by clouds kept blurring the view of the milky way.

Nonetheless, I managed to shoot Venus and Milky Way in the same landscape photo. And notice the glittering reflection of Venus! 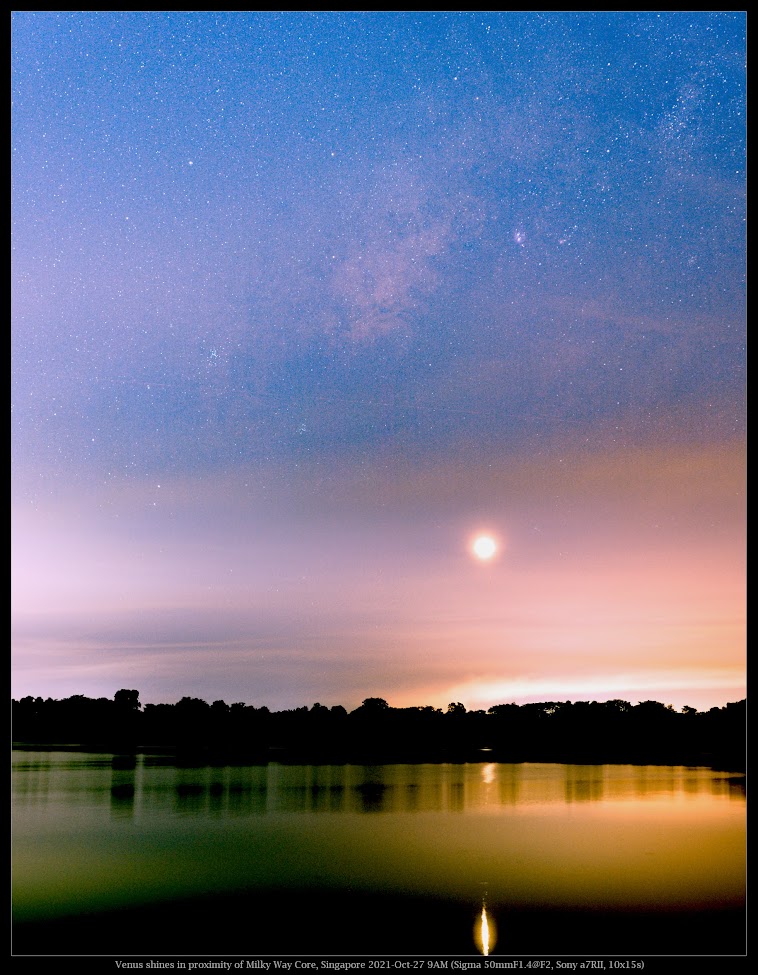 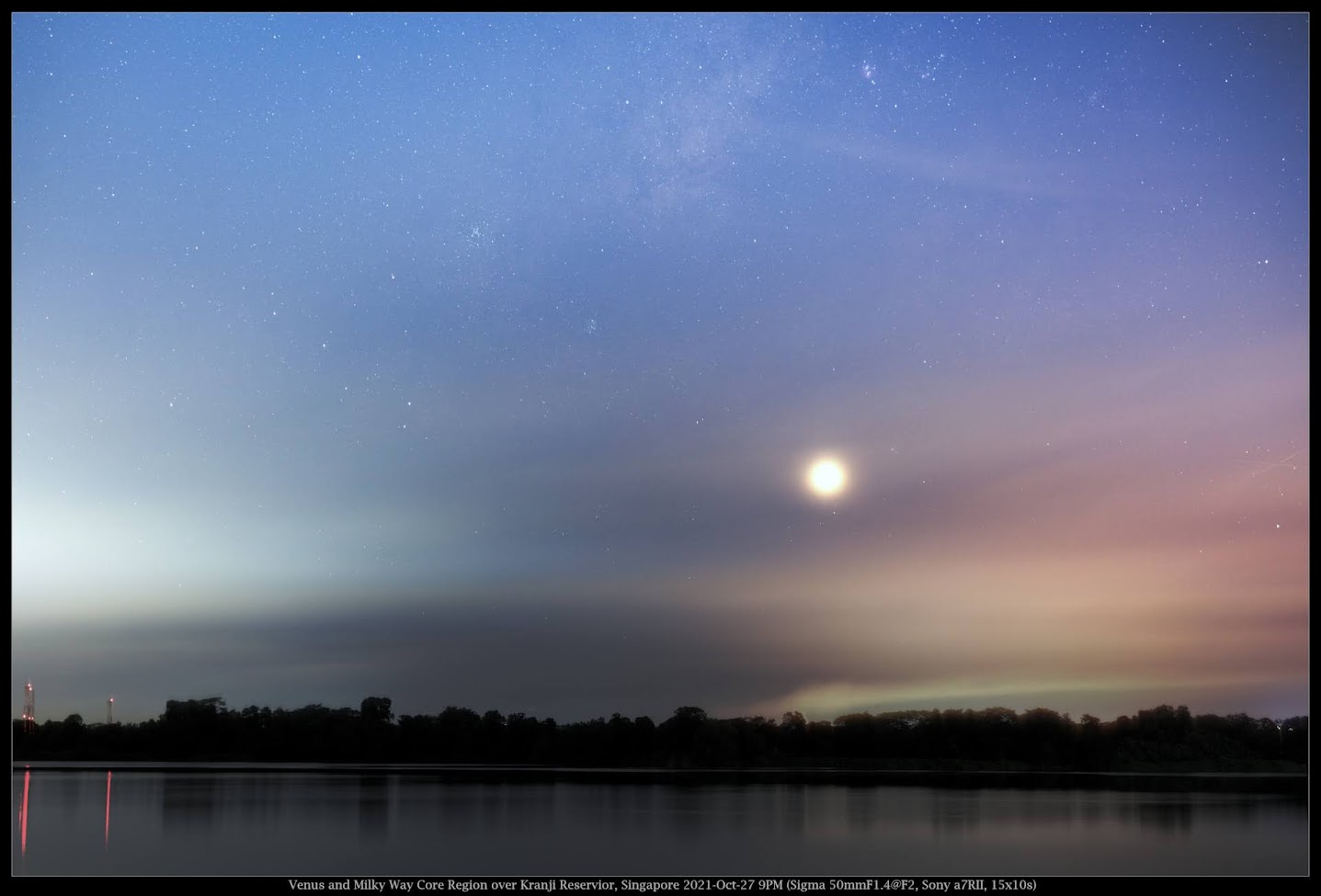 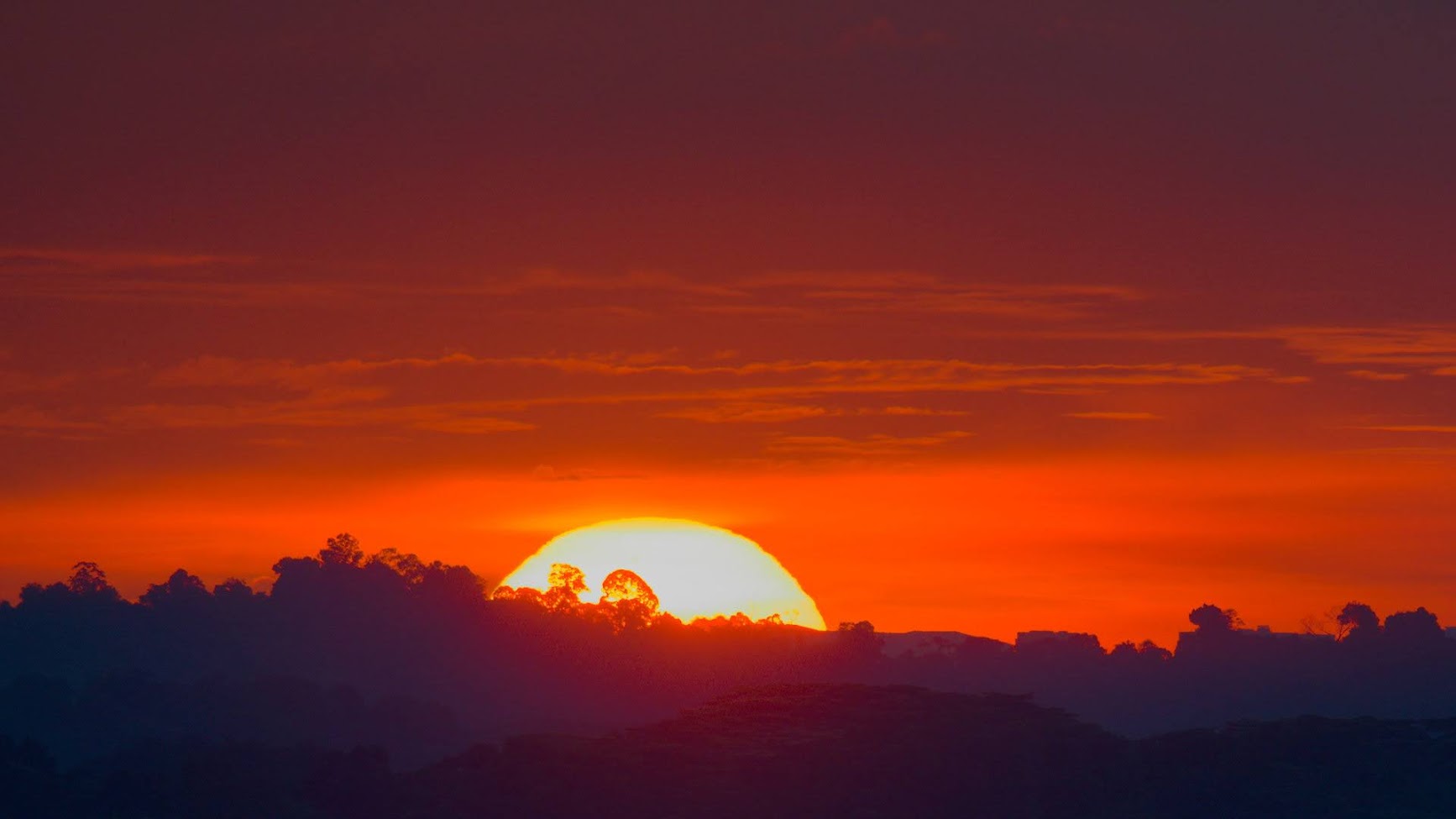 The primary target was Venus -- almost at the spot of the milky way core. 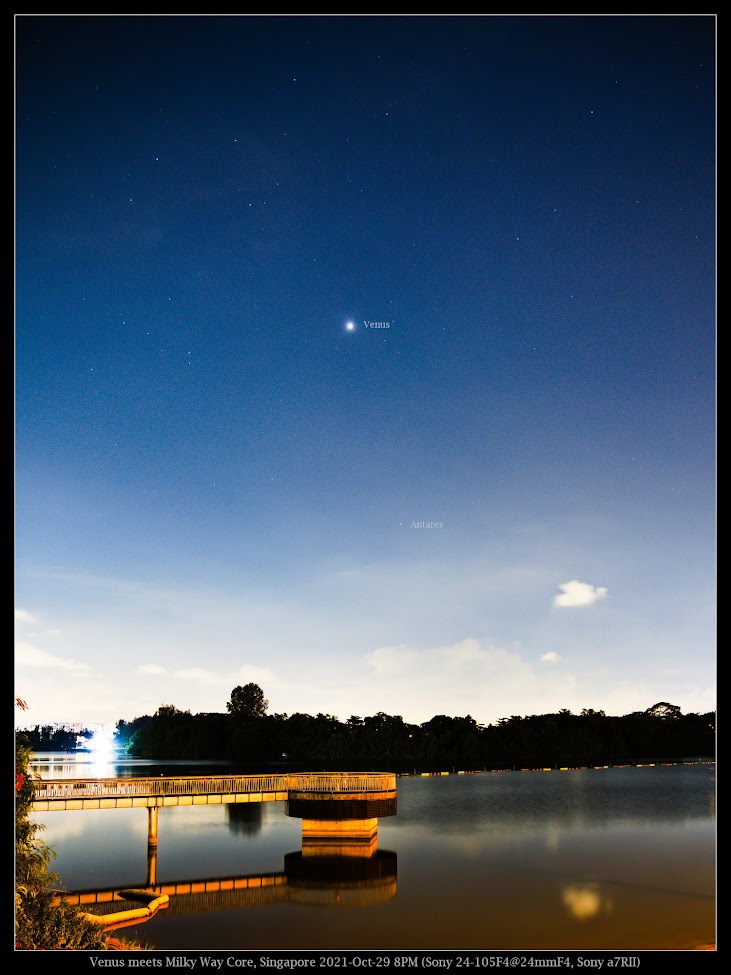 So happy that I finally captured the image of blazing Venus in this super-rich field of interesting objects. Note on Nov 1: I just checked Venus Ephemeris info on JPL Horizons System. Turns out this is probably the most favourable moment (Venus on the eastern elongation at 47deg from sun, and in the MK core region) for many years. The next similarly favourable moment will have to wait until 2027. Wow!

And then the above picture was taken almost at the exact moment of this eastern elongation (within 1~2 hour)!
Last edited by hhzhang on Mon Nov 01, 2021 3:53 pm, edited 2 times in total.
Top

Early morning saw super clear skies. The moon has entered the waning crescent phase, and to my surprise, shows the beautiful earthshine clearly. This year after having tracked the moon closely over months, I have developed a better sense of how the same-phase moon visits different constellations in different seasons.

It is much like tracking the position of the sunset/sunrise, or that of the seasonal constellations. While Singapore does not have four seasons, the observation of the night skies connects me to the celestial seasons. What a delight! 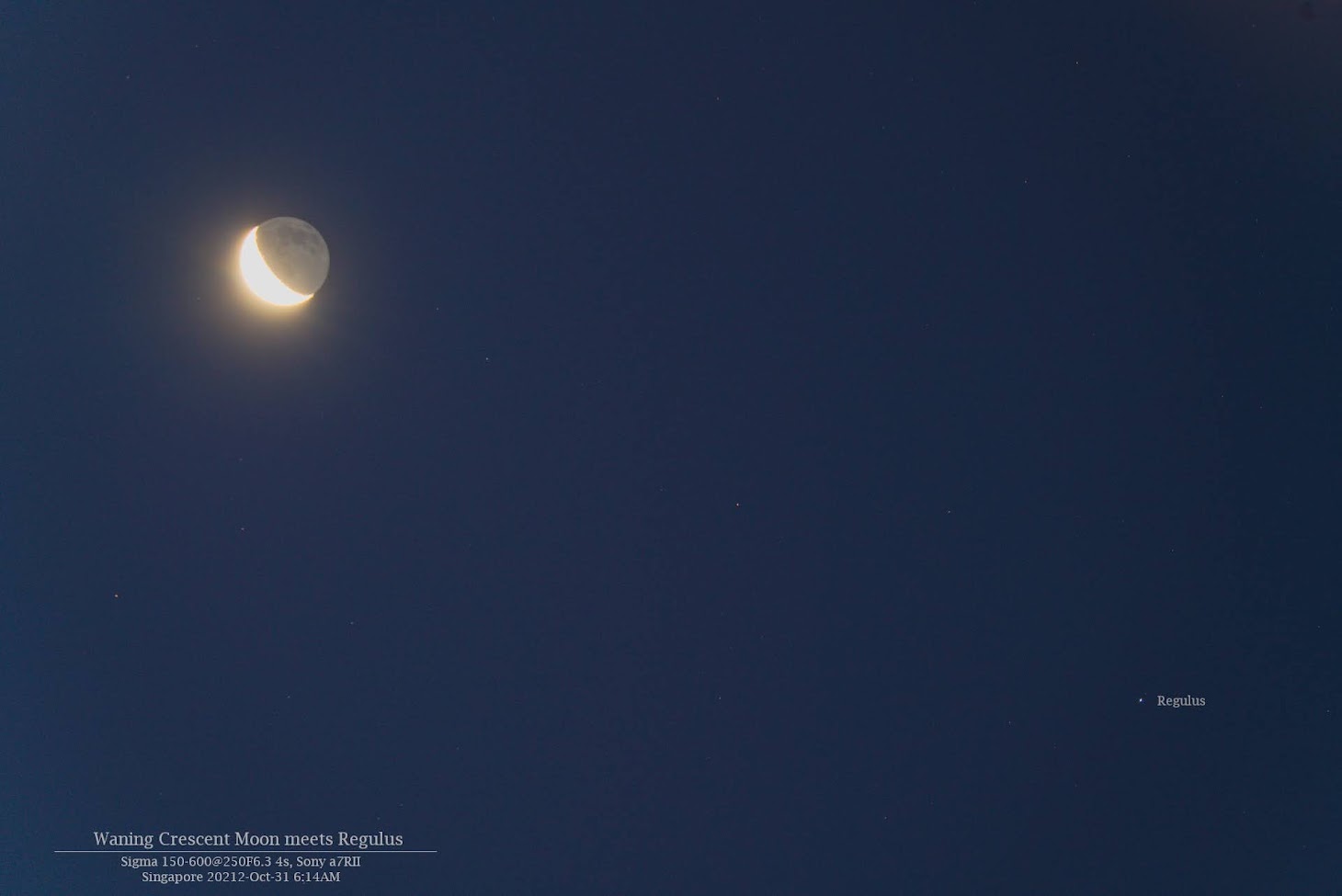 It feels like ages before I managed to take another astrophoto since the above post. Oh the weather!

This particular evening -- thankfully there was a gap in the clouds. It allowed me to capture a few shots of the crescent moon near Antares. 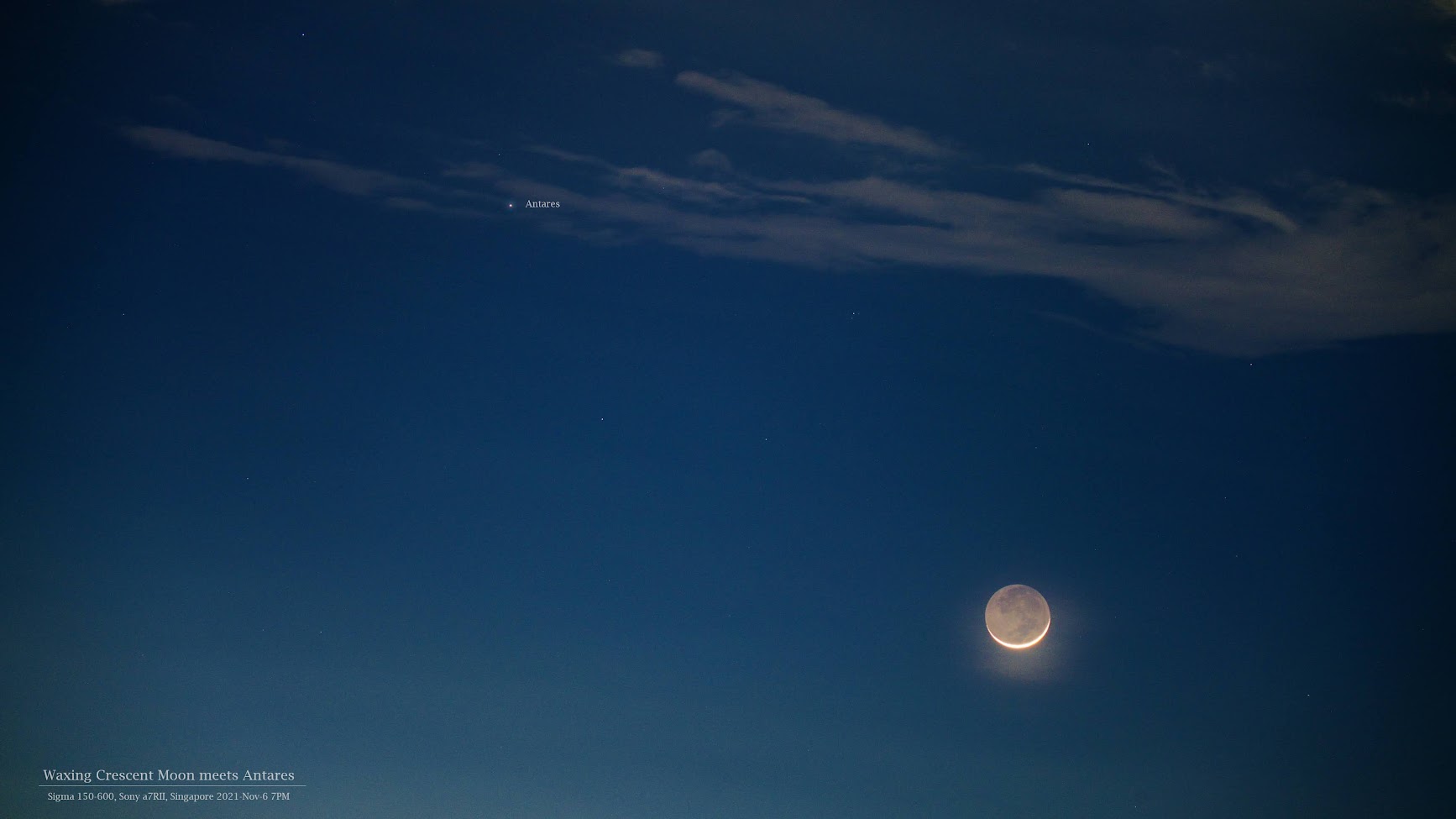 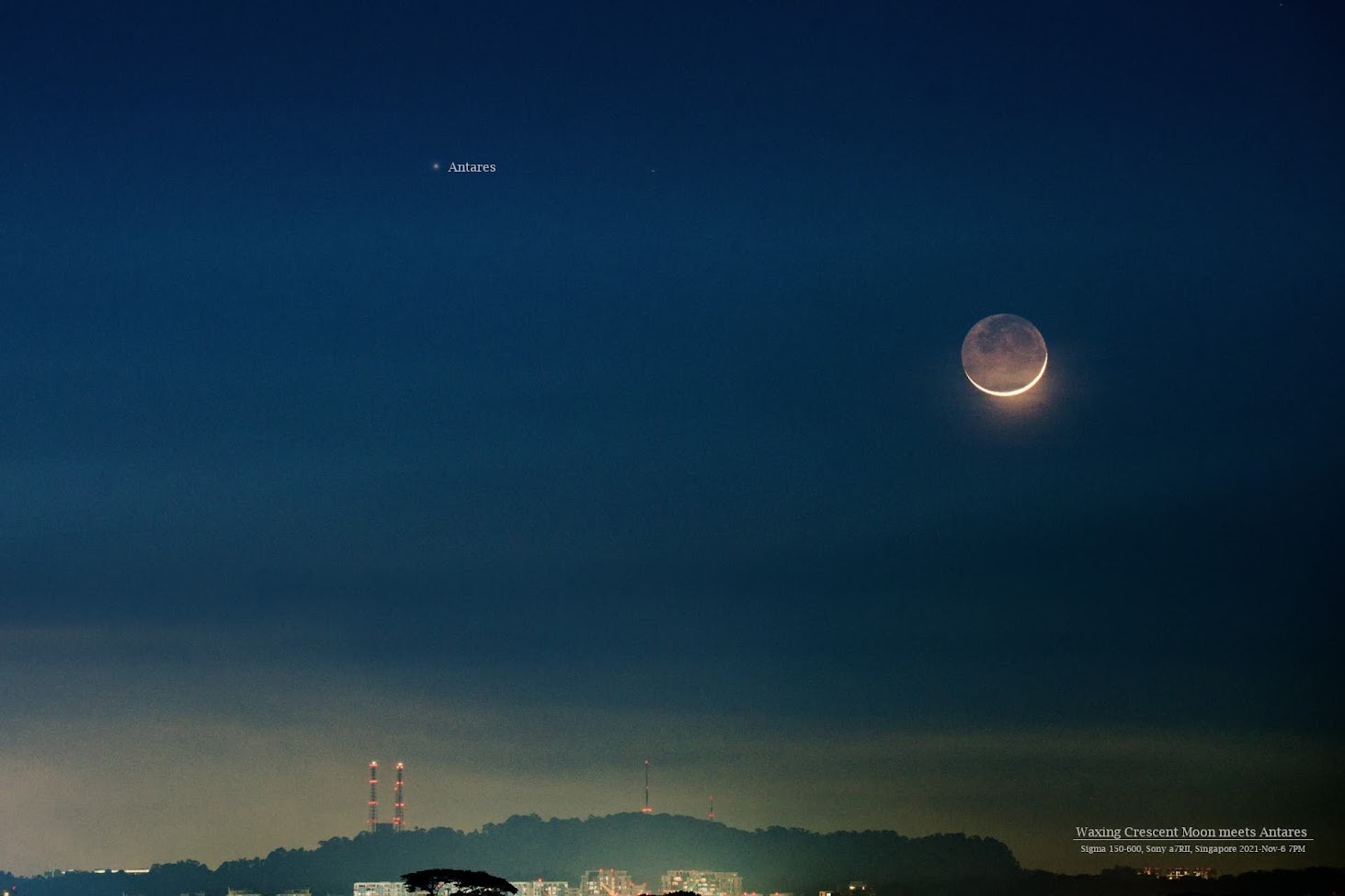 After 10-11PM, I noticed the clouds were dispersing and I decided to shoot some solar system objects. The idea was to use a very small APO refractor and a small (1in) astro-camera to track their celestial motions in a time frame of 1 hour or 2.

The telescope is 70mmF6+.79x, giving a FL at 330mm. The camera is ASI183MM Pro -- high quantum efficiency but quite a small size (small FOV). The pixel size is ~1.6arcsec/pixel. The challenges include a) getting 1-min subs on SkyGuider Pro with minimal trailing -- using an autoguider. b) manual GOTO to frame the target object in the tiny FOV (I resorted to iterations of RA and DEC adjustments) -- compared to Sky adventurer, the skyguider pro lacks in fine adjustment on both RA and DEC.

I slightly modified the system so that the autoguider sits at the end of the weight-balance bar (rod), which saves some dead weight to ease the load.

ASIAir Pro was the astro-computer. A quick procedure of rough polar alignment + drift alignment brought me a nearly flat DEC drift line. However, I had some trouble with the RA autoguiding. But I am not very sure about the result -- the autoguiding seems problematic.

Anyway, back on my computer, after removing a large portion of slightly trailing shots, I am quite impressed with the capacity of this configuration. With several minutes worth of exposures (from my HDB estate in Punggol), it could detect objects as dim as mag16 or even mag17.x. I guess it was helped by my decision to remove any filter from the optical path -- so the camera sensor receives all the photons --- and those dim objects are probably shining more in the near-infrared spectrum -- in which the light pollution is much weaker while the camera's QE drops but not as much.

Firstly, I liked to capture small but far-away object -- here is a large Jupiter trojan (588) Achilles. Note this picture is in the original pixel scale. 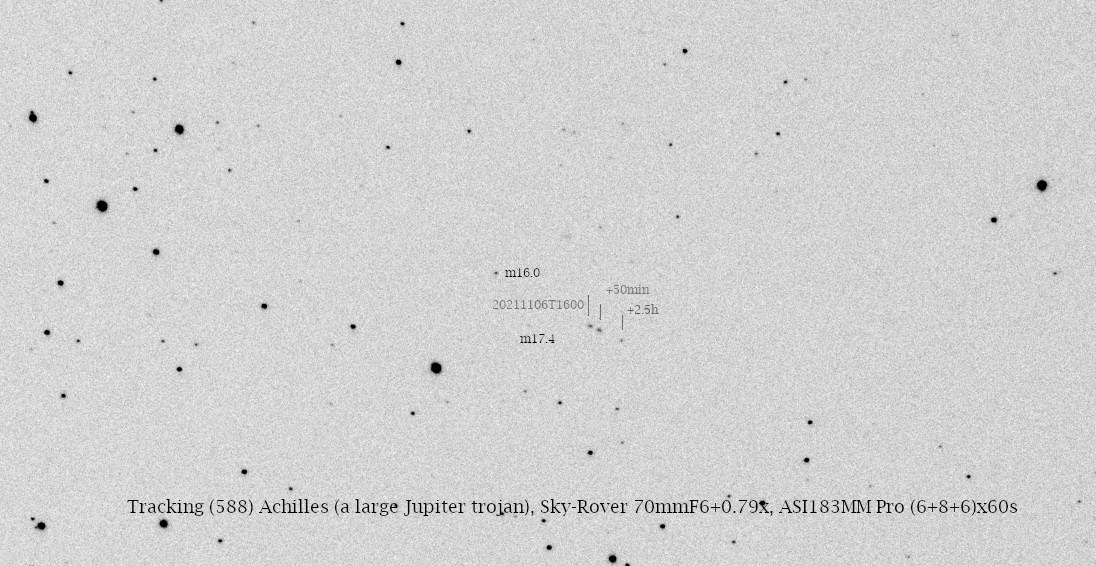 Another target is a main-belt asteroid. But it bears the name of my home province in China. 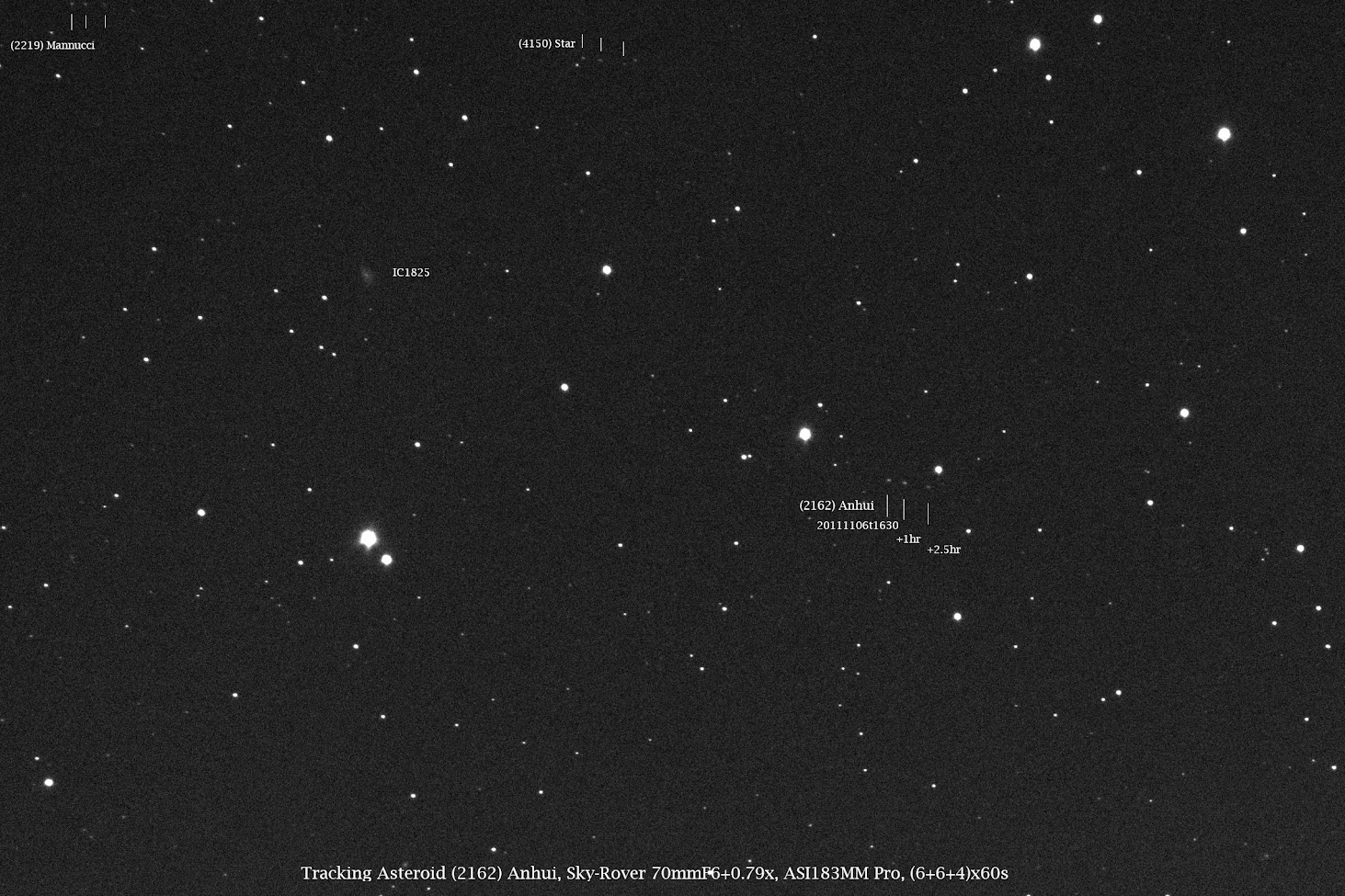 I didn't forget Uranus which is not far from those small targets. And I was curious if the system could detect the satellites of Uranus.

Turns out yes, it can -- but the satellites could not be too close to the giant, bright planet. 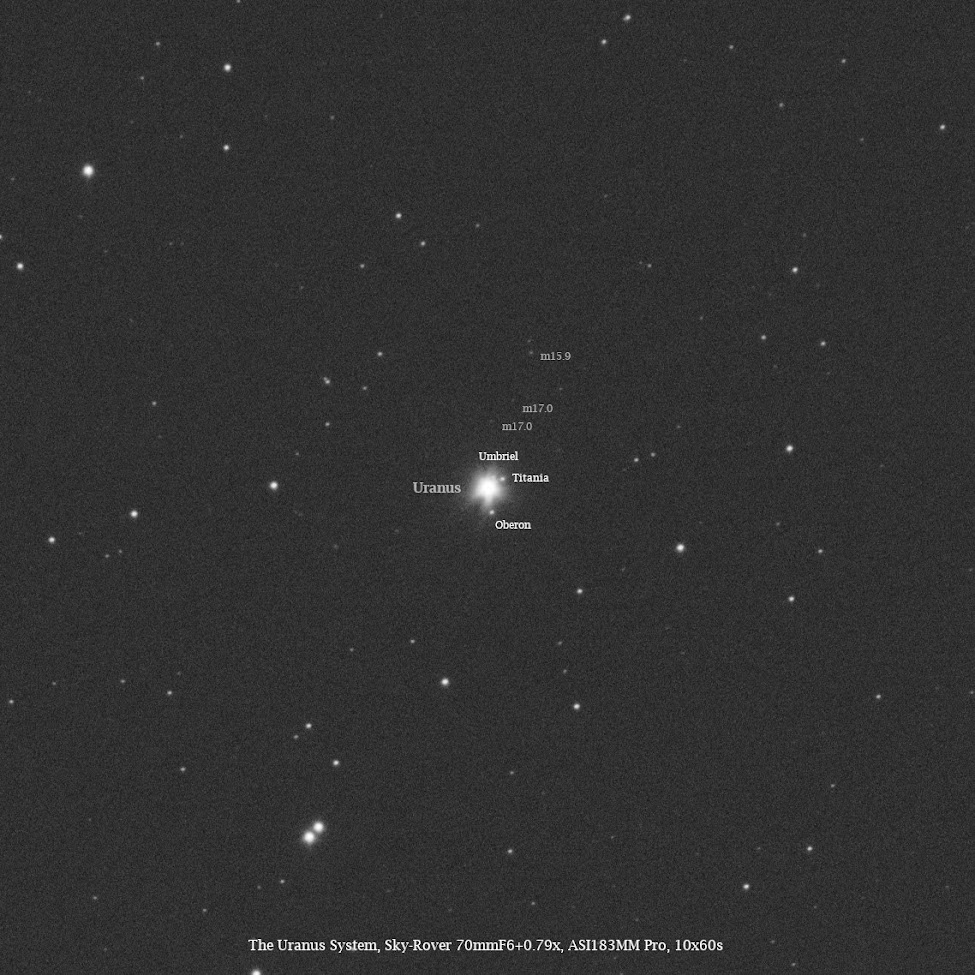 And I also didn't forget Ceres, asteroid no.1. It is transiting the Haydes field these days. 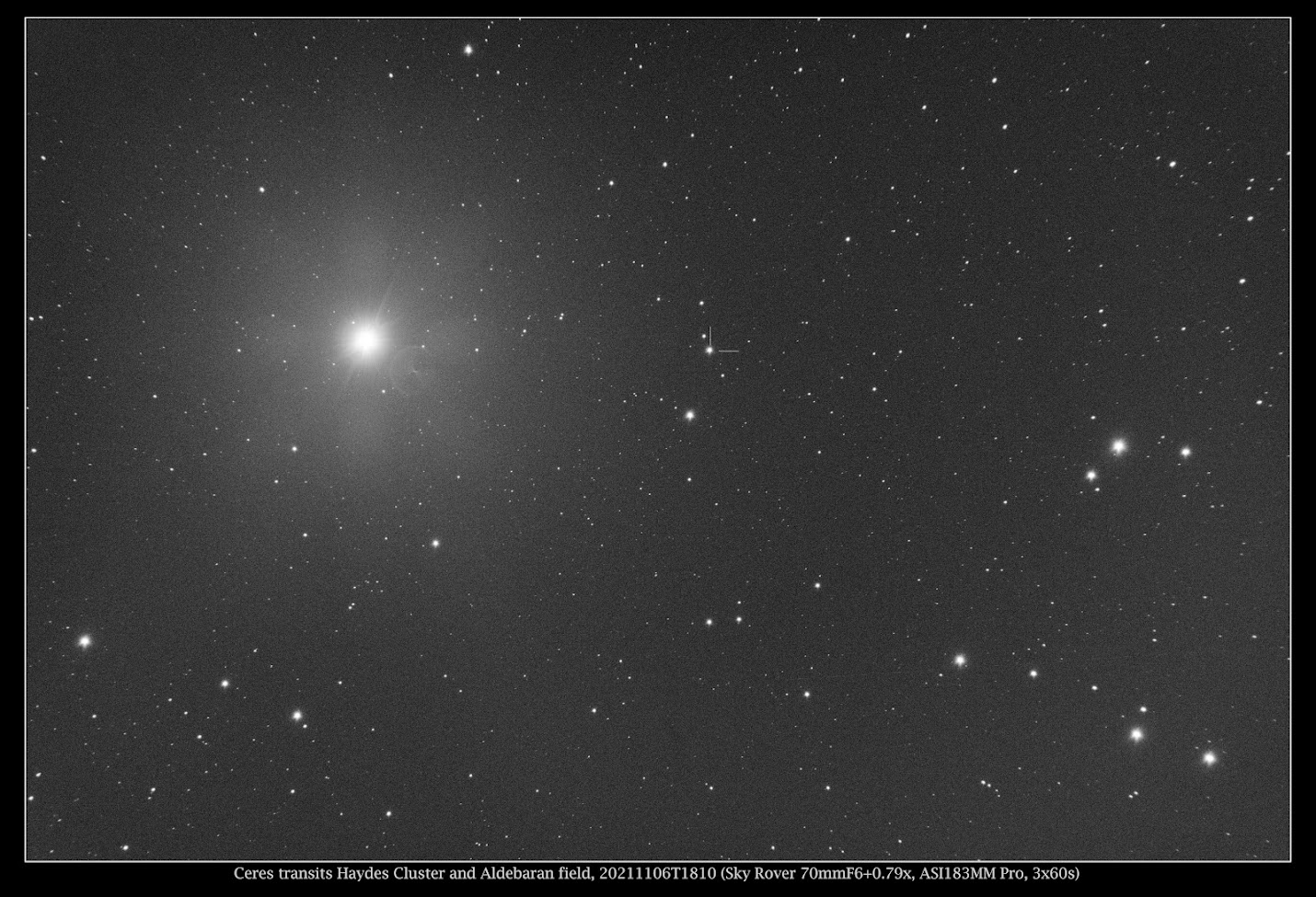 I simply enjoy viewing such photos where an iconic star really shines.

At mag 7.7, Ceres is quite bright and an easy catch. But I failed to capture its motion this morning, before I could shoot another photo to pick up the motion, the whole sky was shrouded entirely by the clouds.
Top

Its Wikipedia page reads "1911 Schubart, provisional designation 1973 UD, is a dark Hildian asteroid and parent body of the Schubart family, located in the outermost region of the asteroid belt, approximately 70 kilometers in diameter. It was discovered on 25 October 1973, by Swiss astronomer Paul Wild at Zimmerwald Observatory, near Bern, Switzerland. The asteroid was named after German astronomer Joachim Schubart."

"With an diameter of 65–80 kilometers, it is one of the largest members of the Hilda group of asteroids, which are in 3:2 orbital resonance with the gas-giant Jupiter."

So it is more distant than most asteroids. 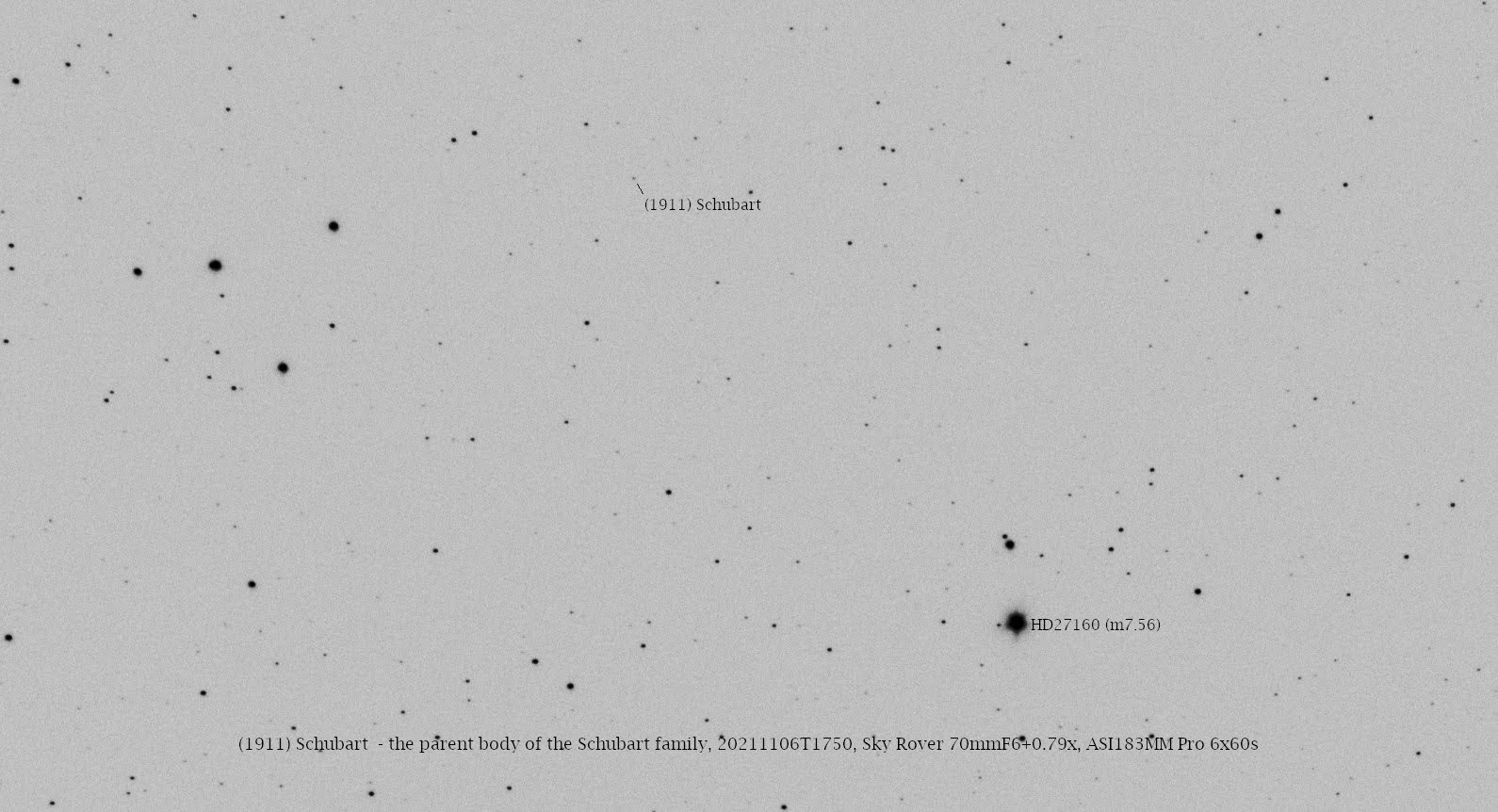