CCD vs Film? Lots of time vs no patience? Alright, this is your place to discuss all the astrophotography what's and what's not. You can discuss about techniques, accessories, cameras, whatever....just make sure you also post some nice photos here too!
Post Reply
340 posts

Back to deep skies. But a rough journey spending most of the time fighting all sorts of problems/errors.

This early morning (Oct-8) the Orion was shining overhead near Zenith. I set up my star adventerer tracker and autoguider -- only to find out that it did not autoguide. I had to pull out my iOptron SmartEQ, drift align and .... my imaging lens+camera fell from height -- after a while I resembed everything and started collection exposures -- but it started to become a bit cloudy after half-an-hour or so.

So here is the Orion nebuli from 25x60s R filter. 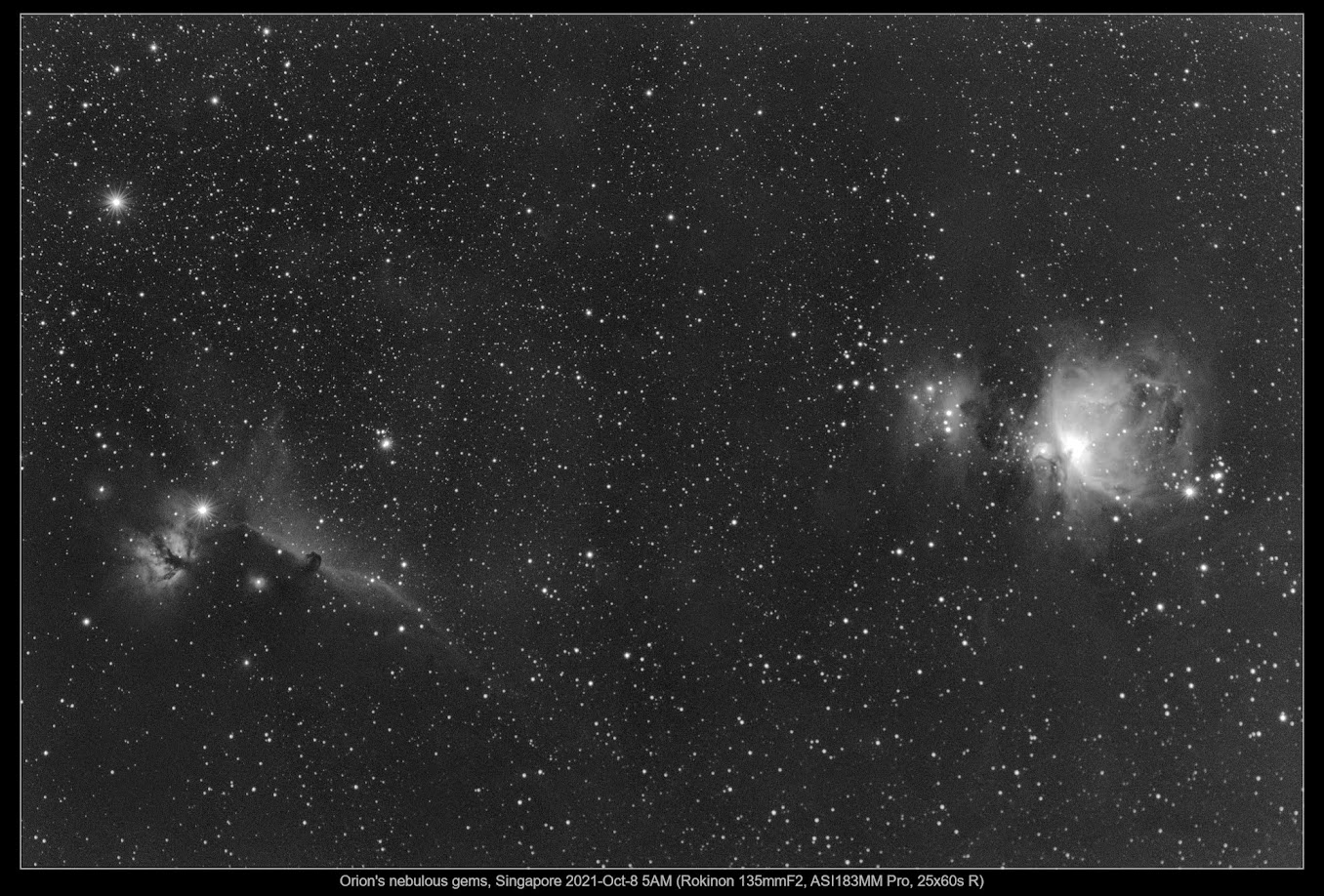 It is really an interesting season that you can still shoot summer milkyway objects in the evening and then shoot winter objects before dawn time.

But the imaging session on Oct-7 evening was very rough -- and the never clearing high clouds just added to all the technical problems. I came back with few exposures that include 2x90s M8-M20 region. First time shooting the pair using an astrocam. 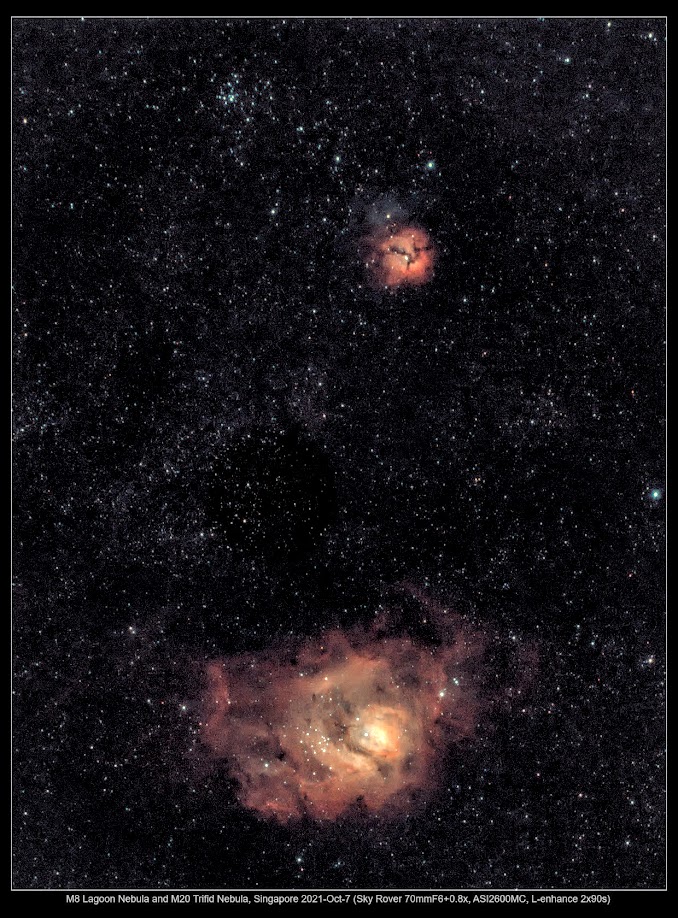 A bit disappointed. I went on to use a remote telescope service to shoot this region again. 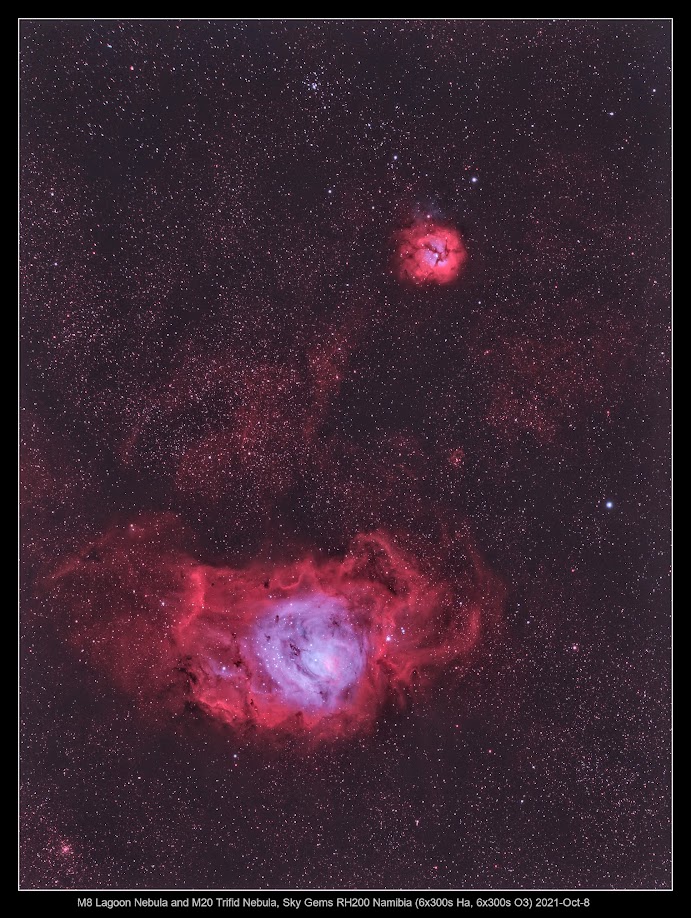 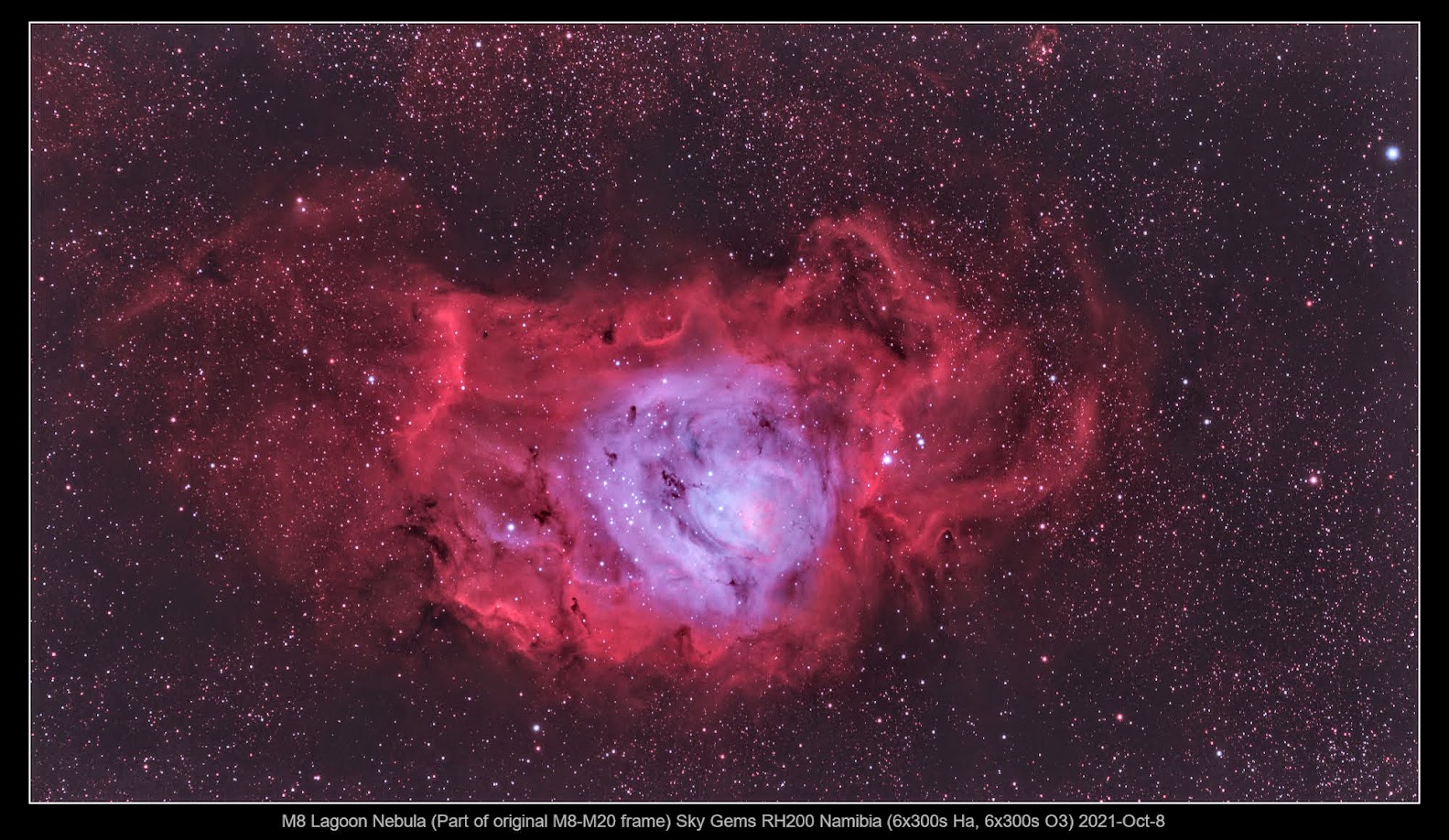 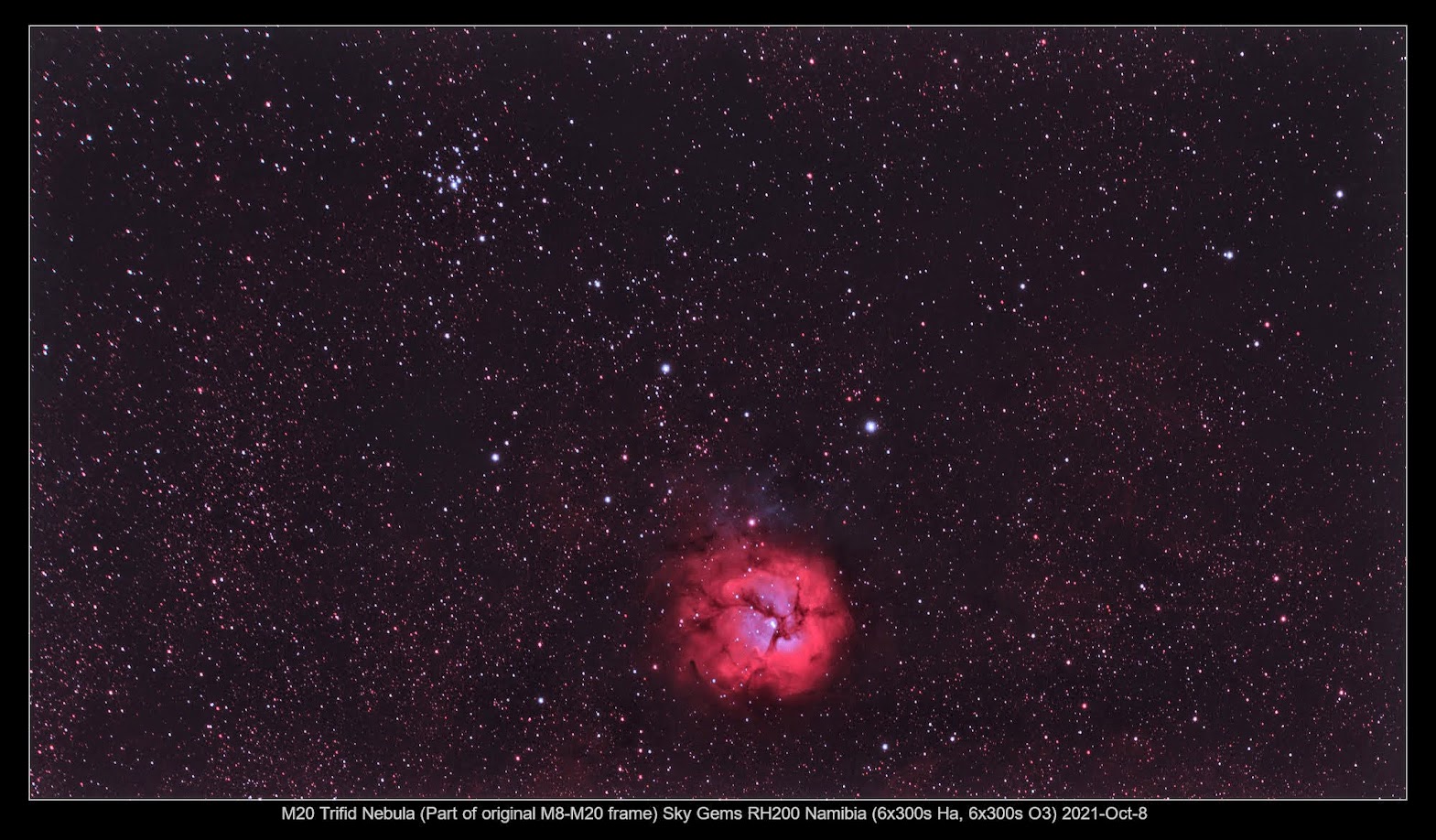 Due to the fast motion of the comet, it would be a pain to shoot LRGB and then combine the exposures. So I just went for L frames only, but then added color data to M1 and the comet using my last year's M1 shot and a June shot of 7P (oops, different comet!) 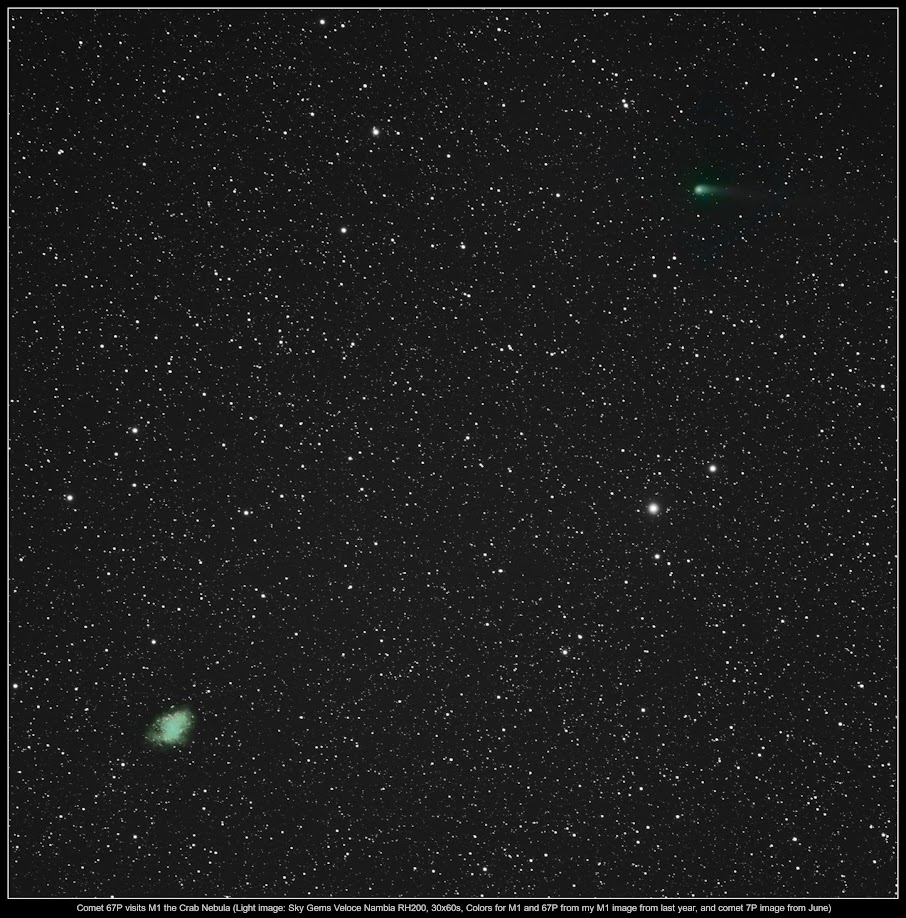 It is a great time for Sg astrophotographer these few days: clear nights near near moon -- quite precious and cannot afford to miss the opportunity for enjoying and photographying night skies.

After sunset, I went down to a place in LCK, a deserted track with no street lights to bother me. It is amazing to see so many stars once again -- and better still it was cloudless. The 2-day-old crescent moon sit very low above the tree line. Jupiter and Saturn were shining overhead -- to the east of milky way -- well, I was not sure if I made out the milky way core under the terrible light pollution, but the view of blazing Venus in Scorpius is a definite joy. It has finally crossed the Libra-Scorpius border. And it is steadily moving to cross the milky way core region till Nov-Dec this year. 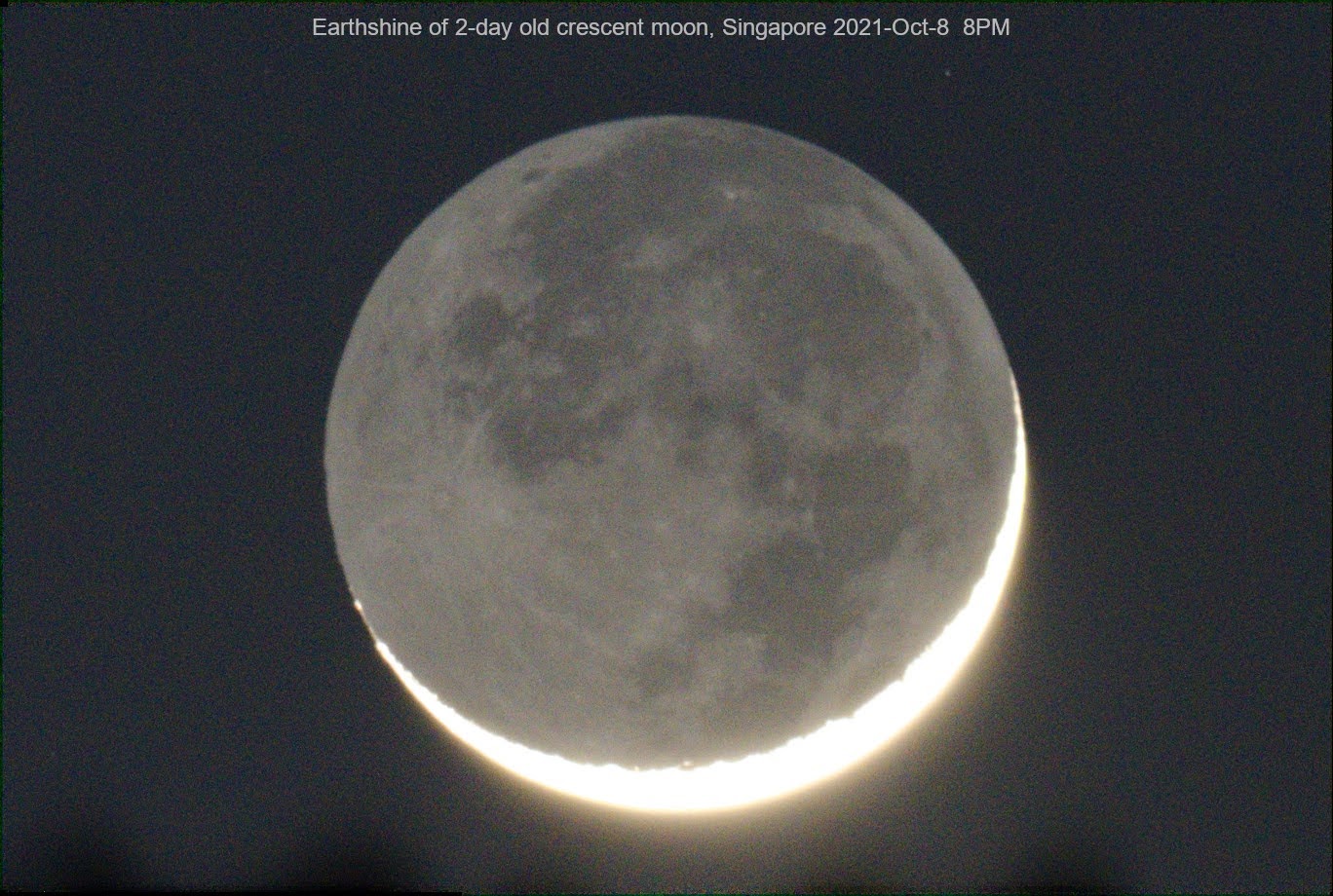 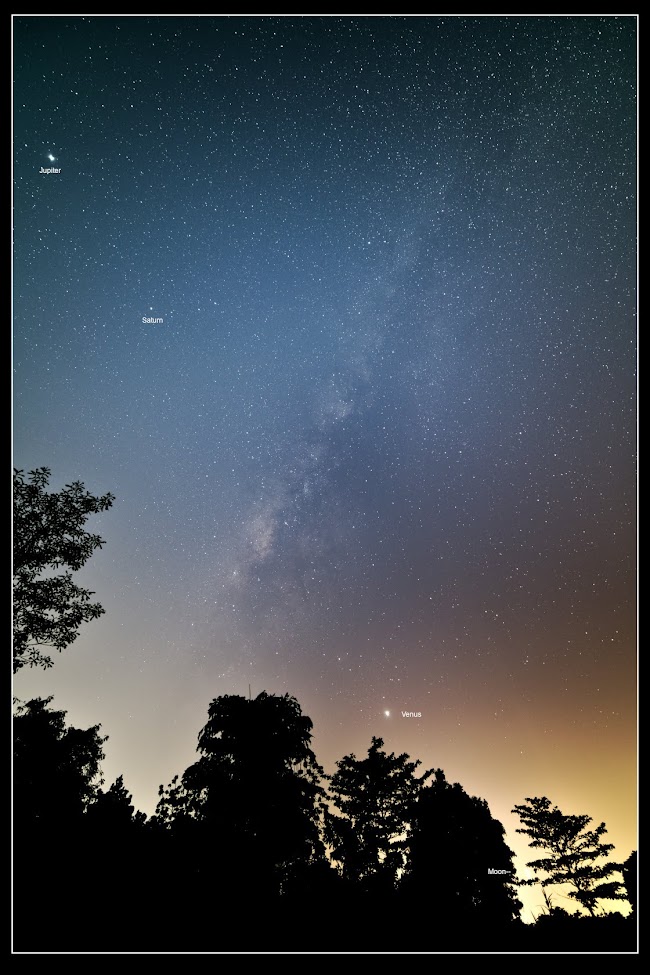 Jupiter+Saturn and Venus on either side of the Milky Way: 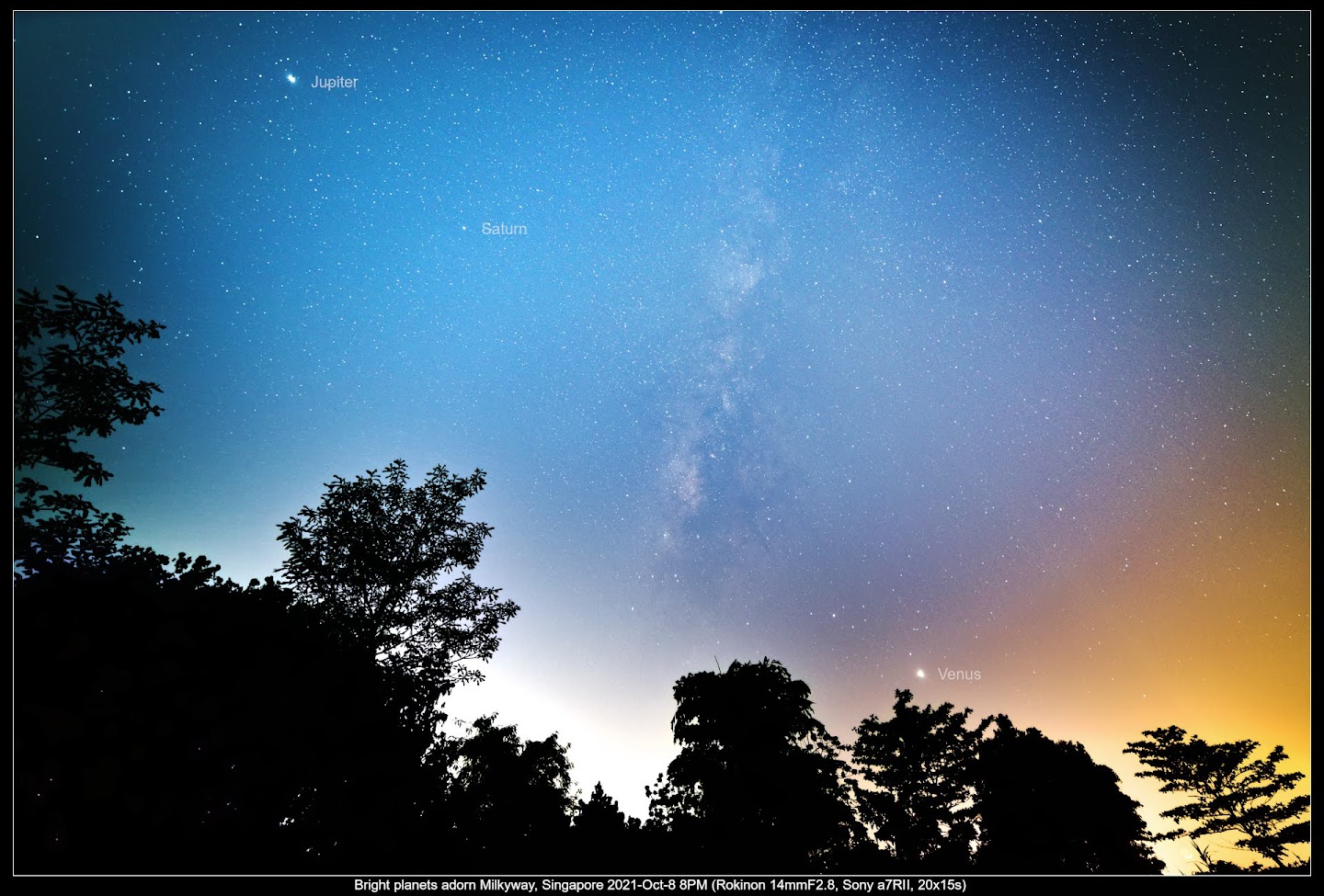 24mm offfers to see more features in the MK core region. This is slightly cropped so the apparent FOV might be that of 35mm. 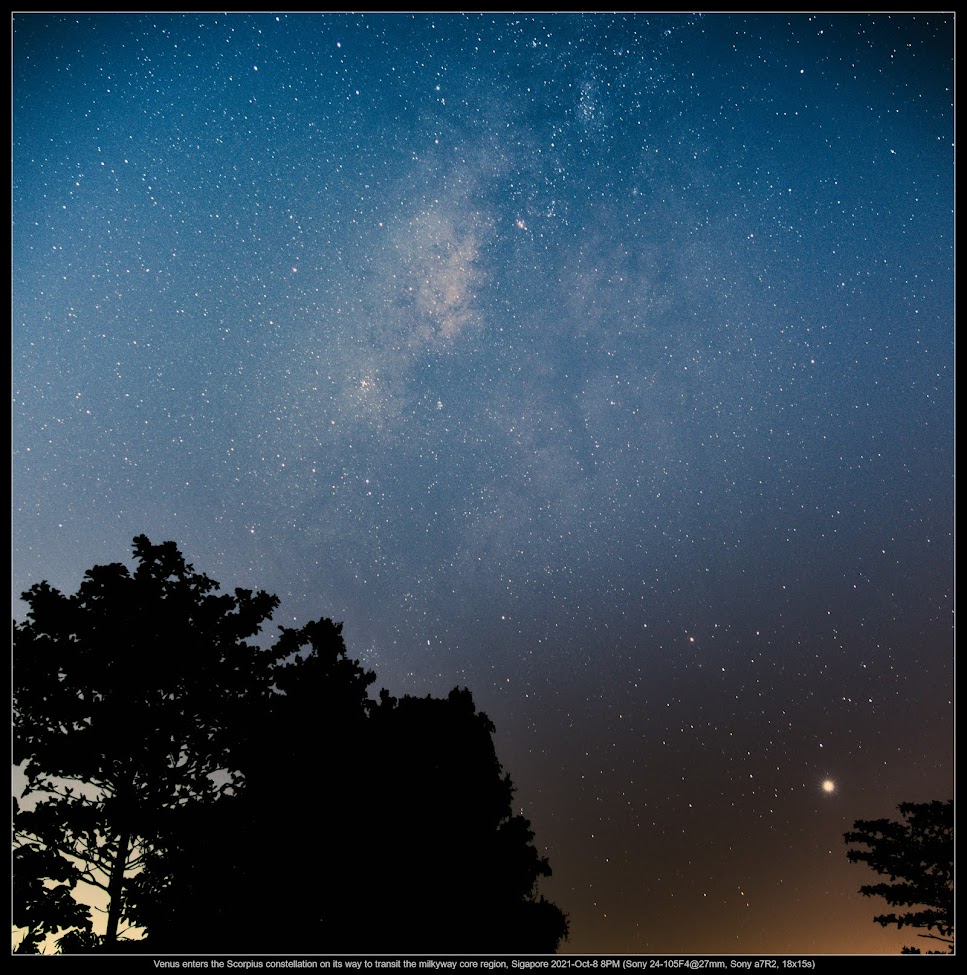 Then I packed up and headed for the next location on the bank of the upper Seletar reservior.

I probably took a whole hour there setting up my gear and aligning every parts and functions that have to work precisely and smoothly for my longer exposures of M31. Well, I had not taken any nice shot of the galaxy despite a couple of attempts last year. Would today be different?

It went well, and 2mins exposures by ASI2600MC at 332mmFL+3.76um pixel showed consistent nice pictures of tight and round stars. Looked I could go on and let the ASIAir carry on to collect hours of data tonight.

Unfortunately, the mount stopped working. Then I figured out the battery pack that I was using for the mount might be responsible -- the batt LED was on though but the mount's LED turned off automatically after a short run each time. I could use the 12V hub built-in the ASIAir Pro -- only if I did not forget to carry one more male-male 12V cord.

So the next few hours I was trying to hook up my a7RII, aiming and centering manually the target, and get the autoguiding work again. Long story short, I made new mistakes and ended up with ~60 subs and about ~40 subs on either side of the meridian. OMG the two sets are of different orientation all because of my human error.

The 60x60s set of subs, when stacked, are a total disappointment back home on my computer doing processing. 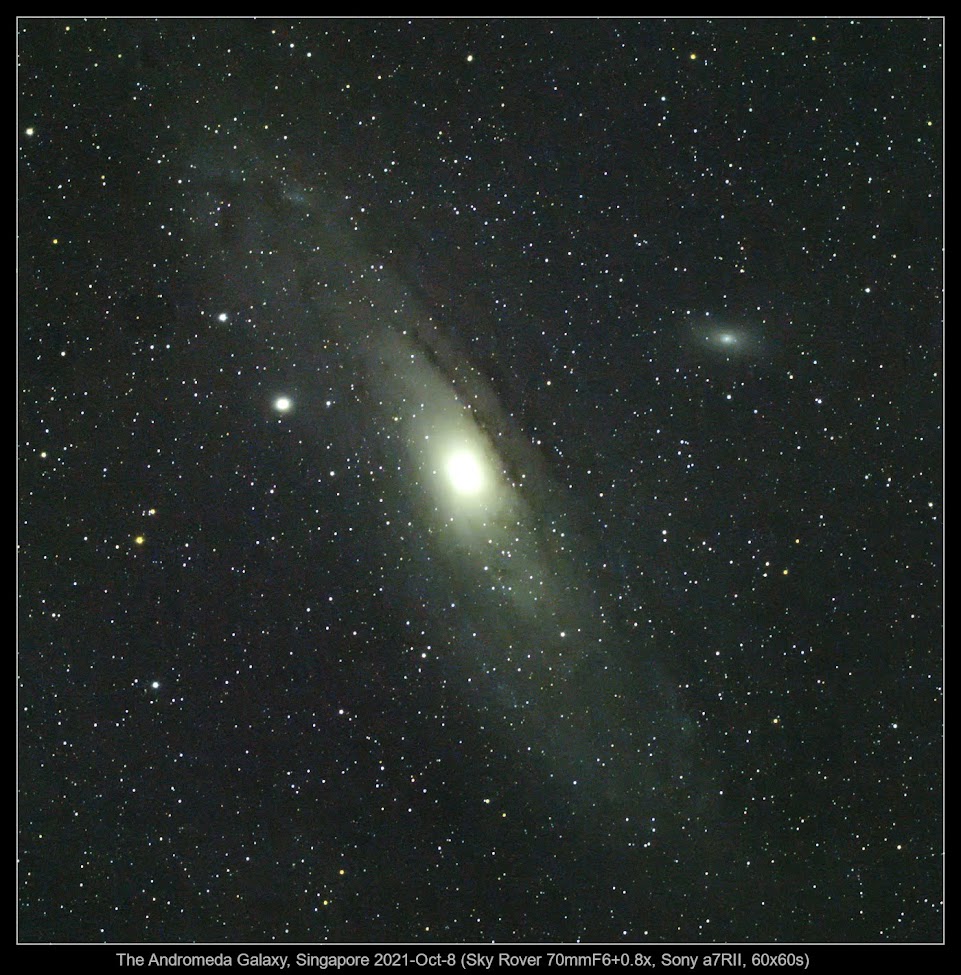 I knew my precious few hours of night time went for nothing in the end. Or the failure might have taught me many things.

I then went to process the only 10x2min exposures out of ASI2600MC. Turns out much easier to process and the result is noticeably better. 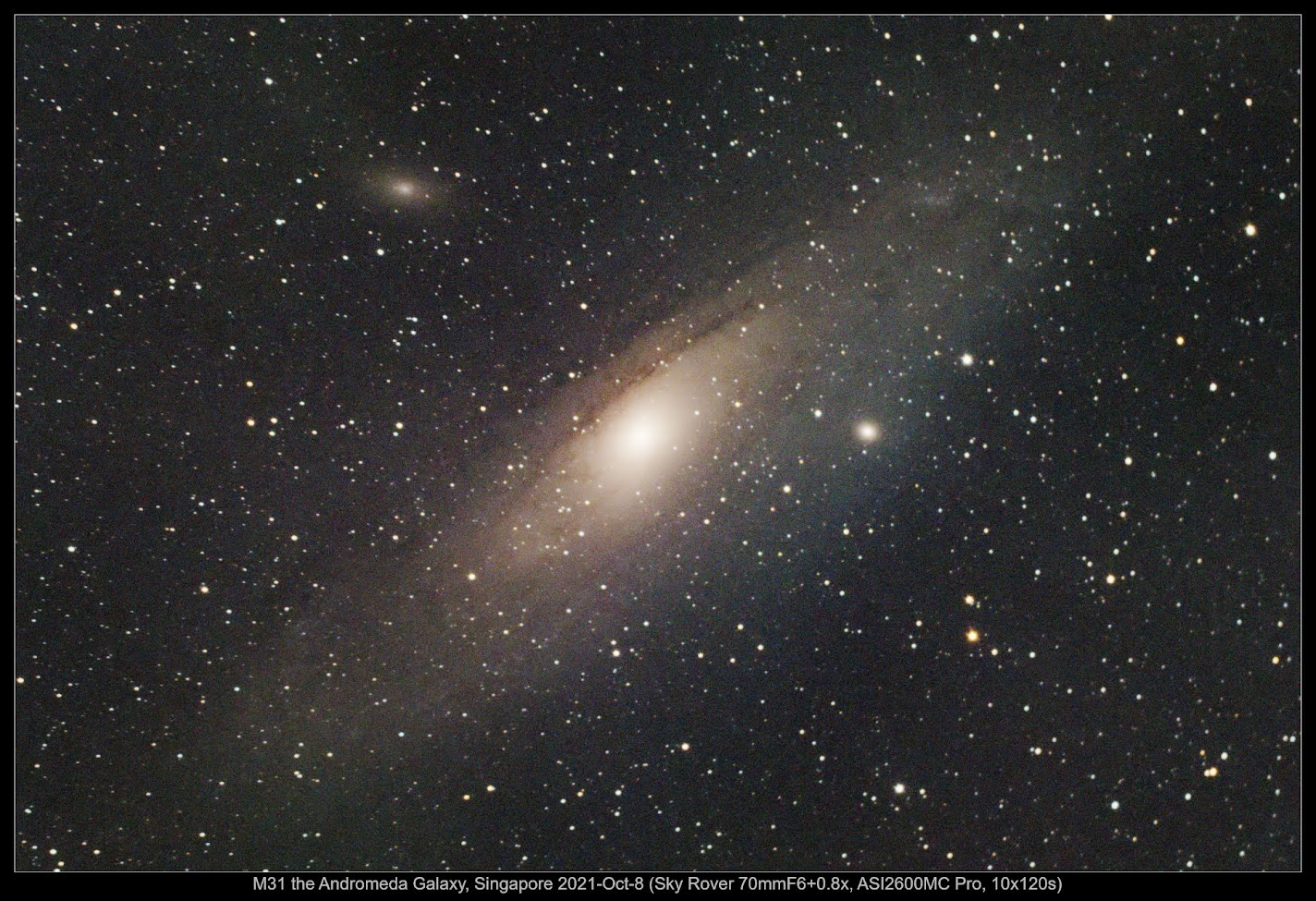 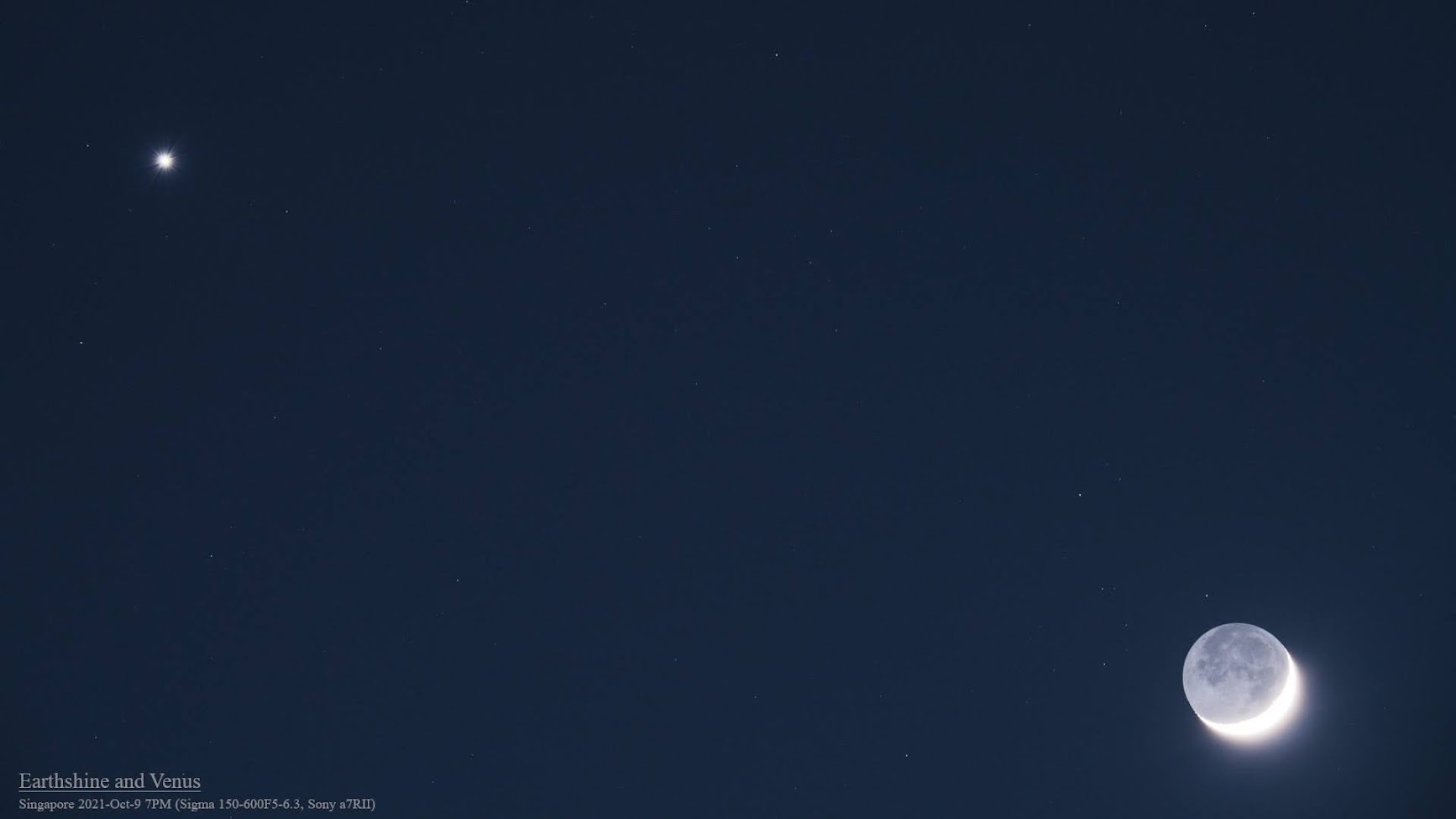 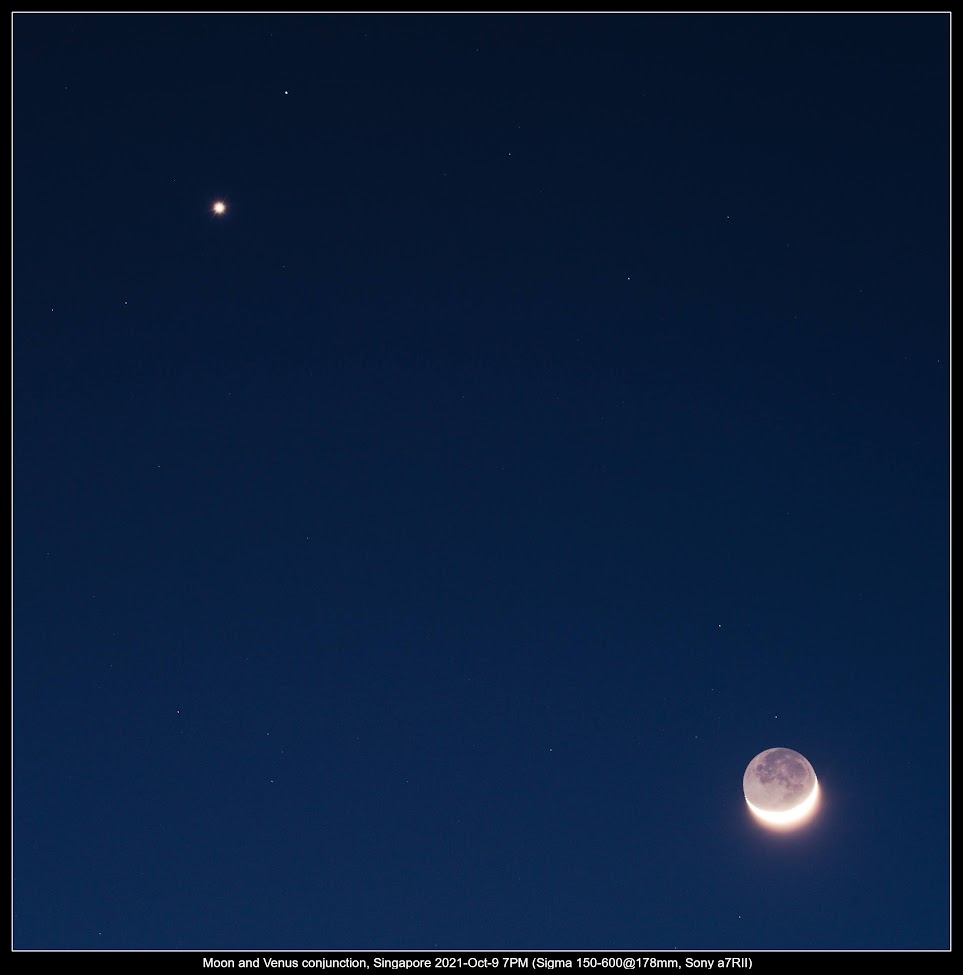 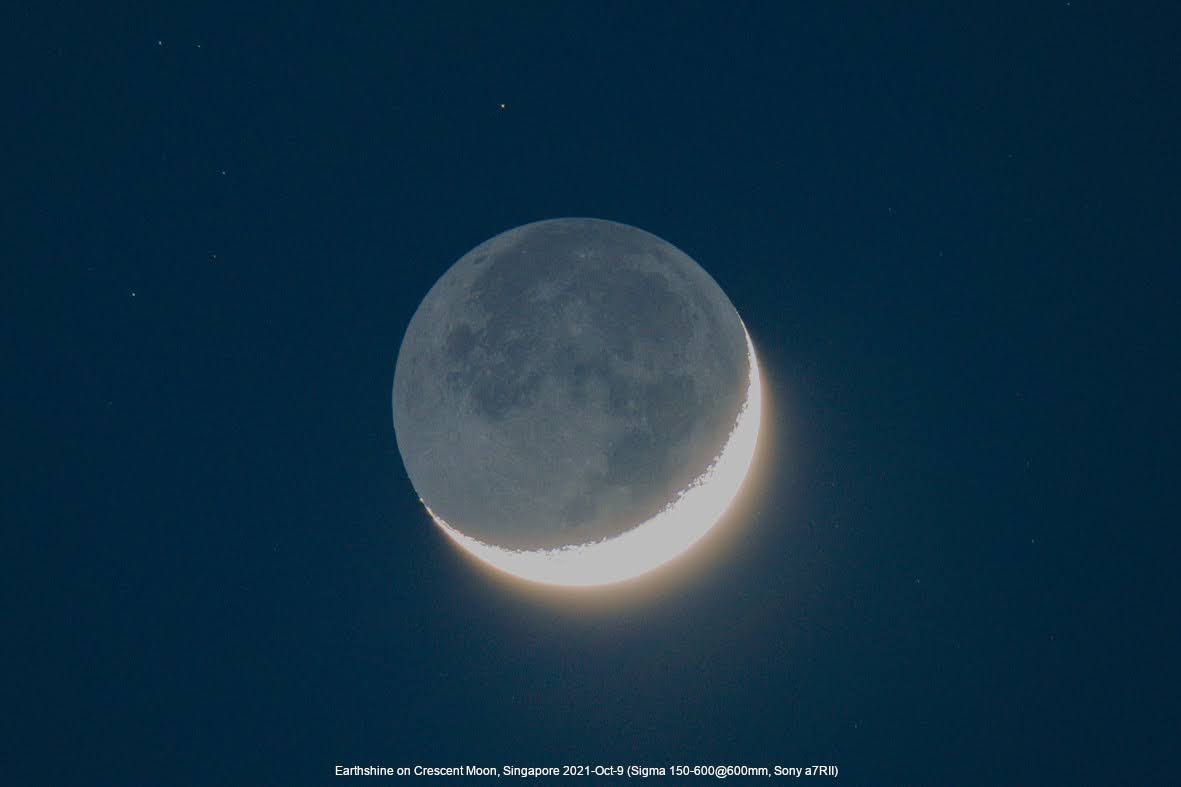 And, to my delightful suprisise, my 2x30s managed to capture part of the milky way core region, against all the odds (clouds, lights in town -- a few directly shinning into my lens, tracking error spoilt other exposures, lower altitude) 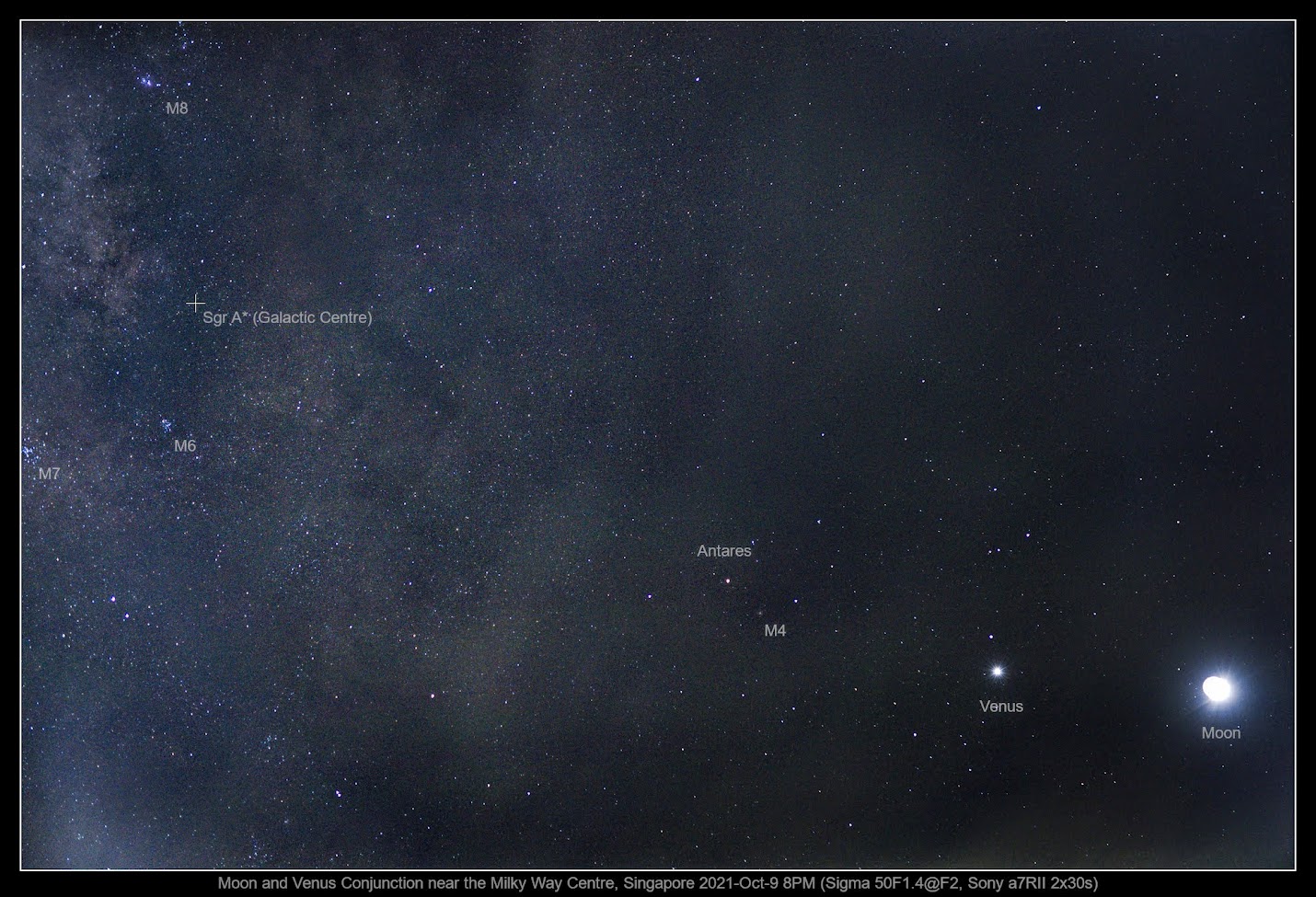 Nice set of photos from the past few nights, sorry to hear about all that technical difficulties, hope nothing was badly damaged.
I was trying to shoot andromeda too but I think I could only manage less than 1hr before it being blocked by a building.
Top
Post Reply
340 posts