Wanna make a scope? Or better still, grind a mirror yourself. Or, you have some good tips in making a really useful accessory? This is the place to show what your hands can do...
Post Reply
6 posts • Page 1 of 1

I've been wanting to own a dob for a while and also wanted something airline portable. Well there aren't many options on the market so I went from toying with buying a Sumerian or Hubble Optics to saying "hey I'm an engineer I should build it myself". It started as a way to save some money, or actually just an excuse to prove a point to myself. Then one day I found a good deal on a Skywatcher 250P F4 and I said okay this is it I'm committing myself.

Things went from trying to build a cheap wooden dob, to realising even that wouldn't be cheap and deciding to go with a zero compromise design and machine all the parts from aluminum.

So on to the unconventional design. This is a strut and "string" dobsonian - comprising struts (poles) to carry compressive load and taught strings (wires) to carry tensile load. This means that each member in the frame carries load in only one direction, reducing the compliance (flexibility) of the joints.
Thus the pros of this design are that it is lighter, as less poles are required, and the connections of the poles do not have to be as rigid since the strings will be pulling in tension and while poles are in compression. This meant I could simplify the Upper and Lower Telescope Assemblies (UTA & LTA), using only a single plate with holes for both.
Well all that is theory, you don't often see string dobs around so I was a little apprehensive.

Fast forward more than a year of conceptualising, designing, ordering, and assembling... ... 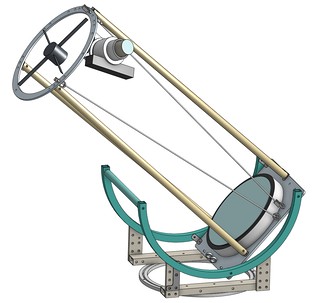 Unpacking and assembling in real life... 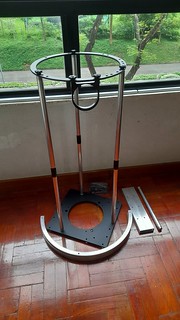 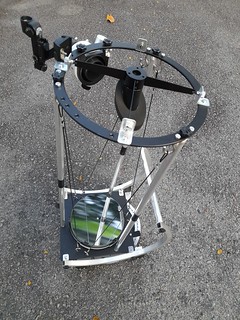 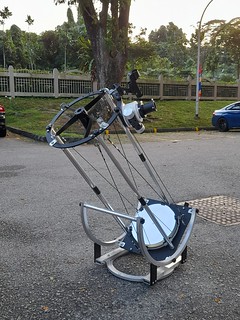 So far pretty happy with the stiffness of the OTA frame; it seems to hold collimation pretty well and I'm quite surprised that I managed to achieve decent stiction with just PTFE tape directly on the bare aluminum altitude bearings. But there is some play in the azimuth bearing as I used lazy susan bearings for that. Still need a shroud, mirror covers and coma corrector, then to figure out how this can all pack into a suitcase!
https://www.instagram.com/cosmic_palette/
Top

WOW that is sick!!
Top

Nice work. Is it still airline portable? Looks quite bulky. Also, with the mirror so exposed, do you have dew issue?

Just wondering, where did you go for machining? Any good local shop?
Top

The whole thing weighs about 10kg! My plan is to pack it into a medium size suitcase (~26in) and if flying hand carry the mirror. I'm making a shroud from photo backdrop cloth because it is basically useless for deep sky with the mirrror so exposed, so maybe that might be enough for dew. Things are still very much in a prototype state for now...

Everything was manufactured on taobao, tons of vendors there and super good service.
https://www.instagram.com/cosmic_palette/
Top