CCD vs Film? Lots of time vs no patience? Alright, this is your place to discuss all the astrophotography what's and what's not. You can discuss about techniques, accessories, cameras, whatever....just make sure you also post some nice photos here too!
Post Reply
195 posts

What a sighting of ISS zooming across the sky!

Thanks to https://www.heavens-above.com/, I can have very accurate predictions of the ISS passing Sg skies.

The ISS's passing this morning was quite bright, at a visual magnitude of -3.9.

The weather was however quite unpredictable and had been cloudy and rainy all night. Luckily at the time of the ISS passing, the skies were not so cloudy and the presence of high think clouds did not bother too much for watching the bright objects.

The final image composition was not ideal -- I made some mistakes. But I was absolutely hooked when I was adjusting my camera settings while noticing a very bright point approaching from far north -- just past the bright star Vega.

That's more than 1000km away. At an approaching speed of nearly 8KM per second.

The next few seconds were chaotic when I had to tune the exposure settings, activate my remote control App on mobilephone, and .... I actually don't remember much -- just being excited.

The closest approach was 400km+.

When ISS had passed my camera view, I took up my binoculars to watch it -- it looked like a flying Venus -- with a bright halo around it -- the illuminated cirrus clouds.

The next moment I took out my mobile phone and snapped a few pictures in the hope to capture its fast motion in a wide view.

And indeed I am quite proud of mankind making such an amazing thing. 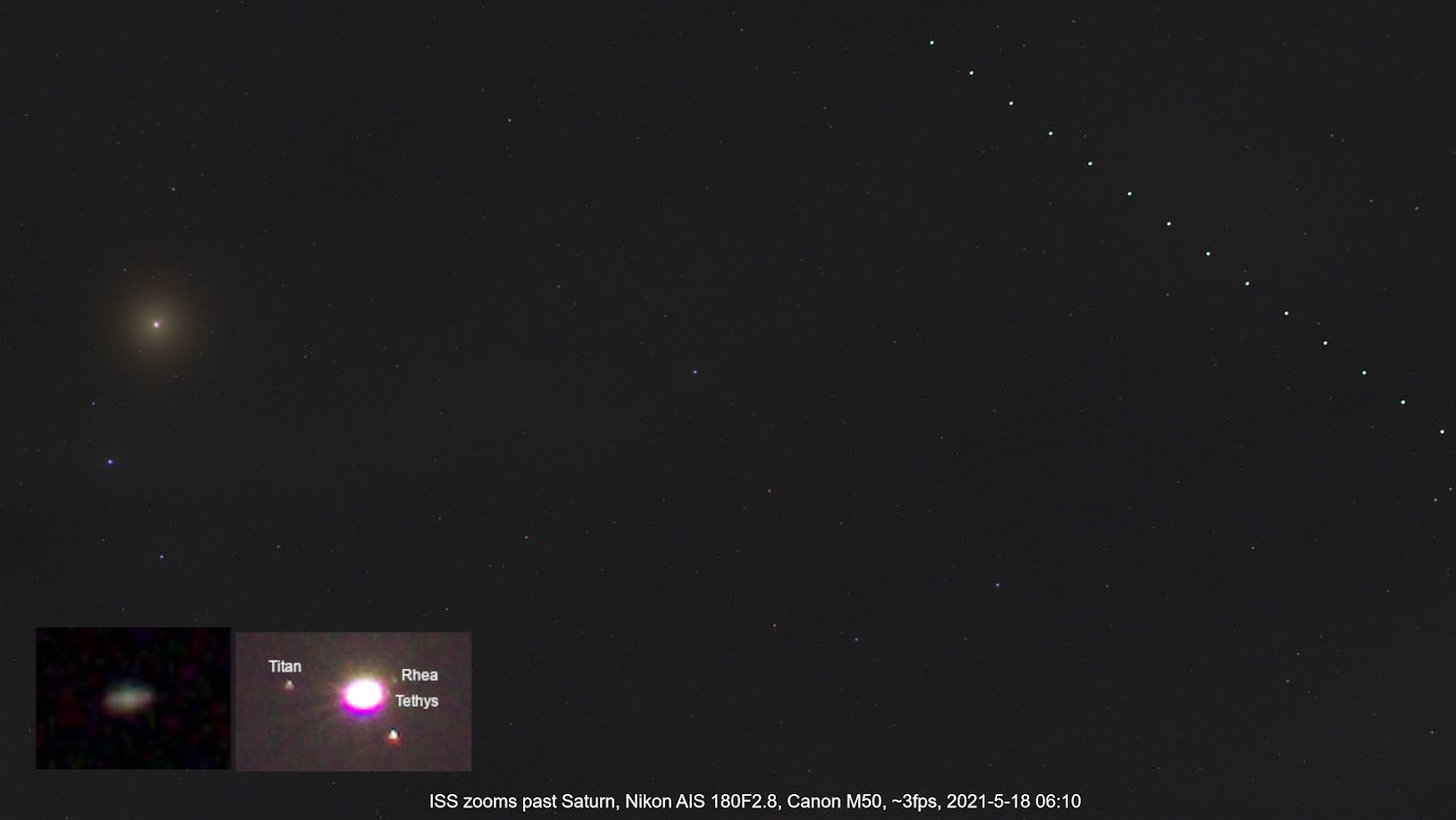 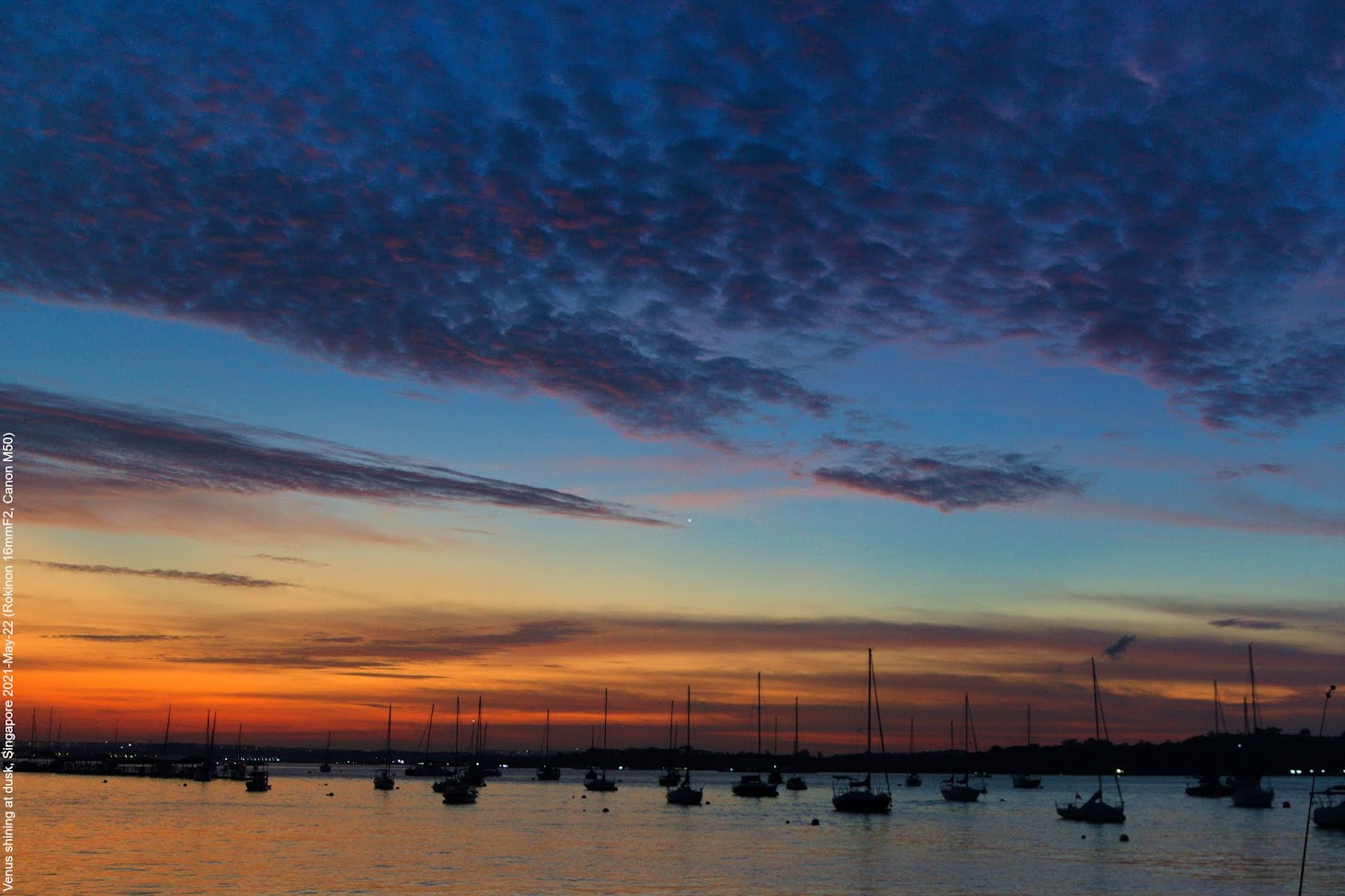 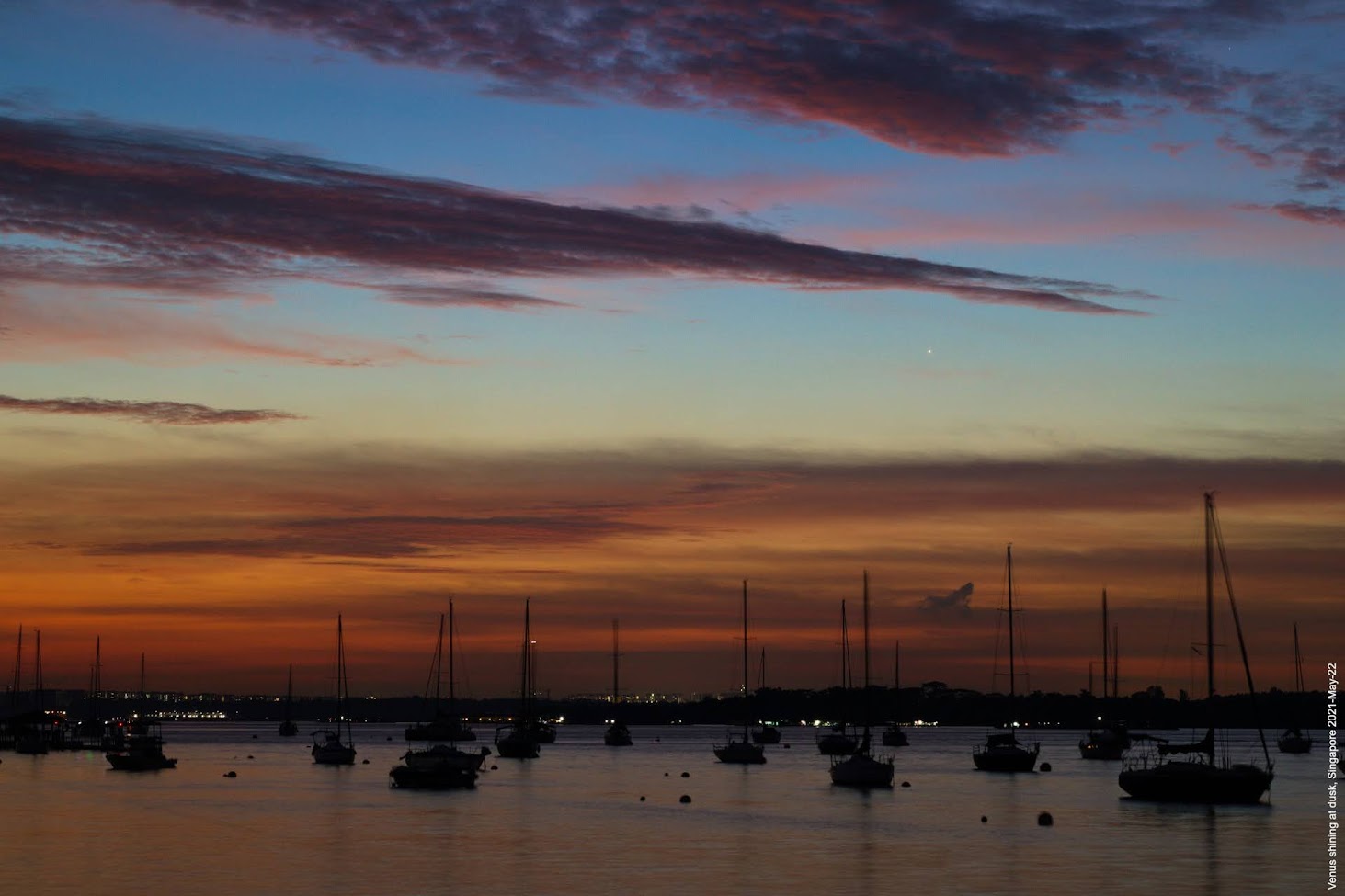 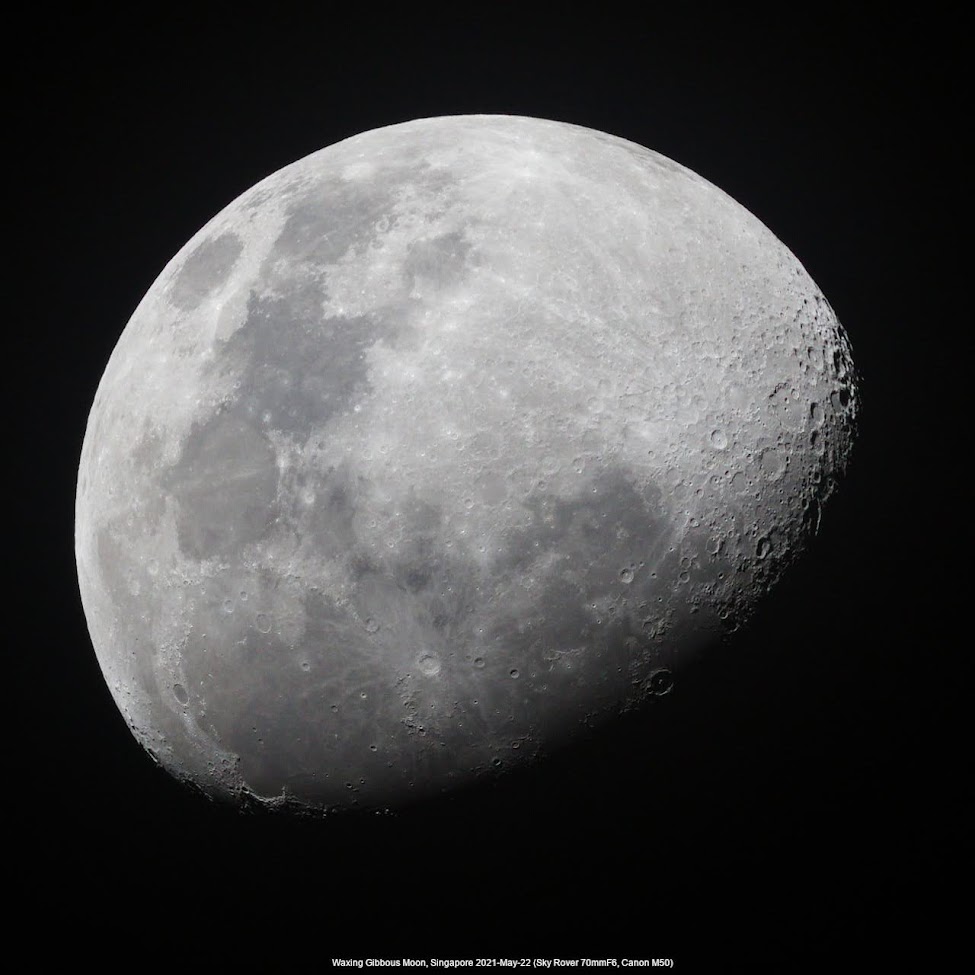 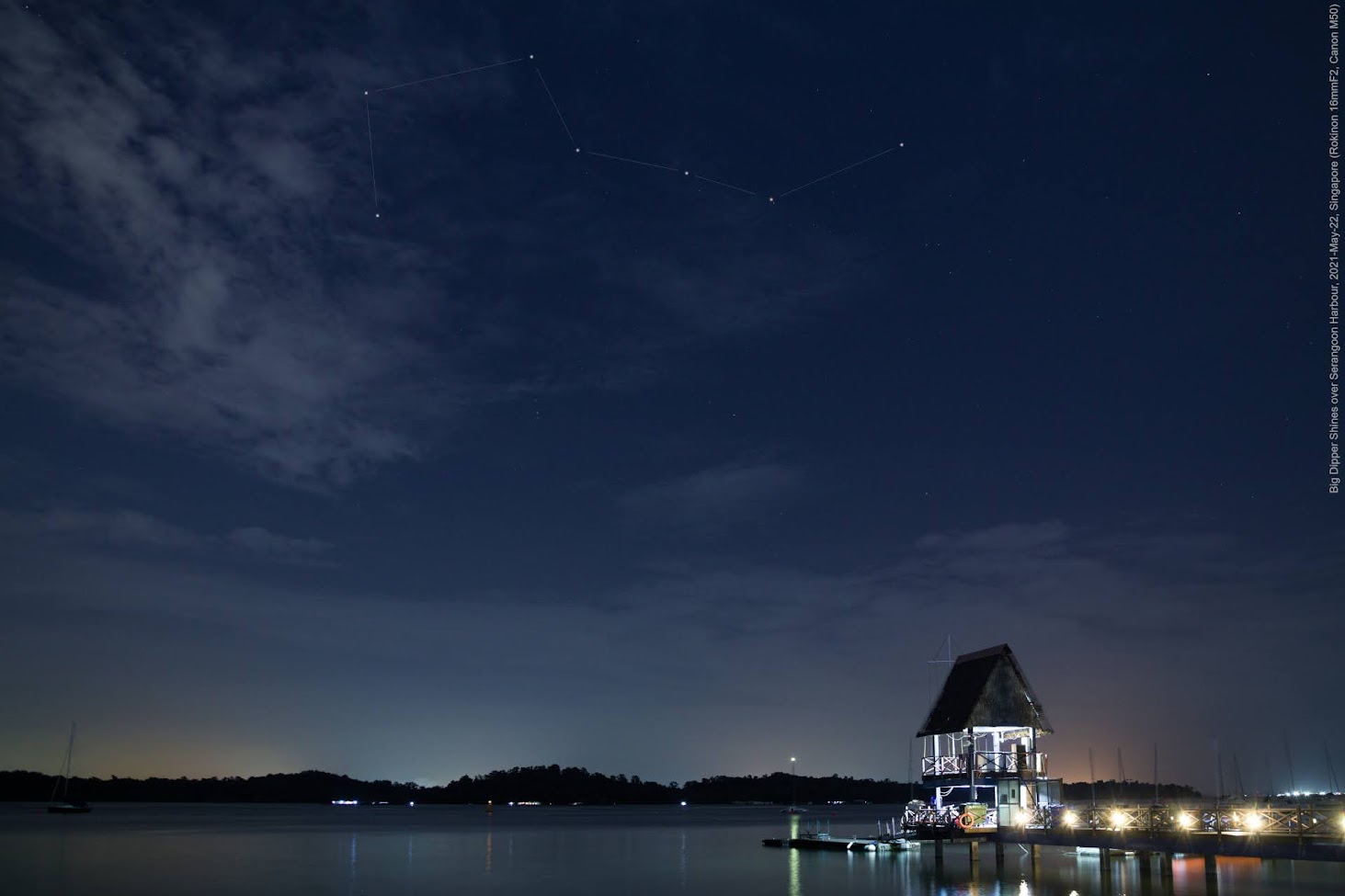 A moon-total-eclipse photography trip plagued by clouds and more

Went to Changi beach with family and set up the gears -- even before going down I already knew the chances of catching a glimpse of the eclipse would be super super thin. I kept watching weather satellite imagery update and in the afternoon, a rain cloud belt came down from north just in time to totally cover the entire process of this lunar eclipse.

So I could see many disappointing faces besides their cameras at the beach. But I was the only one that stayed on until the total eclipse had ended.

Then I felt terribly unwell -- something like stomach flu and dizziness. I dragged my gears back to the car, and spent the next two hours in the seat until I could drive again. Huge thanks to my caring family.

But I was not empty-handed when back. There was a moment my camera captured smeared images of moon (minutes past total eclipse phase) behind the clouds. Here are two of the best shots then, in comparison with a skymap for reference. 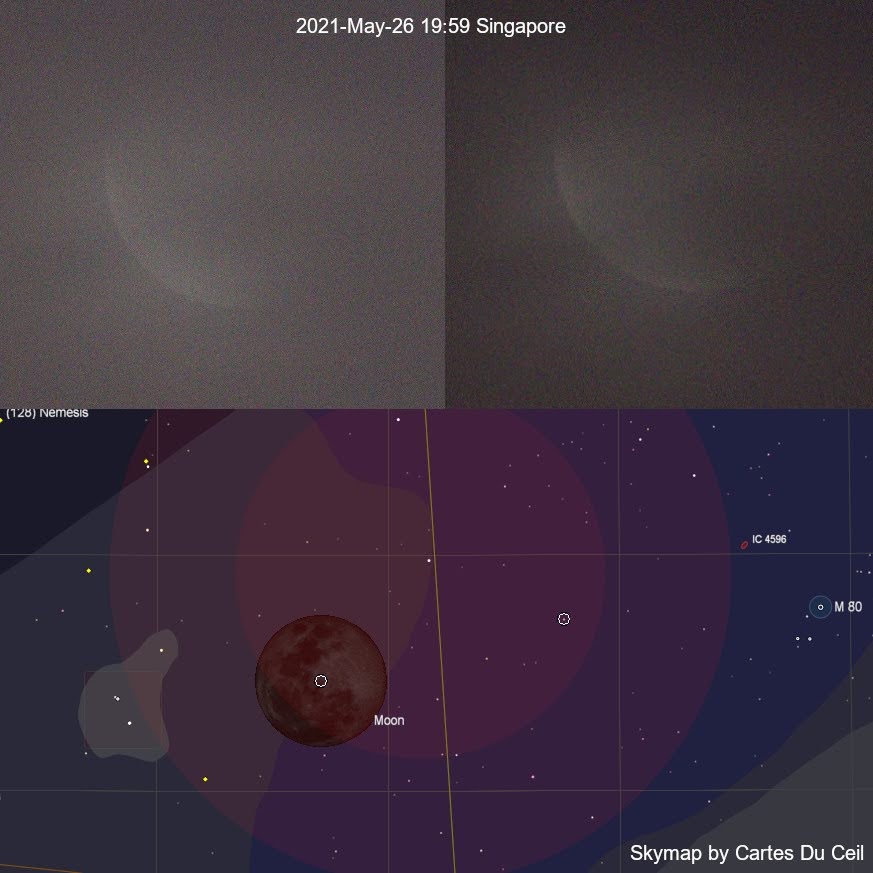 The next total eclipse visible from southeast-asia will come no sooner than the total lunar eclipse on Nov 8, 2022. What will be the weather like then? Notice that's the beginning of the year-end super rainy season. Fingers crossed.

A backup plan will be an overseas trip, if necessary.
Top

Great work on the attempt to capturing the lunar eclipse! I simply gave up on imaging due to the weather and how low the Moon was during totality.

It's always the process and untold hard work that goes behind each picture that counts in astrophotography, not the images by themselves.
Top

Good attempt, hhzhang. Some did manage to capture good photos after the eclipse was over but it depends on where you were because of the clouds.

I couldn't be bothered opening up my observatory when another member was opening his, so I sat next to him and we got some reasonable results considering it was cloudy, windy, and raining here.
Camera was a Canon 450d in an ED80 on HEQ5 mount. Captured with Backyard EOS, 7 seconds @ 800iso.

Here it is during totality:

Moon-Eclipse-260521-7.jpg
You do not have the required permissions to view the files attached to this post.
Cheers, Ken

I couldn't be bothered opening up my observatory when another member was opening his, so I sat next to him and we got some reasonable results considering it was cloudy, windy, and raining here.
Camera was a Canon 450d in an ED80 on HEQ5 mount. Captured with Backyard EOS, 7 seconds @ 800iso.

Here it is during totality:

Fabulous! Have to admit that even if we could get nice clear weather on the day, we would never get any decent deep photography of the totality -- the altitude was way too low. How I wish I was in Down Under at the time too!

2021-5-29 This evening I could finally get a glimpse of the conjunction of Venus and Mercury, through the gaps of clouds.
It is not meant for a nice astrophoto, but an imagery record anyway. It also reminds me of the joy of watching the two through my pair of binoculars. 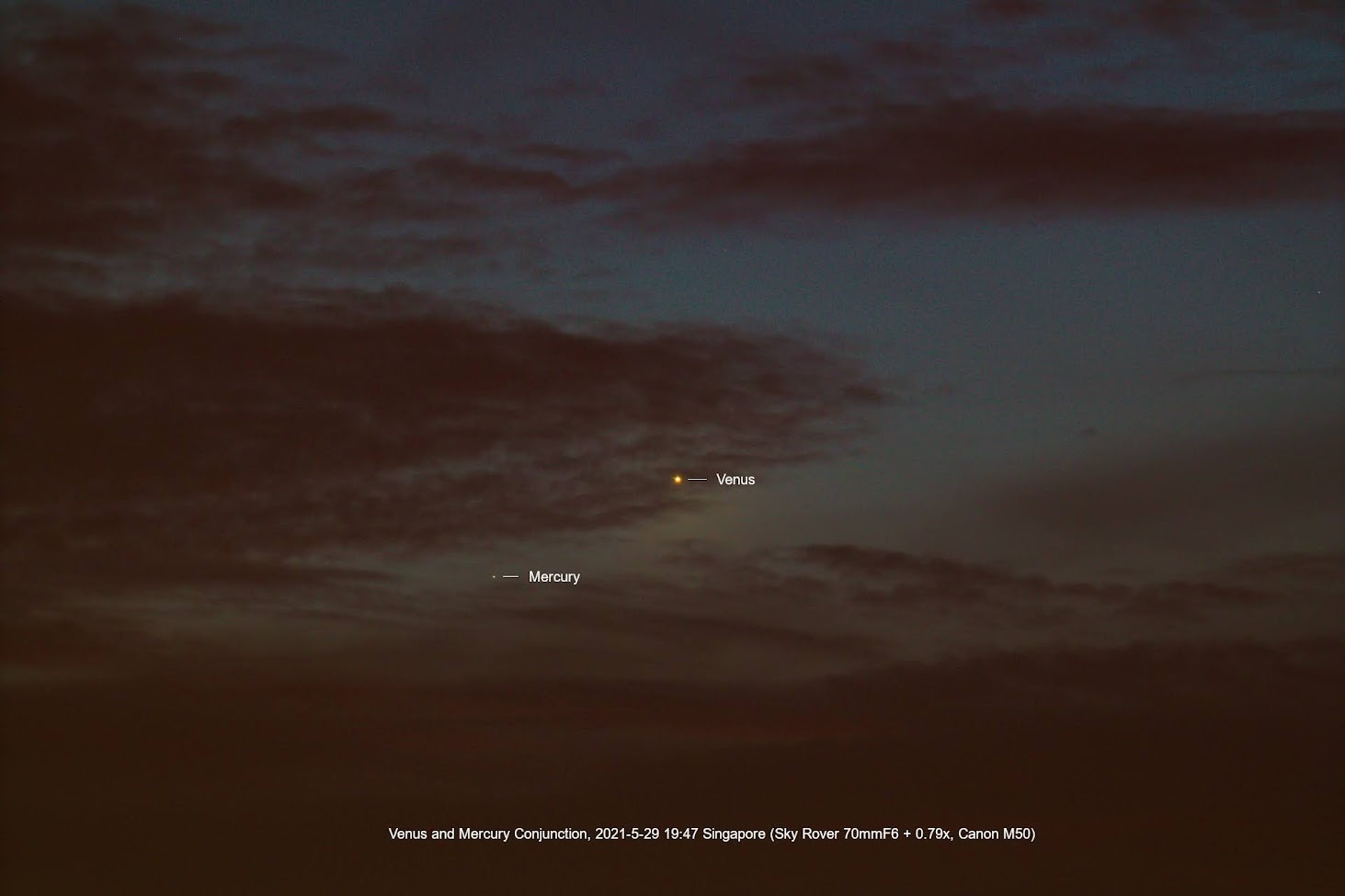 The closest approach actually happened last night (or this early morning) but the two were still fairly near today and could easily fit into the telescopic view. The two are parting each other rather fast. While Mercury is heading towards the Sun and will soon become a morning star, Venus is heading east and will catch Mars up in July -- there will a nice view of three pieces of celestial jewelry side by side: Mars, Venus, and a thin crescent moon. Clear skies, please!
Top

Venus keeps climbing up and gains better clearance from the major clouds. Unfortunately Mercury is a couple of degrees lower and cannot shine through the high clouds. 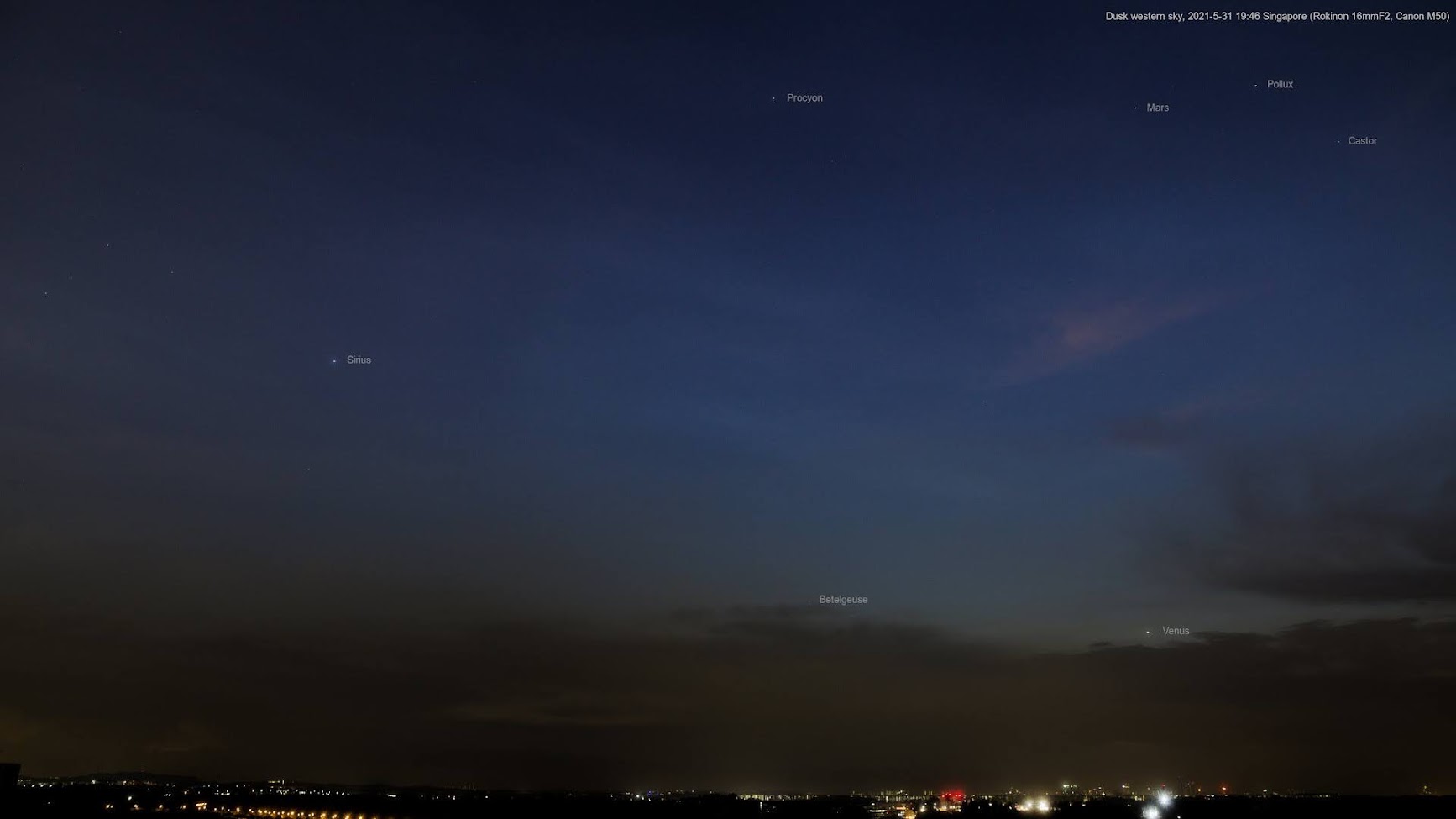 Still a long way to go for Venus to catch Mars up.
Top
Post Reply
195 posts