CCD vs Film? Lots of time vs no patience? Alright, this is your place to discuss all the astrophotography what's and what's not. You can discuss about techniques, accessories, cameras, whatever....just make sure you also post some nice photos here too!
Post Reply
10 posts • Page 1 of 1

Gotten my star adventurer tracker recently, tested it out with the orion nebula.
Results was quite similar to my first M42 untracked shot with 390 light frames.
Taken under my block at Bukit Panjang.
How much more integration time do I need to get the horsehead? 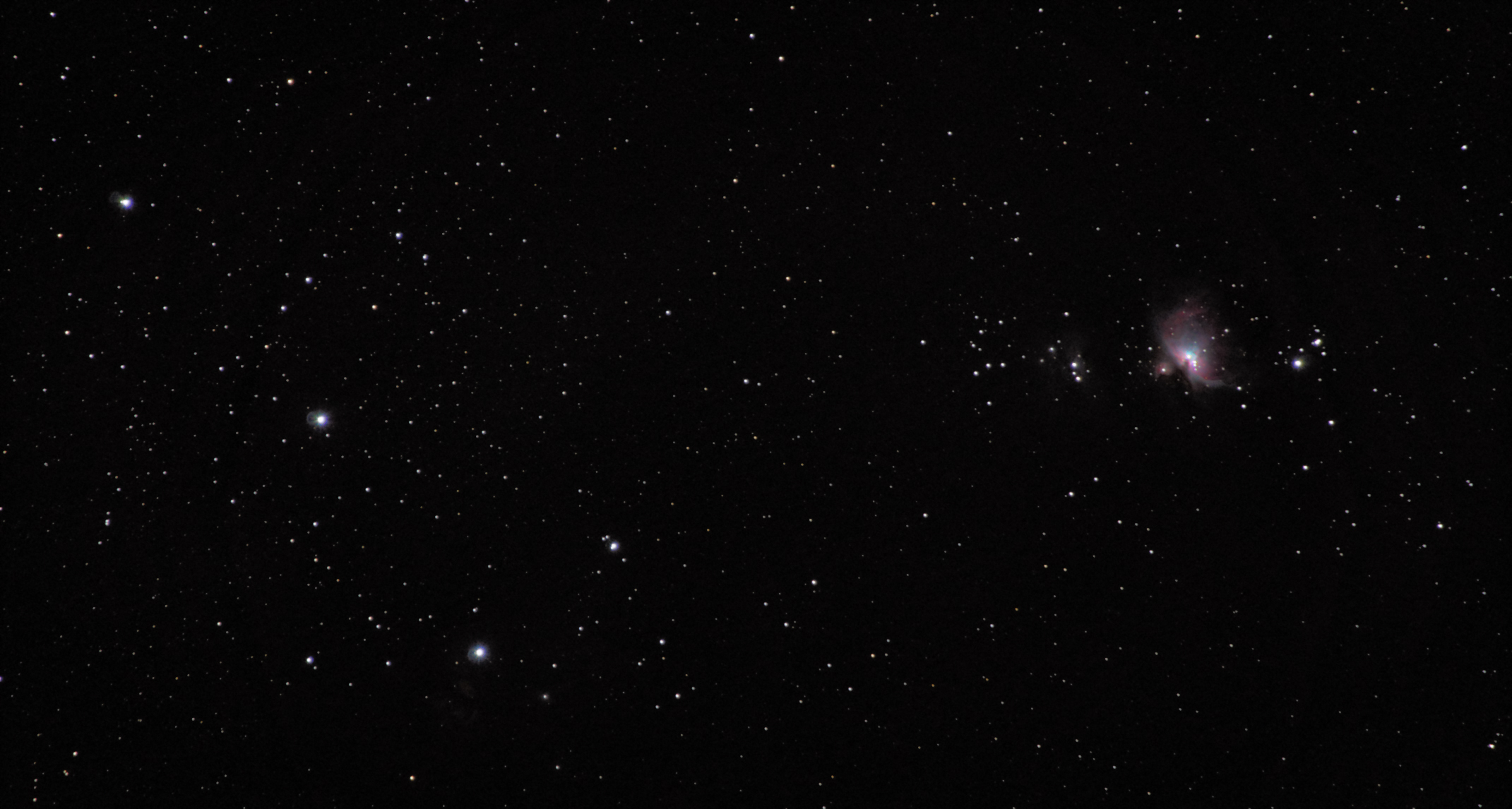 Drift alignment was really a hit or miss for me. I only did alignment using an overhead star.
Sometimes able to get no star drift for 60sec exposure at 135mm with just pointing north using a compass. Sometimes I get star trailing which then I have to correct.
drift.jpg
Compared to other drift alignment tutorials http://www.cwjames.info/astro/howto/pol ... nt_ccd.htm, my trails are vertical instead of horizontal, is it because of my camera orientation? It's orientated in portrait format while pointed overhead.
Also my trails move in the other direction instead, is it because I pressed the button the other way round? I pressed the front button first for 30secs then the back button for 35secs.
In this scenario, the correction would be opposite right? Meaning the above south drift would be corrected by turning the mount clockwise, which seemed to work.

Any tips will be much appreciated!
You do not have the required permissions to view the files attached to this post.
Top

I recommend you get at least 1.5 hours of integration time, more if sky conditions are suboptimal. 60 seconds for each sub is acceptable for Singapore skies. With your 13 mins of data, I can see a hint of the flame nebula appearing.

As for drift, you need to know where the N/S/E/W directions are on your camera. You can do this by gently nudging the lens towards the north or south, and see where the star jumps. If you nudge the lens north, you will see the star jump towards the south, and vice versa. Based on this, you can also figure out where east and west are, but remember that the relative directions of N/S/E/W in celestial coordinates is a mirror image of that in geographical coordinates.

Based on your drift direction, the vertical axis is the right ascension (East-West direction), and the horizontal axis of your frame is the declination. But without any other information (can't tell based on the front/back button, since I don't know whether it increases or decreases your RA tracking speed), I cannot tell you whether east or west points upwards or downwards with respect to your camera screen. You need to determine this by nudging the lens in the east/west direction and seeing where the star jumps, or stopping the tracking temporarily (in which case the star will drift in the westward direction).

If your star drifts SOUTH, then you need to turn your mount's polar axis towards the WEST. When viewed from the top-down, this means your mount head needs to turn anticlockwise, not clockwise. If you find that doing the opposite reduces the drift, you might have made a mistake in determining the directions. In which case, simply adjust towards the direction that reduces the drift.
Just a casual stargazer
Top

Thanks Ivan for the detailed reply. Seems like I have my directions mixed up, need to read a few times to wrap my head around it. Will attempt it a few more times to make more sense of it.
Top

Hi Ivan . Glad to note that you have become a Celebrity. Congrats.
Kochu
Top

celeron787 wrote: ↑Wed Mar 25, 2020 9:30 am Thanks Ivan for the detailed reply. Seems like I have my directions mixed up, need to read a few times to wrap my head around it. Will attempt it a few more times to make more sense of it.

No problem. It's difficult to explain these in words, but my main tip would be to really familiarise yourself with the directions (N/S/E/W) when you're looking up at the sky. That way, no matter where in the sky you're pointing, you would have a rough idea of where each of the four cardinal points are.

Thanks Kochu. I think 'celebrity' is overstating it. But I hope it at least makes more people in SG interested in astro

ivan wrote: ↑Thu Mar 26, 2020 1:51 pm Thanks Kochu. I think 'celebrity' is overstating it. But I hope it at least makes more people in SG interested in astro

Enthusiastic evangelists like you are getting so few these days, Ivan...keep it up!

Managed to get a decent 2min exposure (135mm) on procyon which was overhead.

Unfortunately, due to camera limitations, I'll probably stick to a maximum of 30sec exposure time.

I understand that I also need a star near the East or West horizon for altitude adjustment.
However those parts of the sky are blocked by buildings, would just a azimuth adjustment with an overhead star be sufficient considering I'm limiting my subs to 30secs?

Also, how accurate do you guys adjust the altitude to? Roughly 1 degree based on the mount markings? Or as accurate as 1.22 degrees using an inclinometer?

Thanks a lot!
Top

It is possible to get the horsehead even with 1- or 2-minute subs, but you need a very fast len. i remember doing it with a 50mm f/2 manual focus lens. However the HH was very small. When you get much above 50mm, f/2 lenses get expensive fast.
Top

Actually I've been playing around with this set of data and can see a very faint horsehead, should become more obvious with more acquisition time. I've recently acquired a redcat51 but didn't have much time to test it out due to the weather and CB. I'm also looking for a samyang 135mm F2 lens.
Top